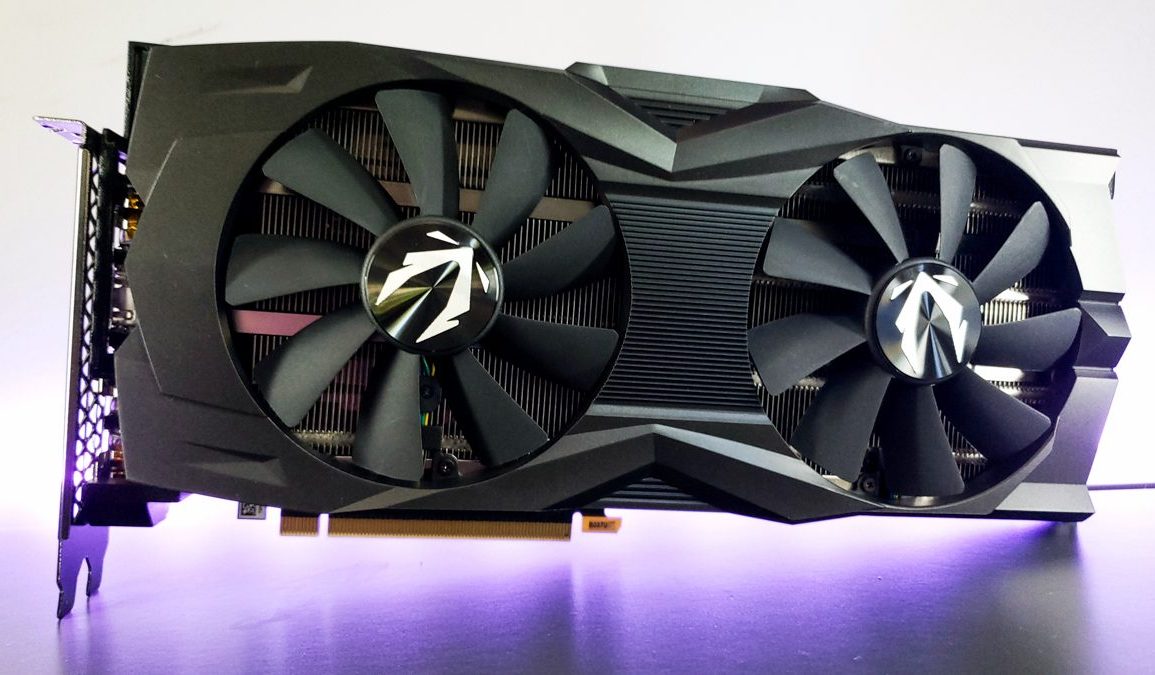 There’s been a massive amount of graphics card releases this month and the latest is NVIDIA’s RTX 2080 SUPER, which rounds out the company’s ‘SUPER’ lineup of RTX 20-series GPUs which was initially launched earlier this month. The RTX 2080 SUPER is meant to succeed the vanilla RTX 2080 as NVIDIA’s second to highest tier graphics card, with the RTX 2080 Ti still serving as flagship.

Taking a look at the specifications, we can see that the RTX 2080 SUPER is definitely closer to the vanilla 2080 in terms hardware than it is to the RTX 2080 Ti. In fact, it is using the exact same 545mm² TU104 die, except this time it is fully enabled with 4.3% more CUDA, Tensor and RT cores and the same increase in Texture Units as well.

Clock speeds are also increased by up to 6.1% and there’s a 10.5% increase in total memory bandwidth thanks to the use of faster 15.5 Gbps GDDR6 memory, which is the fastest memory clock speed we’ve seen yet.

ZOTAC has also pushed clocks slightly further with a factory overclock of 1.6% to the boost clock. This isn’t much, but ultimately, with Turing maximum boost clocks will be dynamic and vary based on the load and other factors such as cooling, silicon quality, etc.

Taking a look at the card itself, we can see an all-black design, which is definitely appreciated as I’ve never been a fan of cards with colored accents (they clash with builds!), that said, we do have an RGB illuminated ‘ZOTAC GAMING’ logo on the side, which is tasteful, but if you’re not into that sort of thing you can always keep it off. The card also features a metal backplate, with ZOTAC’s new gaming brand logo, and the company’s “LIVE TO GAME” motto.

The card measures in at 298mm (11.7-inches) long, and in terms of cooling, the card features a dual-fan configuration with two 100mm fans. It is a true dual-slot design, with a large aluminum heatsink that spans the entire length of the card.

The card is powered by a 16+4 phase VRM design, which is fed by dual 8-pin PCIe connectors, which is up from the single 8-pin and 6-pin connectors found on the reference cards. In terms of I/O, we’ve got 3x DisplayPort 1.4 ports and a single HDMI 2.0. Notably absent is the single USB-C ‘VirtualLink’ port which is also found on the Founder’s edition cards. While there are still no VR headsets I’m aware of which support this connection, it is still a drawback for any card of this price, if only a minor one.

Overclocking on the RTX 2080 SUPER AMP wasn’t the most impressive, but it never really is with a Turing-based GPU. We were able to increase the Core Clock by 60MHz and the Memory Clock by 200MHz. This gives us a peak Core Clock of around ~2040MHz in testing and a maximum memory clock of 15.9 Gbps. Those numbers are pretty good, but as we’ll see later, they don’t necessarily translate into much great performance overall.

Looking at DXR performance in a couple of the titles we usually benchmark and we can see that the RTX 2080 SUPER seems to be capable of delivering 60 FPS at 1440p with Ultra DXR quality settings enabled. Personally, I’m still not sure if Ray Tracing is worth the overall loss in FPS, but ultimately, that’s up to you to decide what’s most important to you.

For the purposes of this review, I’m going to split my conclusion into two sections. First, I’m going to talk about the RTX 2080 GPU itself, and then I’ll get into ZOTAC’s specific implementation.

So, first let’s break out some performance summary charts as you’ll no doubt want to see how 2080 SUPER stacks up against the (admittedly limited) GPUs we compared it against.

That said, compared to AMD’s newly released RX 5700 XT the RTX 2080 SUPER is 19% faster on average, which is a pretty wide margin, but again, when you factor pricing into the equation it becomes a bit more complicated. The RX 5700 XT retails for just $399, which is roughly 42% cheaper than the RTX 2080’s $699 asking price. In terms of value, it’s hard to beat the Radeon card, but if you’re in the market for a +$700 graphics card, you’re likely not necessarily looking for a value option.

I can’t help but feel disappointed by the RTX 2080 SUPER. Yes, it is the most powerful graphics card ~$700 USD can buy, but it also isn’t a whole lot faster than the RTX 2080 was at the same price point, and even that wasn’t much faster than the GTX 1080 Ti which occupied the same price point over two years ago. It just isn’t exciting the way the RTX 2070 SUPER was a few weeks ago, or even the RX 5700 series. Still, if you’ve got $700 burning a hole in your pocket the RTX 2080 SUPER is definitely the best GPU to buy, but that may be only because it’s basically the only real option until AMD releases higher-end Navi GPUs sometime in the future.

Now, let’s talk specifically about the ZOTAC RTX 2080 SUPER AMP. At $739, it is about 6% higher than the MSRP, which isn’t really all that bad for a partner card. The cooling solution does fairly well, and while our sample didn’t overclock as much as we’d like, out of the box performance was quite good. Noise wasn’t really an issue, although that is my subjective take as we don’t measure this in any scientific way. All around, the AMP is a solid performer and I’m quite pleased with the overall design of the card.