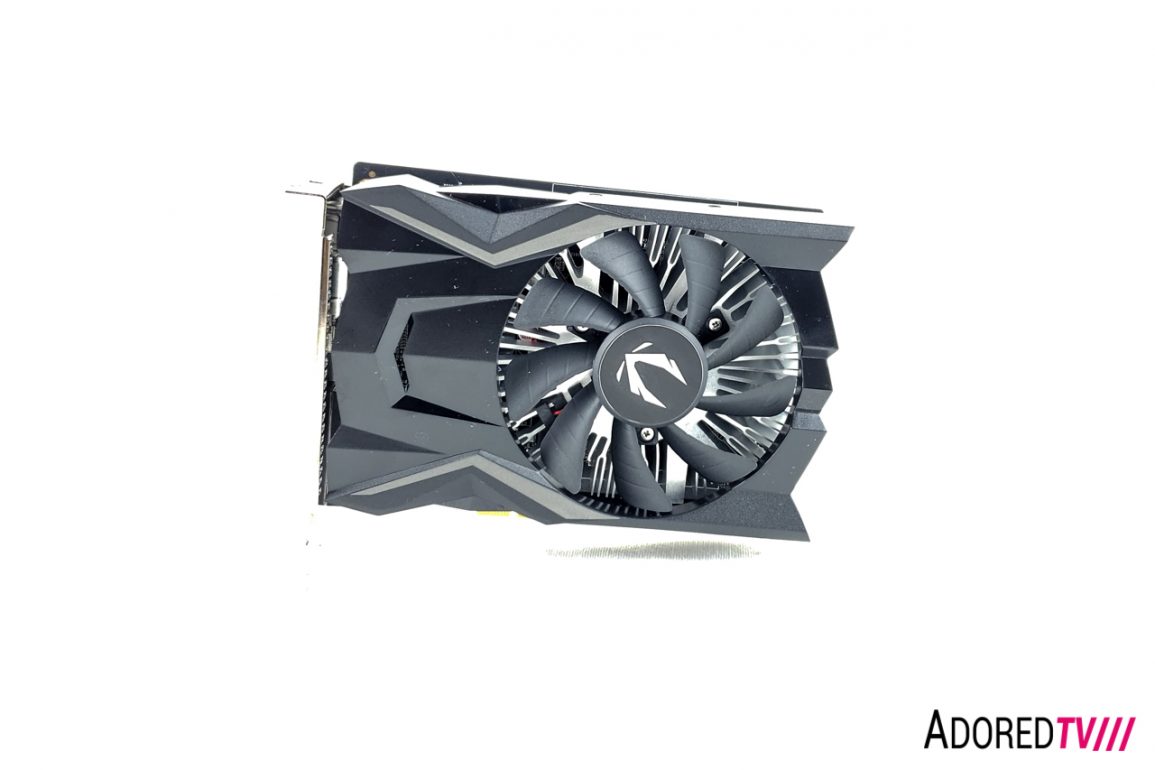 Today, we’ll be continuing our coverage of the GTX 16-series with the most recently released GTX 1650, specifically, the ZOTAC GTX 1650 OC which is a mostly reference designed card slotting in at the $149 MSRP. The GTX 1650 aims at the more entry-level of the market where 1080p:60 FPS is the target and we’ll be testing it to see how it fares against the competition.

Starting with the specifications, we see that the ZOTAC card offers a slight increase of 30MHz in boost clock compared to the reference specification. This makes sense considering this is a reference board design with no power connectors. That said, I’m not so sure the card earns its “OC” nomenclature here.

Starting with the packaging, we’ve got a fairly small box with ZOTAC’s signature gray and yellow color scheme. Around back, we have only the most relevant details, which we’ll get into next as we look at the card itself.

Taking a look at the card, we see a single-fan cooling solution with an entirely plastic shroud and no backplate. This is sort of to be expected at this price point, and I can’t really complain much. Besides, the card does look nice and clean with the all-black aesthetic.

The card features a dual-slot design and measures just 151mm (6-inches) long. As mentioned earlier, it has no external PCIe power connectors, and is powered entirely from the motherboard’s PCIe slot. Around back, we have a single HDMI 2.0b, along with a single DisplayPort 1.4 and a single dual-link DVI-D port.

The cooler itself consists of a 90mm fan which blows air onto the single, ‘sunflower’ style all aluminum heatsink. The heatsink contacts the GPU core directly, but the VRMs and memory are not contacted and therefore are not being directly cooled. This isn’t a huge deal, and I doubt a card of this power will get very warm.

For having having no external PCIe power, the ZOTAC GTX 1650 OC does overclock fairly well. We managed 100MHz offset on the core clock, bringing the total peak boost to ~1795MHz. Memory wise, we managed a 500MHz offset, which increases the effective memory clock to 9.0 Gbps.

Looking at the above chart, we can see that the GTX 1650 consumes 30% less power than the RX 570 at stock. Overclocking does increase power draw by 2%, but that’s not really saying much.

As expected, the GTX 1650 does outperform the RX 570 when it comes to temperatures as well. The NVIDIA card manages to run 22% cooler despite having a much less beefy cooling solution. Overclocked, the temperatures raises a bit, but nothing to write home about.

Starting with 3DMark Fire Strike, we see that the GTX 1650 trails the RX 570 4GB by quite a bit. In fact, the difference is as high as 48% when comparing the ‘Graphics’ score. Overclocking the ZOTAC card does increase performance, but only by 7%, which is not enough to close the gap.

At stock settings, the GTX 1650 loses by a whopping 22% versus the RX 570 in Far Cry. Overclocking the card does split that lead nearly in half to just 12%, but that’s still an easy win for the Radeon.

The Radeon card once again wins by wide margins, with a 19% lead over the GTX 1650 at stock. Once overclocked, the GTX 1650 does close the gap a bit, trailing by just 3% on average.

If that last game wasn’t bad enough, Resident Evil 2 shows us our biggest lead yet with a devastating 107% increase in performance for the Radeon card compared to the stock GTX 1650. Once again, overclocking does increase performance by 10%, but that’s not saying much here.

Moving on to Battlefield V, we see the GTX 1650 trails once again, with the RX 570 leading by up to 22% on average. Overclocking the GTX 1650 does narrow the lead to just 9% though, which isn’t quite so bad.

The Division 2 also sees the RX 570 smoke the GTX 1650 with an average lead of 27%. Overclocking the card increases performance by 5%, but it’s not enough to really catch up to the mighty RX 570.

It’s just not getting any better for the GTX 1650. At stock, the GTX 1650 trails the Radeon card by an outrageous 65% on average. Unfortunately, overclocking isn’t going to be helping narrow that gap, as our overclocked configuration had troubles running the game at all.

Our penultimate test, Wolfenstein II has the GTX 1650 trailing by 26% on average, with that narrowing to 16% once overclocked. I’m sure these results would be different with Turing’s VRS (Variable Rate Shading) enabled, but again, we test with that setting turned off.

Our final test in this report, World War Z sees the GTX 1650 losing by another beefy margin of 37%. Overclocking the GTX 1650 does increase performance by 7% on average, but again, it’s not enough to catch up to the RX 570 in this title.

Well, after a 11 games and a couple of synthetic benchmarks, I think we have a fairly decent picture of how the ZOTAC GTX 1650 OC performs, for the most part. That said, many of you are probably interested in seeing a summary of the performance delta between the GTX 1650 and the RX 570 4GB, so here it is:

Update: correct some errors in the chart above.

Looking at the chart, we can see that the GTX 1650 failed to win in any of the 11 games we tested in this report, and overall delivers performance that is 26% worse than its competitor at 1080p. That’s a fairly wide gap for two cards that are meant to compete with each other, and it’s even worse when you consider that the GTX 1650 is actually more expensive. At $149 for the GTX 1650, it is on average $20 more than an RX 570 4GB similar to the one we tested in this report. You can also fetch a model with 8GB of VRAM for just $10 more than the GTX 1650.

If I’m honest, I don’t really think the ZOTAC GTX 1650 OC (or the GTX 1650 itself) is a bad card. I like the fact that it offers 1080p gaming performance without the need for any external power, and its small size makes for a good option for small-form factor systems. That said, pricing is really an issue. If this card was priced at $99 or even $119, I’d call it a good alternative to the RX 570, especially for users wanting something that uses less power and runs cooler. But, at $149 and up for more premium models, I can’t really recommend the GTX 1650 for anyone at all.