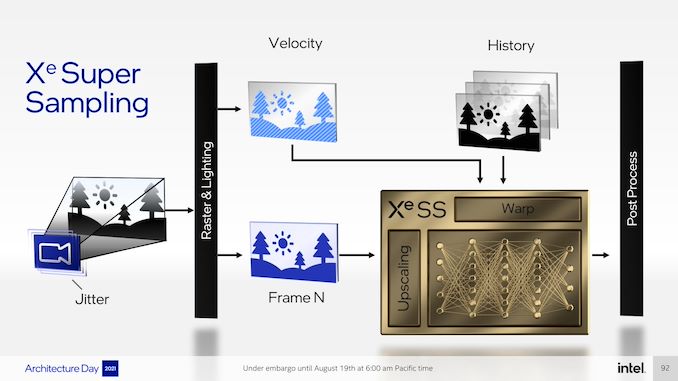 Some speculated that this technology was assisted by the creator of DLSS Anton Kaplanyan – as he was recently hired by Intel. However, Anton confirmed on Twitter that he had nothing to do with the creation of XeSS – this sort of project takes a lot of time.

As many of you may know, both DLSS and FSR have weaknesses to their approaches. Nvidia’s solution is prone to ghosting artifacts (although this is said to be reduced in the newest DLSS available when configured properly) and other issues such as those shown in the videos below:

Intel’s Lisa Pearce mentioned issues involved with competing solutions, specifically ghosting or blurring – when she announced XeSS -though she declined to name DLSS or FSR by name.

To show off Xe in action, Intel demoed at XeSS 4k vs native 4k demo which you can watch below:

XeSS, like Radeon’s FSR, will be fully open source and will run on any GPU that has the necessary hardware. However, that does not necessarily mean it will run on any GPU. Intel has only confirmed that Xe will use XMX on Intel dGPUs and DP4a on other GPUs. Only Xe-based iGPUs, including Rocketlake’s iGPU, have been confirmed to support XeSS – you might not be able to run this on a 9th or 10th generation iGPU unfortunately.

What does this mean for gamers? Well, /u/stblr on the /r/Intel subreddit created a list of GPUs from Intel, Nvidia, Radeon, and even ARM that support the necessary instructions to run XeSS

This means the R9 290 would not support XeSS, but the Radeon VII would. Anton Kaplanyan did allude to possible console support on Twitter.

For Nvidia users, any 10 series or newer GPU should be XeSS compatible.

Another question is that of performance differences between Intel hardware and non-Intel hardware. Early figures show that XeSS will fall behind FSR & DLSS performance by 10-15% in framerate, but Intel claims it will deliver higher quality while doing so. We’ve heard rumblings from multiple trusted sources that Intel’s performance could be improved, especially on Intel dGPUs, once further optimized.

Intel has said that further information about XeSS will be available later this week, but don’t expect a playable XeSS demo any time soon. That will probably have to wait until they launch their first high end dGPU, Alchemist.