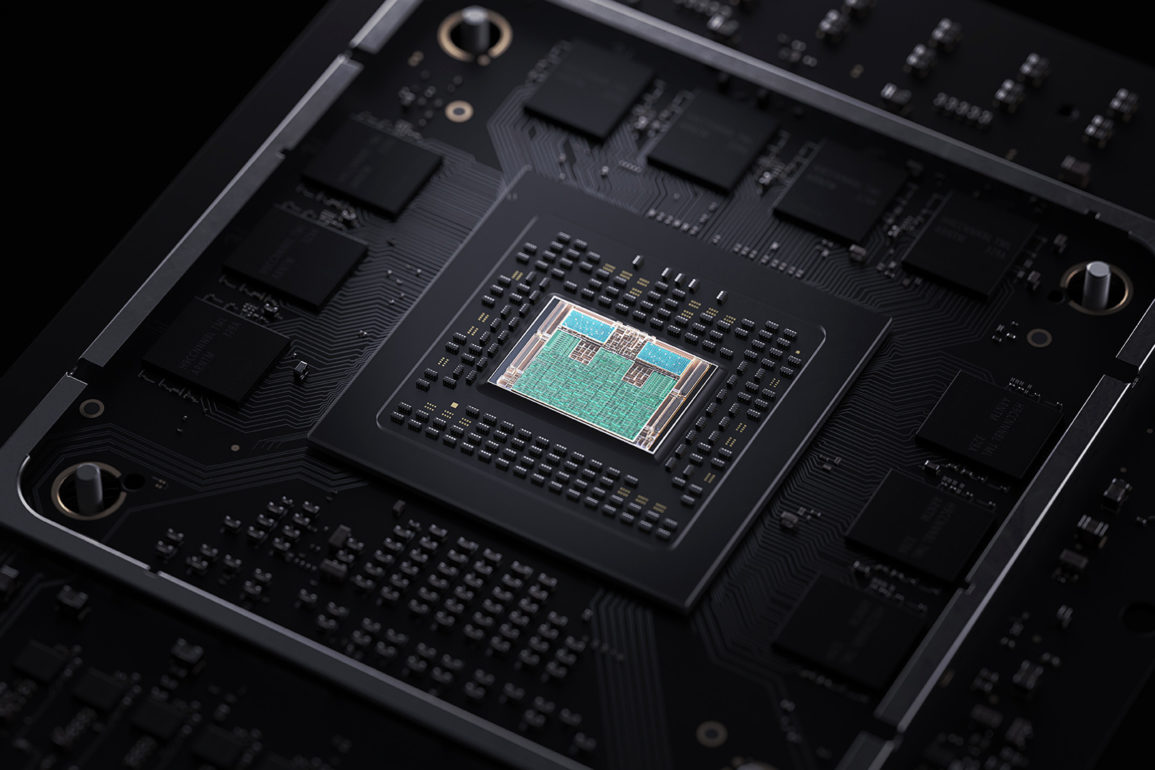 Now that NVIDIA has finally dropped the specifications for their upcoming RTX 30 series graphics cards, we finally have an idea of what their Ampere graphics architecture brings in terms of performance improvements compared to previous-generation Turing.

Of course, the next question is: Can AMD compete with this? Well, unfortunately, we don’t have a lot to go on as AMD has been rather quiet about their upcoming Radeon RX 6000 series graphics cards. That being said, we do know what the specifications for the next-generation consoles which will be powered by AMD’s RDNA 2 look like as both Microsoft and Sony have been very forthcoming ahead of their respective launches later this year.

First taking a look at the specifications for the RTX 30 series, we can see that there’s been quite the improvement on paper, compared to the RTX 20 series as every graphics card announced so far outperforms the previous world’s fastest gaming graphics card, NVIDIA’s own RTX 2080 Ti. That said, we’ll have to wait for independent reviews to drop in the coming weeks in order to know for sure, but the early look by the folks over at EuroGamer suggest an average of about 80% increase in performance between the RTX 3080 and the previous-generation RTX 2080. That said, it is worth noting that these numbers are across a limited number of titles, which have all been hand picked by NVIDIA. Still, we have no reason to question the ethics or work of our colleagues over there, so for now, we’ll take their numbers at face value for the purposes of this report.

If the RTX 3080 is indeed on average 80% faster than the RTX 2080, then based on the latest review of the RX 5700 XT from TechPowerUP, using the 4K performance summary results, it would make it roughly twice as fast as AMD’s current flagship, the RX 5700 XT; which is a 40CU part based on the RDNA architecture. So, that gives us a goalpost for AMD: twice as fast.

Taking a look at the above chart; we can see that the two consoles are very similar, although the Xbox seems to have the more powerful GPU, they can both tell us more about the RDNA 2 architecture. Starting with the Series X, its 52CUs and 12 TFLOPs of theoretical compute can confirm a few details about the core design of AMD’s latest architecture. How? Well, traditionally, a GPU’s theoretical compute performance is measured by multiplying the number of Stream Processors (NVIDIA calls these CUDA Cores) by 2x the maximum core frequency. If we follow this simple formula we can find that just like RDNA and GCN before it, AMD is packing 64 SPs per CU for a maximum of 3,328 SPs for the Series X GPU.

As for the PS5, its 36CU GPU is similar in specs to the RX 5700 series, but at significantly higher clocks. Whereas the RX 5700 XT tops out at 1905 MHz, the PS5’s GPU is capable of up to 2.23GHz. Given the size and power constraints of a console, this does bode very well for the potential clock speed uplifts we could see on desktop graphics cards, as we’d expect Sony would want to stick closer to the ‘sweet spot’ in terms of clock speeds and power consumption. For now, we’ll assume ~2.2GHz is the maximum we’ll see on on a desktop based RX 6000 series graphics card.

So far, we’ve nailed down that RDNA 2 will in fact be evolutionary rather than revolutionary in terms of design compared to RDNA, which is to be expected. But, we’ve also learned that Navi 2X should see significantly higher clock speeds than Navi, approaching 2.3GHz. This is significantly higher than NVIDIA’s peak clock speed for Ampere, which currently is 1.73GHz for the RTX 3070, with the larger RTX 3090 and 3090 GPUs dropping to 1.71GHz and 1.7GHz, respectively. That said, Ampere has significantly more Stream Processors than either of the next-gen consoles, with NVIDIA touting 5888 for the smallest GPU of the bunch. This is of course, where the bulk of the performance improvements come from compared to RTX 20 series, as clock speeds have not improved.

The Trouble with Ampere

That brings us to one of the biggest apparent problems with Ampere. As Jim recently noted in his video analysis of of the Ampere reveal, the theoretical compute performance increases from Ampere that are driven by these massive increases in CUDA cores, does not actually translate 1:1 in increased gaming performance. The RTX 3080 has nearly 3x the number of CUDA cores as the RTX 2080, which provides up to 3x the shader-TFLOPs, and yet by the best numbers we’ve seen, it is only 80% faster on average. In other words, this 30-TFLOPs Ampere GPU performs more akin to a theoretical ~18-20 TFLOPs Turing GPU. While I can’t say for sure why this is, it does seem like Ampere may be suffering from the same issue that has plagued AMD GPUs for years, until the release of Navi, and that is that the GPU’s maximum compute potential is not being fully realized in games. Not even close.

AMD has recently started referring to what we’ve known as ‘Big Navi’ as Navi 2X. But why? It is possible that the ‘X’ is just placeholder for the second digit in a series, meaning there will be multiple Navi 2 GPUs likely named Navi 20, Navi 22, Navi 24, etc. However, I’ve never seen AMD refer to previous GPU codenames in this way before. So, I think its odd that they’d start now. So, what if the name is literal, and Navi 2X is exactly 2X the number of CUs as the current Navi 10? That would mean the largest Navi 2X GPU would come in at 80 CUs (2x the 40 CUs of the 5700 XT’s GPU). If so, that would bring with it 5,120 SPs.

So, what kind of performance could we expect from something that big from AMD? Well, if the next-gen consoles’ clock speeds are anything to go by (1.8-2.23GHz), then the theoretical shader-TFLOPs of Navi 2X is likely somewhere between 18 and 23 TFLOPs, which is right where what AMD would need to compete with, and more importantly, potentially beat out the RTX 3080. As for the RTX 3090, well, it would likely get close at these numbers, but I believe AMD will likely target prices below $1,000, so it wouldn’t really be relevant to compare against directly.

But, what about the more affordable RTX 3070?, well, we don’t know as much about how that card performs, but taking NVIDIA at their word, it should be slightly faster than the RTX 2080 Ti, meaning its 20.4 TFLOPs is more like ~15 TFLOPs. At that rate, AMD could offer a cut-down variant of its Navi 2X GPU, a 60 CU variant would offer 3,840 SPs, and between 14 and 17 TFLOPs, again, using the console’s clock speeds as a template.

RDNA 2: 50% Boost in Performance Per Watt

Of course, now you’re asking: but won’t these cards be incredibly power hungry? We can extrapolate the peak power consumption based on the RX 5700 XT’s power draw. Going back once again to the review from TechPowerUP mentioned earlier, we can see that the RX 5700 XT consumes between 227-241 watts (depending on the model) during peak gaming loads. So, a card with twice the number of CUs should consume twice the power, right? Well, this is where that 50% performance per watt improvement that AMD touted back in March comes into play. If we take AMD at their word, then theoretically, a graphics card based on the Navi 2X GPU should consume ~300W at most.

So, by using all of the public information we have about both NVIDIA’s RTX 30 series, and AMD’s RDNA 2 architecture, we’ve been able to determine that yes, AMD’s upcoming Navi 2/Big Navi graphics cards can compete with NVIDIA’s latest offerings. That being said, this report is not meant to build hype for the RX 6000 series. We’re simply speculating the best case scenario based on what we know, and obviously, this should be taken with a heavy dose of salt. While AMD does in fact have a lot of potential with RDNA 2, we’ve seen the Radeon Technologies Group fumble hard in the past, and there’s no telling if they’ll be able to execute this time around. Remember, we have an entire line of merch dedicated to the constant disappointment enthusiasts have endured over the years in waiting for Radeon’s next big thing.

With that said, if there was ever a time for AMD to turn things around and start to actually compete with NVDIA at the enthusiast class, I personally believe that time is now and for the sake of competition in the graphics card market I remain optimistic about Navi 2X’s potential. But, I’m not suggesting you follow my lead down this road.