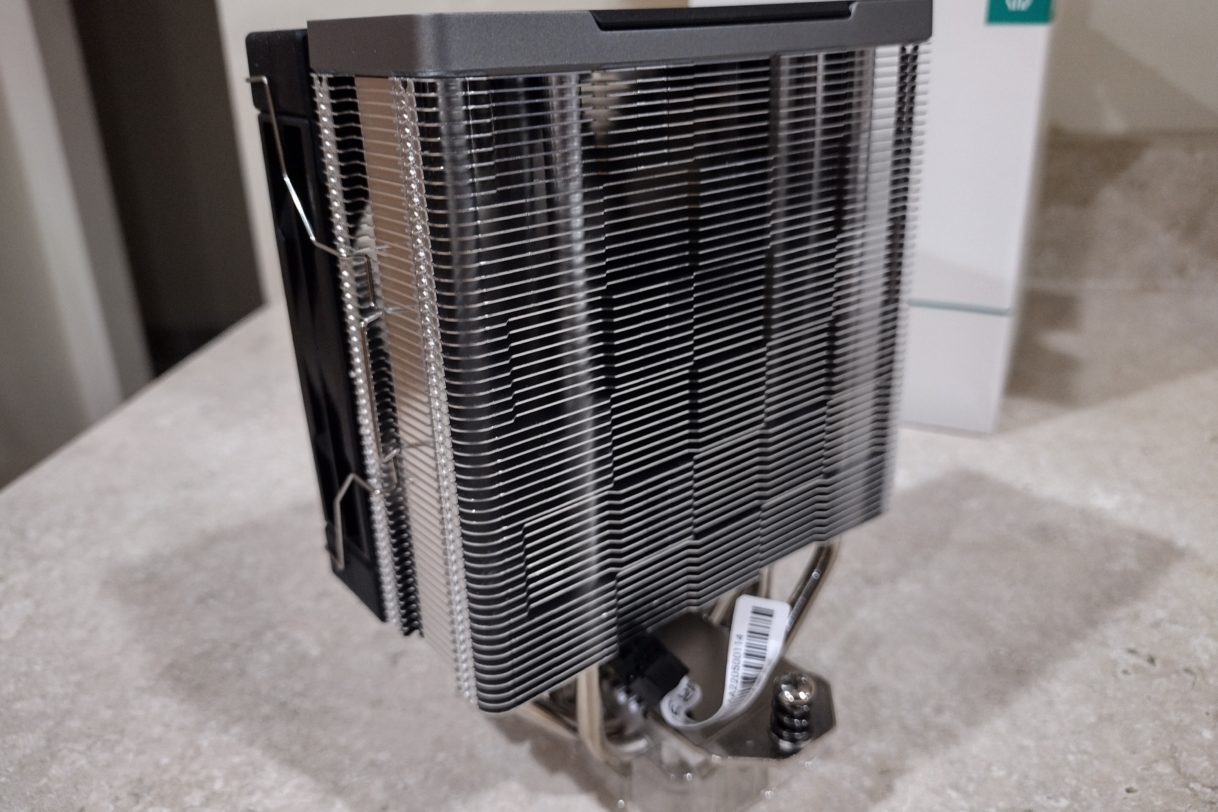 Today we’ll be looking at DeepCool’s new budget CPU cooler, the AK400. It is a single tower version of DeepCool’s previously released AK620, which I previously reviewed here and consider to be the best air cooler currently on the market.

With previous cooler reviews, I’ve used Intel’s i9-12900k as it is the hardest to cool consumer CPU on the market right now. For this review I’ve opted to use the i5-12600k instead, as it’s a more appropriate pairing – most folks aren’t going to use $35 coolers on a 12900k.

The AK400 comes in a small sized box, with foam at the top and bottom for protection and to secure the heatsink during shipping. Parts included with the AK400 are:

The heatsink includes 4 copper heatpipes which directly contact the CPU. DeepCool’s pre-applied thermal paste is evenly applied across the heatpipes and should provide ideal contact across any CPU.

The AK400’s radiator is designed differently from others, having square-shaped recesses on both sides. Below is a video showing a 360 view of DeepCool’s AK400

There’s more to a cooler than just it’s heat sink. The fans included have a huge impact on cooling performance and noise levels. The included DeepCool fan is extremely quiet in most loads.

I wanted to test DeepCool’s AK400 a little differently than other reviewers would. DeepCool includes an extra clip for a 2nd fan – so I tested it with 2 fans instead of one.

While DeepCool rates the AK400 as being capable of cooling up to 220w, this testing was done with a i9-10900k CPU. As I’ve mentioned in previous reviews, it’s a lot harder to cool higher wattage loads on Alder Lake due to the increased density of the Intel 7 manufacturing process.

For testing overclocking stability, I prefer to use OCCT’s small set stress test. This is a torture test, and results do not reflect real life performance. I settled on a 4.9ghz overclock at 1.28v, as this was the fastest the i5-12600k could sustain in OCCT’s small set stability test while remaining under TJMax when testing with MSI’s CoreLiquid S280.

Neither of the air coolers tested was capable of keeping the overclocked CPU under TJMax while running OCCT – this is to be expected, as it takes serious cooling to handle this load. At stock settings, however, the AK400 was able to pass this test while consuming 169w. Based on these results I would say the AK400 can handle up to 175w safely on an Alder Lake CPU.

DeepCool’s AK400 brings a new level of performance and value to the Air Cooler market, and is capable of handling most Alder Lake CPUs at stock settings with no sweat – and can overclock some of them too!

In my testing, the AK400 was able to handle up to 170w comfortably when paired with an Alder Lake CPU. When paired with an additional fan, it provided performance shockingly close to Noctua’s NH-U12A in most scenarios.

I’m giving DeepCool’s AK400 our Gold Award because you can’t beat this level of performance for 35 bucks.