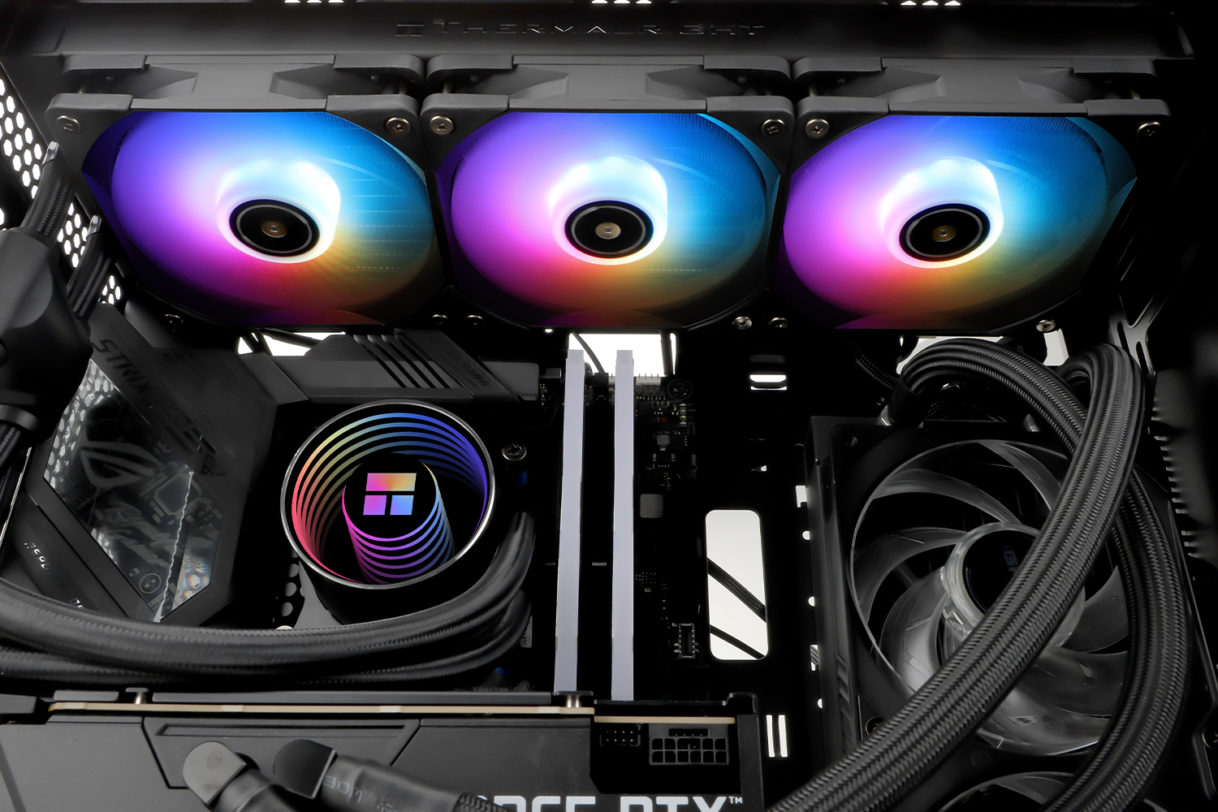 Thermalright is an established player in the cooling market, with unique products like its all copper SP94 CPU Cooler in the past and more recently the LGA1700 Contact frame which prevents and corrects bending on Intel Alder Lake & Raptor Lake based systems

Today we’ll be looking at Thermalright’s Frozen Notte 360 White aRGB, a 360mm AIO with a high speed external pump designed to tackle the hottest of workloads. In the past I reviewed their Peerless Assassin 120 SE and found it to be amongst the best coolers for Alder Lake, will the Frozen Notte stand up to the challenge of Raptor Lake’s i9-13900K? We’ll have to look at the results to be certain, but first let’s take a look at the features of this cooler.

Thermalright’s Frozen Notte 360 aRGB comes in long length box, with molded cardboard, foam, and plastic for the protection of the inner contents.

And here’s a view of all of the included components

What’s unique about this unit?

The CPU block has an infinity mirror with aRGB lighting, giving an accented flare to it’s appearance.

There’s more to a cooler than just it’s heat sink. The fans included have a huge impact on cooling performance and noise levels. Included with the Frozen Notte are 3x TL-E12B-S 120mm fans.

While most AIOs on the market are based on Asetek designs, Frozen Notte uses a high speed external pump capable of sustaining speeds up to 5300 RPM (+-10%). The whine of the pump is a bit annoying at high speeds, as such I recommend limiting it’s speed for normal operation as it will run fairly silent at lower speeds.

The radiator included with PL360 Flux isn’t the thinnest or thickest radiator we’ve tested, and it should be compatible with most cases on the market.

I’ve changed the way I’ll be testing coolers on this site to match how I’m also testing coolers on Tom’s Hardware. This will allow you to compare the results I’m showing here to 12 other coolers I’ve tested, despite that data not being shown here. My latest review on Tom’s Hardware of Arctic’s Liquid Freezer II 360 is available at this link I’ll include of course include comparison data from the tests I previously posted on this website or on my personal website, Boring Text Reviews.

With power limits removed, Intel’s i9-13900K can consume over 350W in this scenario and is extremely difficult to cool. Every cooler I’ve tested thus far has throttled to some extent in this scenario. Because of this, we’ll be judging the results in this by two measures : total watts cooled, and loudness of the fans.

200W is still fairly demanding, but much easier to cool. In theory, this should also be comparable to Ryzen 7000 CPUs when pushed to their maximum power consumption. The vast majority of coolers should be able to keep the CPU under TJMax with a 200W power limit, so we’ll be judging this scenario with a typical delta over ambient thermal measurement as well as the loudness of the fans.

125W is very easy to cool. While we will look at thermal performance by measuring the delta over ambient temperature, noise levels are more important at this low power limit.

In terms of total potential cooling performance Thermalright’s Frozen Notte 360 does very well – essentially tied with Cooler Master’s PL360 Flux for the 2nd strongest result of all cooler I’ve tested thus far, including those on Tom’s Hardware. Please check out my recently published review of Arctic’s Liquid Freezer II 360 aRGB on Tom’s Hardware for more comparative data – I have the results of 13 coolers shown there, in addition to the results shown here.

If you’re wondering why the chart above starts at 36, it’s because that is the reading my noise meter records when my computer is turned off. This makes it the floor for the noise level results included in my tests. Keep in mind that dBA results are logarithmic, meaning that differences in loudness will be larger than what my charts might suggest.

While the Frozen Notte does very well in terms of total cooling potential, it achieves this at the cost of noise. There’s no way to sugar coat this – this is the LOUDEST cooler I have tested with fans and the liquid pump running at full speed.

When restricted to 200W, the Frozen Notte 360 kept the CPU at 50c over the ambient room temperature (75c actual temperature). This is a better thermal result than you’ll see from any air cooler, and in line with most 360mm liquid coolers on the market.

Unlike the previous thermally unrestricted results, the Frozen Notte 360 can cool this workload without running obscenely loud. At only 49.2 dBA total system noise levels, it’s not what I would consider quiet – but it’s not annoying loud either. However, I should note that I have reduced the pump’s speeds in this scenario to 60%, at higher speeds it is louder.

Finally, we’re looking at 125W. In this scenario, I consider noise levels more important than thermal performance. 125W is the lowest TDP level I test at because anything less would not be a challenge to cool at all – and many coolers run whisper silent at this setting.

With a total system noise level of 42.9 dBA, the Frozen Notte 360 isn’t quite what I would consider “silent”, but it doesn’t run loud in any sense of the word at all. As with my 200W results, I have limited the pump’s speeds manually to 60% in this scenario.

Looking at the thermal performance here, a 32c delta over ambient is amongst the best results I’ve seen in this TDP restricted scenario.

Thermalright’s Frozen Notte 360 aRGB lives up to the challenge of taming Intel’s most difficult CPU to cool – handling up to 309W in our most demanding test with the Raptor Lake i9-13900K. However, it achieves this at the cost of noise – it’s the loudest cooler we’ve tested in this scenario.

When workloads are restricted to 200W or less it’s noise levels are more reasonable, and when TDP is reduced to 125W or less it runs fairly quietly. At $145.99 (price at NewEgg as of this writing), it’s price is similar to many other 360mm AIO coolers on the market. It’s a strong performing product that pairs well with Intel’s i9-13900K – or any other CPU for that matter.