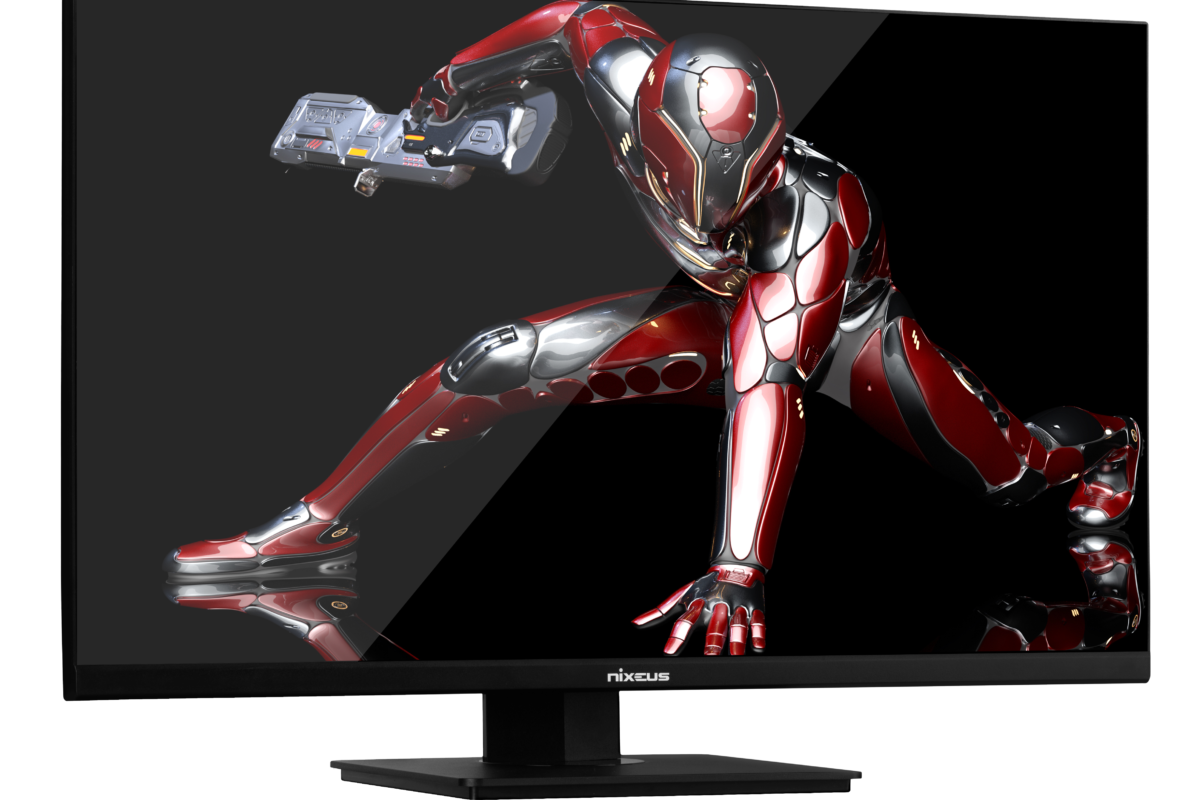 Today we’re looking at the EDG27x, Nixeus’s latest high refresh rate 1440p gaming monitor, which has been redesigned with a 165hz Fast IPS KSF panel and works with both Xbox Series X (including VRR) and PlayStation 5 consoles at 120hz.

The monitor arrives in a standard brown box, with molded styrofoam for protection.

The installation of the NX-EDG27X is simple, requiring no tools whatsoever. Setting it up is a simple matter of slipping the neck of the monitor stand onto the stand. As with all Nixeus monitors, the EDG27X is VESA compatible if you prefer to use 3rd party Monitor Stands or Arms.

The last Nixeus product I used was the the EDG34, and I wasn’t thrilled with the included stand as it offered no height adjustment and only minor tilting adjustments. The EDG27X’s stand rectifies this – offering height adjustment, a wide tilting range, and swiveling. The stand also supports using the monitor in portrait mode, as shown below.

The OSD input is from 5 buttons on the back of the unit, pictured below.

The GUI of the on screen display has been updated from previous models, but offers all of the same settings that you would expect. The biggest upgrade in the OSD is the ability to fine tune response time overdrive setting, with the option to set overdrive control in a range of 0-100, rather than the typical fast/normal/low/off.

The EDG27x has very little trailing in all of the games I tested it in. Above shows the results from BlurBuster’s UFO Test. I don’t know if it actually hits the rated 1ms response times – you’ll have to wait for Hardware Unboxed or TFT Central for those test results – but Chief Blur Busters remarked that “Blur-wise, this is good for a modern 165Hz IPS”

While the EDG27x did have some minor glow on the four corners, overall I would consider this a good result.

Colors are vivid thanks to the IPS panel being used. The “out of the box” settings were acceptable, but it had a slight blue shift that I only noticed after calibrating the unit using an i1 Display Pro Plus.

Color and lighting uniformity wasn’t ideal, but it wasn’t quite bad either.

Viewing angles were great on the EDG27x, with no perceptible color shifting.

Variable Refresh worked perfectly using Radeon, Nvidia, and Intel Graphics in gaming. It a variable refresh window of 30-165hz using DisplayPort. No brightness flickering was observed on this monitor while using FreeSync/Adaptive Sync in any scenario that I tested – that’s not to say it doesn’t exist, but merely that I wasn’t able to find any scenarios where it occurred.

This is a great monitor for PC enthusiasts looking for a good 1440p experience, and it also works with both the PlayStation 5 and the Xbox Series X. I’ve heard about how well Fast IPS monitors performed, but it’s not something you really comprehend until you try it in person. I’ve been using VA monitors for quite some time now, and while recent models are much better than the VA monitors of the past – I was still blown away by how much crisper the response times were on the EDG27x.

There are many options for Fast IPS 1440p 165hz monitors in the $399-$499 USD price range, and this monitor will likely be very similar in performance to competing models. If I were to recommend this unit over the alternatives, it would be for Nixeus’ top notch customer support. In contrast to other companies, whose customer “support” teams are painful to deal with, Nixeus’ Service Team is easy to work with and will take care of any issues you have rather quickly.