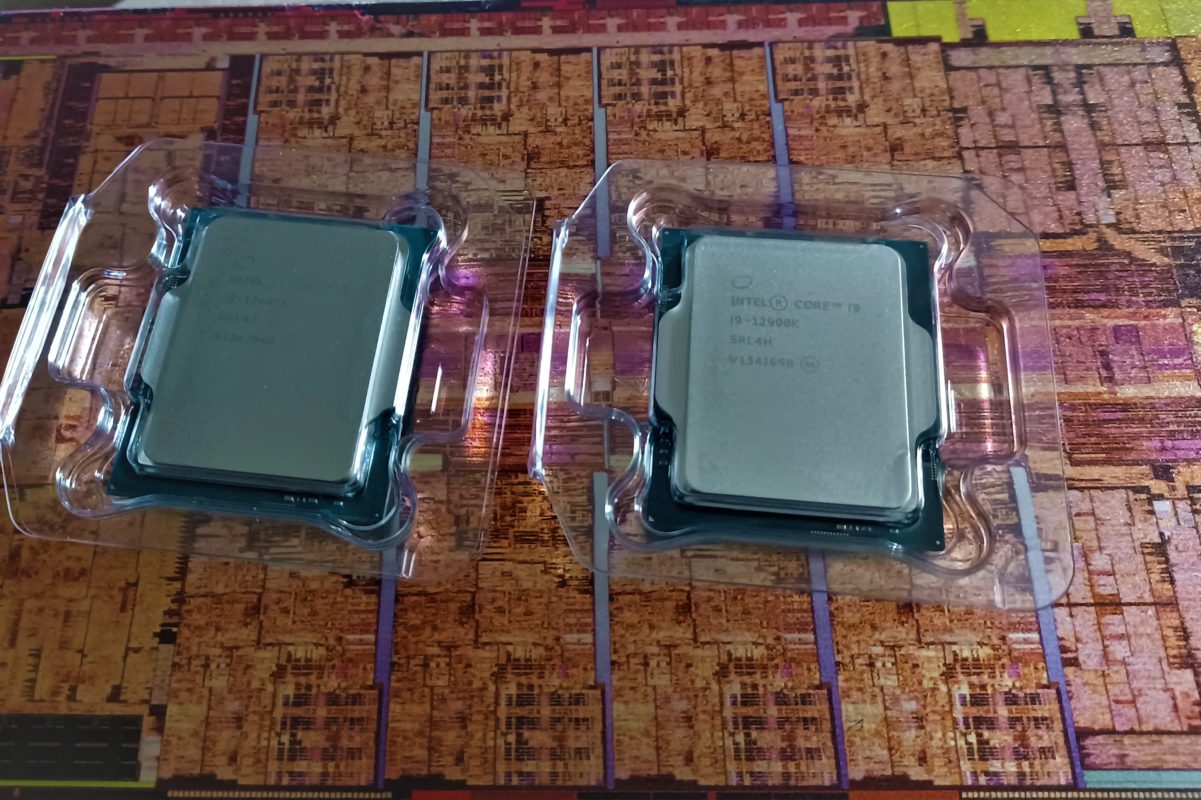 Today I’ll be looking at Intel’s newest 12th generation “Alder Lake” CPUs, the first desktop CPUs created with the 10nm Intel 7 manufacturing process. Intel provided samples of the i5-12600k and i9-12900k CPUs for this review, and I’ll be comparing them to Intel’s previous performance king – the i9-10900k.

I’ll also include a few comparisons with the i9-11900kb (Tigerlake) found in Beast Canyon, and the infamous “waste of sand” known as the i9-11900k which I tested earlier this year and was unimpressed with it’s performance compared to the prior i9-10900k. Thankfully, Intel didn’t repeat another blunder with Alder Lake – the $619.99 i9-12900k provides incredible uplifts in both gaming and productivity, while the $299.99 i5-12600k is the star of the show providing better overall performance than Intel’s i9-10900k and uses significantly less power to do so.

While the 12th generation CPUs are capable of DDR5 support, for this review we’ll be testing with only DDR4. Once DDR5 is actually available, we’ll publish another review showing the differences between DDR4 & DDR5 performance on Alder Lake.

We’ll be testing in a variety of different ways, and I hope that will make this review unique in comparison to other reviews you may have seen. Today’s benchmarks include scaling tests for cache, power levels, and IPC, as well as truly CPU bound gaming benchmarks and higher resolution testing scenarios as well.

In order to keep the quality of motherboards similar, I used MSI’s mid-range “A Pro” motherboards for both 10th & 12th generation CPUs and used the same DDR4, SSDs, Coolers, and case.

With 12th generation motherboards, Intel has effectively eliminated PL1 limits on unlocked CPUs. While this might have made sense in the past, with Alder Lake this was – in my opinion – a stupid decision because in most scenarios very little performance is gained from setting power consumption limits above 140w.

The biggest gap in “Real Life” performance I found was in RealBench’s Heavy Multitasking benchmark, in which limiting CPU power consumption reduced performance by ~20%.

The i5’s reduced power consumption is stellar, especially considering that it’s gaming performance is on par with the i9-10900k – which used 55% more power. The 12900k shows some improvements in energy efficiency, but those gains are limited by the higher clocks of its P cores.

We’ve all know that the i9-10900k runs hot, and the i9-12900k continues that tradition, but the i5-12600k sips on energy and is easily cooled. The most power I was able to get the i5 to consume, with power limits removed, was 128w during Cinebench. Believe it or not, however, the i9-12900k is actually the most power efficient CPU Intel has ever released due to binning.

What does it take to cool the Alder Lake i9? For cooling results, I tested the i9-12900k with BeQuiet’s Pure Loop 280 liquid CPU cooler, DeepCool’s AK620, and BeQuiet’s Shadow Rock Slim 2. The i9 is both easier and harder to cool than previous generation CPUs. Scenarios such as gaming were easier to cool, but more intensive loads can be harder to cool due to the increased density of the 10nm Intel 7 manufacturing process. For example, a 200w load in Cinebench runs up to 15c hotter on the i9-12900k (vs the i9-10900k).

You’ll notice a complete lack of thermal comparison results for the i5-12600k. That’s because it doesn’t run hot enough – in gaming it consumes around 60w of power, and in Cinebench it doesn’t pull more than 130w even with power limits fully removed. Any half-decent air cooler will be plenty strong enough for every load you can possibly throw at the i5-12600k.

The 200w testing results here are just shy of TJMax. Considering that both of these coolers are fairly high end, I wouldn’t recommend trying to pair weaker coolers with the i9 if you’ll be running loads like Cinebench without power limits, or you’ll find the CPU thermally throttling.

To test IPC between these 3 architectures, I ran each architecture with 8 cores running at 3.3ghz (for Alderlake, the efficiency cores were disabled).

How about those efficiency cores,eh?

There’s been a lot of talk about the e-cores, and folks have wondered if it was a smart idea to include them.

In non-gaming workloads, the efficiency cores boost performance significantly – especially within the same power budget. In Cinebench, the i9-12900k scores 38% higher with the e-cores enabled.

The P-cores benefit very little in Cinebench from the additional power budget that comes with disabling the E-Cores, only adding ~30mhz to the clockspeed of the performance cores.

In RealBench’s Heavy Multitasking benchmark, performance is increased by 46% when utilizing the efficiency cores.

Other tasks, such as image editing, seem to benefit less from the efficiency cores.

The increase in single threaded performance between Cometlake and Alderlake is absolutely astounding here – we’re looking at an increase of 56% between the scores of the i9 CPUs.

Memory Mark’s results were curious, because in this test the i9-10900k had the best overall performance. However, the lesser memory performance didn’t impact real world results for Alder Lake.

OpenCL performance was rather curious, as this is one of the few tasks the 10th generation CPU takes the lead – and in this test, the i5-12600k barely outperformed the i9-12900k.

The following gaming benchmarks are not meant to compare real life performance, but the theoretical maximum performance. Most of the benchmarks will be with the various CPUs paired with a RTX 2070 at 720p, but I have also included 720p, 1080p, and 1440p benchmarks with a RTX 3070

Keeping in mind that the gaming benchmarks above are theoretical, and that the differences between CPUs will be smaller in scenarios limited by the GPU, we can see that the i9-12900k can provide 30%+ higher gaming performance than the i9-10900k in CPU-bound scenarios.

While running intensive workloads the i9 can run hot, as such I highly recommend either liquid cooling or high end air cooling if you’re running default power limits – but realistically I don’t see the point in running the i9 past 140w, there are very little gains from increased power consumption. If all you’re doing is gaming, you can cut gaming power consumption nearly in half with just a few tweaks – while either losing very few or gaining a few frames.

The i5-12600k is the real star of the Alder Lake line up. It generally provides the performance of the i9-10900k at a fraction of the price and power consumption. There are a few scenarios where it lags behind the 10900k, but those are balanced with scenarios that the i5 leaps ahead of it.

Alder Lake is finally a CPU worth upgrading from for owners of 8th-10th generation Intel CPUs, assuming you have a strong GPU. Amazingly, Intel even priced this generation’s CPUs cheaper than the competition’s equivalent products – something that I don’t recall Intel doing before, ever. I can’t wait to see what AMD brings to the table with Zen 3 + V-cache & Zen 4 – it’s nice to have real competition back in the desktop CPU market.