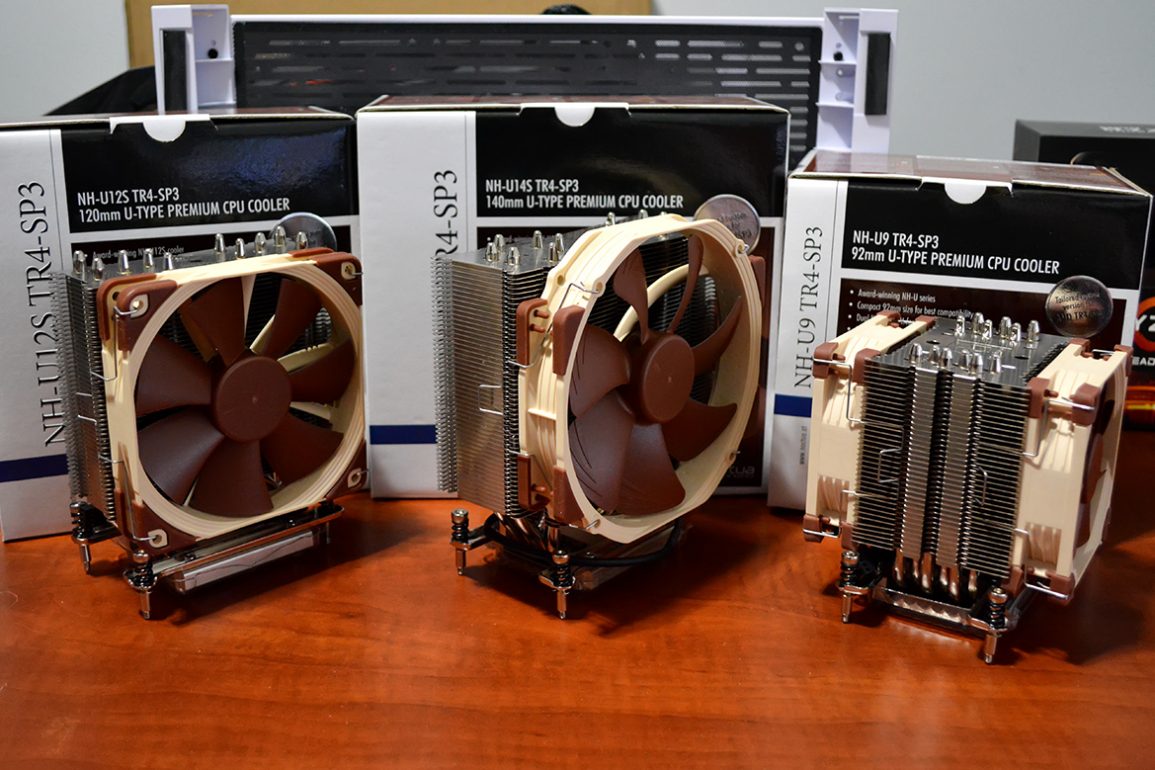 We’ve been running a series, covering AMD’s new Threadripper 3000-series CPUs, particularly our sample of the Threadripper 3960X. We’ve tested general performance and gaming, reviewed the Gigabyte TRX40 AORUS XTREME, and even virtualization, scaling, and efficiency. Through all of this, we wanted to do at least one more major article analyzing the cooling needs of Threadripper. Fortunately, Noctua sent us a trio of their NH-U series, TR4-SP3-tailored coolers to test with, so a big thanks to them for making this possible! Will Big Air have what it takes to keep Threadripper cool? We’ll find out!

The Coolers, A Comparison

Officially, on Noctua’s website, only the NH-U14S TR4-SP3 is listed as compatible with our 3rd-gen Threadripper, and that’s “without turbo/overclocking headroom.” Both the NH-U12S and NH-U9 TR4-SP3 coolers are listed as “not compatible,” suggesting they don’t have the thermal dissipation capability to handle our 3960X. However, they are listed as “under evaluation,” so the jury is still out. Through the course of our review, we now have the data to present so we can judge for ourselves just how effective they are. In the table above, we listed estimated TDP numbers based on Noctua’s CPU Compatibility List for each cooler and the amount of turbo/overclocking headroom they estimate each cooler has for various Threadripper SKUs, so you have a general sense of comparison.

We’re using the same setup as our initial Threadripper review, except we’ve swapped out the AORUS GTX 1080 Ti with a Gigabyte AORUS Radeon RX 570 4GB, which we use for non-gaming test scenarios. The other thing to note is the Lian Li case has no fans at stock, so we left the side off, making this more like an open-air test bench than I would like. As we’ll see, leaving the side panel off was also a necessity due to heat sink clearance concerns.

We did our noise testing with a BAFX3370 at a distance of 28″ (see image below), which we feel is representative of a common minimum sitting distance for computer use. If your tower is further away, the noise will be somewhat quieter, but this should be a fair starting value to get a general idea of how much noise to expect. Unfortunately, we were only able to get a 39.9 dBA baseline in our testing area, as we don’t have a sound studio to test in, so we can’t validate the absolute lows claimed, but anything above 40 dBA is certainly of more interest anyway.

We measured the ambient air and exhaust air with the temperature leads featured on our TRX40 AORUS XTREME motherboard, with placements as shown above. The ambient temperature ranged between 20°C to 21°C depending on the time of testing, and was accounted for in our Delta T Above Ambient calculation for our results.

We also chose to expand upon just a stock heat sink setup, and added numbers for a second fan attached to the coolers that only come with a single fan configuration (the NH-U14S and NH-U12S), so you can see how they perform with the extra cooling.

We compare the air cooling performance to the NZXT Kraken X62 that was supplied by AMD along with our Threadripper 3960X. This can help us see how well the Noctua coolers do in contrast to AIO liquid cooling. Note that we did NOT have the NZXT CAM software installed during testing for utilization of custom or preset fan profiles for the liquid cooler. The reason for this is even the “silent” preset would ramp up to max fans under our load tests and cause a rather unbearable 51 dBA of noise while not providing much, if any, significant cooling advantage. However, without the software to manage fanspeed ramping, the NZXT remained at a good performance level and mild 41.6 dBA, even during our Prime95 testing, making it more ideal and representative of desired behavior. We had updated to the latest firmware and software versions, so this suggests the stock, unmanaged behavior for the AIO is to remain at a lower fan speed across the entire temperature curve, without having the mangement software to ramp it up to compensate in real-time for spiking CPU temperature. We could have made a custom, flat fan profile to simulate this same outcome, but just not installing the control software was effective enough.

This review will be split into multiple pages, one per cooler, and we’ll examine the combined results at the end. Be sure to at least read through the NH-U14S portion, as that’s where we’ll explain our tests and process in the greatest detail.