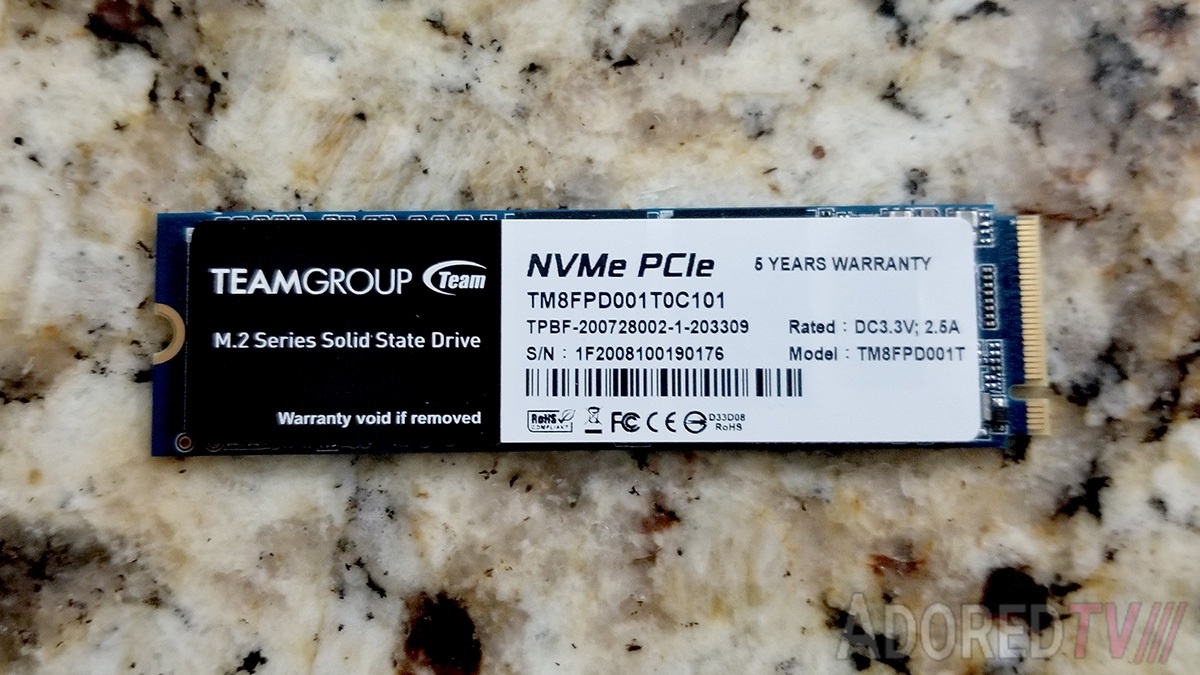 With the go-to NVMe SSD brands battling it out for top-performer, but not really competing on price, lower-cost alternatives are tempting to try to find a budget performer. Of course, one doesn’t expect the full performance seen at the top of benchmark charts at a budget price, but can performance be good enough to come close and also make the small cost premium over standard SATA SSDs worth it?

Specifications are pretty good as a brand. The 600TB written for our 1TB model falls right in line with Samsung’s EVO drives and the 2 million hours MTBF actually exceeds Samsung’s 1.5mil and Sabrent’s 1.8mil, not that losing a few decades off 228 years will make that much of a difference, but it does push the likelihood of premature drive death that much farther away. However, once you’ve determined your capacity requirements, the only specs that really matter with NVMe drives is PCIe3 vs PCIe4, performance, and price. Based on the spec sheet, the MP33 Pro looks to land well ahead of SATA SSDs, but looks like it will have some trouble keeping up with more-expensive models. At under $100 for 1TB, will it be fast enough to justify the cost savings?

The drive supports TRIM, has error-correcting (though which algorithm is unspecified), and wear-leveling. It also has an SLC caching feature to speed up write performance when dealing with bursty write workloads. TeamGroup mentions several times on their product page that their drive is “reliable.” Their MTBF and 5-year warranty suggests they have confidence in the drive, but without details of why the drive is more reliable than competitors, we have to leave this to marketing-speak.

What’s missing is drive cloning software. Other manufacturers like Western Digital, Samsung, and Sabrent all offer essentially a simple version of Acronis to clone your OS drive to the new SSD. TeamGroup does not for this drive. However, with free cloning software available, like Macrium Reflect or Clonezilla, the licensing savings can be passed on to consumers in a lower price.

Our Threadripper test setup has full PCIe 4.0 x4 lanes provided to three M.2 slots, two directly off the CPU and an additional off the chipset, allowing unrestricted throughput to either PCIe 3.0 or 4.0 drives, especially for SSD to SSD transfer testing.

We’d like to thank AMD for providing us with the Threadripper and MP600, Gigabyte for the TRX40 AORUS Xtreme, and Noctua for the NH-U14S TR4 that we’re using in our test bench. The remaining components were purchased personally, including the TeamGroup MP33 Pro 1TB we’re reviewing today.

We test AS-SSD with a 10GB size as opposed to the default smallest 1GB so we can bump against the DRAM or SLC caches of tested SSDs. You’ll notice our feeds and speeds tend to be lower, especially in random 4K, than other sites that may only test at 1GB. Ours will be more indicative of a heavier-utilized workload rather than light web browsing.

Sequential Read comes in at 2284.31MB/s, landing just over three-quarters the performance of our traditional top performers in the NVMe Gen3 space, but exceeding its own specifications by 184MB/s. The MP33 Pro’s weakest showing appears to be in single-threaded 4K random reads, bottoming out our chart, even below a SATA M.2 SSD. It rebounds in our 64-thread 4K test, easily doubling the SU800, but still falling well short of the SX8200 Pro and especially the WD SN750. The MP33 Pro’s slower 4K random read scores drop it rather low on the read score chart.

The MP33 Pro lands just below its rated spec, only pumping out 1620MB/s sequential write, demonstrating that there are differences between AS-SSD’s workload and CrystalDiskMark on which the spec was based. It places at three-fifths the write speed of our top Gen3 performers. Single-thread 4K writes pulls ahead of the Sabrent Rocket Q by a decent margin and just about ties with the old Samsung 950 Pro and the newer 970 EVO. The WD SN750 and ADATA SX8200 Pro end up in another heat though, ahead of all but the Corsair Force MP600. 64-thread random 4K writes shows the MP33 Pro pull ahead of the SX8200 Pro, but flags rather far behind the other NVMe drives. The old 950 Pro shows how far NVMe drives have come since the early days. The MP33 Pro’s relatively stronger showing in random 4K writes vs its reads that lands it a score that practically ties with the SX8200 Pro and even puts it ahead of the PCIe4-based Corsair Force MP600. It’s still near the bottom of our chart though, far below the offerings from Sabrent and Western Digital, and of course the greatly more-expensive PCIe 4.0 Sabrent Rocket.

TeamGroup states the MP33 Pro should hit 2100 MB/s sequential reads and 1700 MB/s sequential writes in CrystalDiskMark, and it certainly does just that. It pulls 2545.82 MB/s in sequential 1MB reads actually, 445 MB/s over spec. It puts it close behind the SX8200 Pro, but 900 MB/s behind the rest of the NVMe drives. The single- and multi-threaded reads still run near the bottom of the pack. Heavy threaded random reads do outperform the WD SN750 and SX8200 Pro, which is not the scenario that plays out with AS-SSD. This demonstrates the different workloads played out by each benchmark tool. Even the random 4K single-thread benchmark pulls just shy of 50 MB/s as opposed to AS-SSD’s 30 MB/s. The data burst size (8GB vs 10GB) might have something to do with it as the SLC cache may run out, and is worth watching for on the long file copy graph later.

Once again, the MP33 Pro exceeds spec, but this time by only 91 MB/s for sequential writes. It puts it almost 500 MB/s behind the elusive WD SN750 and nearly half the speed of the other NVMe drives in our line-up. The MP33 Pro shows some strength in random 4K writes once again, running neck and neck with several of our competing drives, and particularly pulls ahead in the heavy multi-threaded write test.

Hunting for the size of the “SLC cache” feature in a real-world write test, we copy an install of World of Warcraft Shadowlands and Classic, a total of 73.6GB of game files and addons, from the PCIe 4.0 Corsair Force MP600 to the TeamGroup MP33 Pro. The copy burns through the large data files directly to the SLC cache mechanism at ~1GB/s, fluctuates a bit and then steadies out around 427 MB/s once the SLC cache is exceeded. The tail end of our transfer is thousands of miniature files found in addons and cache files, grinding the transfer speed down to ~1.5MB/s.

Of course, temperatures will vary depending on your M.2 slot location and heatsinks used to help cool the NVMe drive. The Gigabyte TRX40 AORUS Xtreme has a beefy heatsink system, and does a great job at keeping the three M.2 drives currently in our test rig cool. The MP33 Pro idles at 25˚C, crests to 47˚C under sequential read/writes, and cools off to 38˚C under single-threaded 4K reads/writes, and hits 43˚C under the heavy 64-thread 4K read/writes.

Under realistic workloads, like our folder copy test, the MP33 Pro performs admirably and even settles down to a steady rate close to max SATA rate. The budget price for the MP33 Pro makes it an easy consideration over any similarly-sized SATA SSDs that are even close to the same price. It shows its weakness against drives normally priced $30 more, but that’s a 30% price premium for that extra performance. It makes the TeamGroup MP33 Pro a phenomenal option for NVMe storage when chart-topping performance isn’t required and reasonable speed at a great price is paramount. Combined with a great 5-year warranty and a 600TB writes lifespan, which works out to 0.32 DWPD (drive-writes per day), the drive makes a great offering in the budget tier.