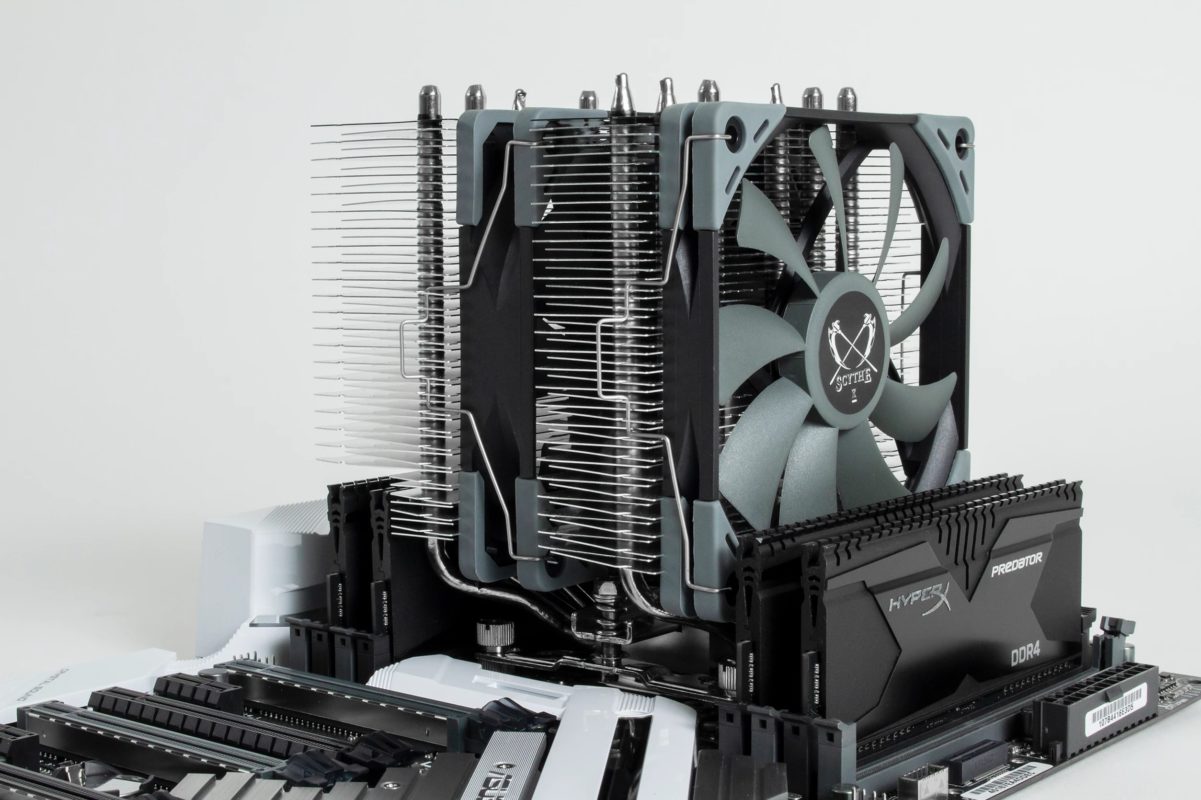 Today we’ll be looking at Scythe’s Fuma 2 CPU Cooler, a mid-range CPU Cooler that typically retails for $60 USD. First we’ll take look at the official specifications of this product.

There’s more to a cooler than just it’s heat sink. The fans included have a huge impact on cooling performance and noise levels. Included with the FUMA 2 are the Kaze Flex 120 PWM and the Kaze Flex 120 Slim PWM fans.

In addition to the heat sink and fans, Scythe also includes thermal paste, a screwdriver, and additional fan clips so that you can install a 3rd fan for increased cooling performance if desired,.

I tested both the Noctua NH-U12S and the Scythe FUMA 2 in my home’s computer room with central air set to 73F. Both coolers were tested using Noctua NT-H1 thermal paste.

I tested each cooler with unlimited power limits and an enforced 100w TDP (to simulate an overclocked 65w CPU, such as AMD’s Ryzen 5 5600x) using both the “standard” and “full speed” profiles available from my motherboard.

Prior to testing at each TDP level, I would run AIDA64 CPU & FPU Stability test for one hour to soak the room with the heat generated from the CPU to ensure consistency in results.

The first tests were done with a TDP enforced at a 100w limit, because most consumers considering this cooler will likely be using a mid-range CPU like the Ryzen 5 3600x. Both coolers performed on par with each other – with the FUMA 2 winning some tests by a small margin, and the NH-U12S winning other tests by a small margin.

When switching to the “Full Speed” fan profile, both coolers see improvements – but the Noctua saw better improvements, resulting in it outperforming the FUMA 2 by a small margin. However, it did so at the cost of a higher noise level – whereas I couldn’t tell the difference in noise level using the FUMA 2.

I also wanted to see how the FUMA 2 performed with a space heater under extreme conditions. In order to see how much it could really handle, I tested it with the i9-10900k – the hardest consumer CPU to cool on the market – with no power limits.

In AIDA 64, both coolers thermal throttled with a CPU power consumption of just under 200w. The Noctua held slightly higher clock speeds, with 4803mhz vs 4745mhz.

The fans included with the Scythe FUMA 2 have both pros and cons. Because the included fans are low RPM, no matter what setting I used for fan speeds I was unable to discern the sound of the CPU fans from the rest of the computer, which will be appreciated by those who want a quiet build.

On the flip side, the low RPMs are also limiting the potential performance of this cooler – I imagine this cooler would perform better with higher RPM fans. I’ll be exploring this further and testing the FUMA 2 (and other coolers) with upgraded fans in a future article.

I definitely recommend the Scythe FUMA 2 over the Noctua NH-U12 because it is a better value and cheaper at $60 USD, it is *much* quieter, and also has better upgrade options due to having 3 slots where one can attach a 120mm cooler.