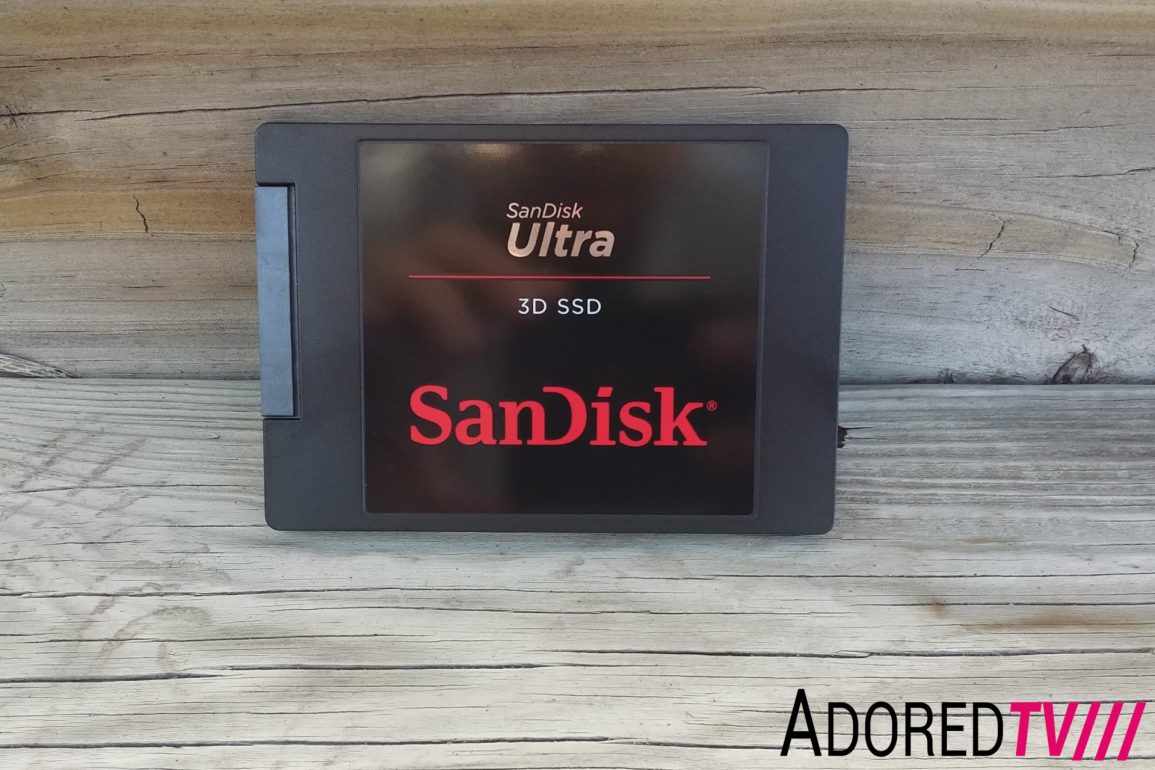 SanDisk has been known by those in the tech world for some time now. Although they’ve been owned by Western Digital the past few years, the company still sells products under the SanDisk brand for consumer loyalty. The SanDisk line will be aiming at brick and mortar stores while its twin the WD Blue SATA drive will be aimed at channel and system integrators. Though now, they are both available on Amazon and Newegg.

As the 3D implies in the name this model uses 3D NAND specifically 3D BiCS NAND made by Toshiba, and use an in-house Controller made by Western Digital.

The drives come in capacities from 250GB to 2TB and the model shown is currently $119.

While many other sites use an all Intel test bed, I personally use a AMD Ryzen system, since if there are any possible bottlenecks for AMD users they should be able to see them, and variety is the spice of life!

In sequential speed the reads are up there with the Superboot2 and Crucial MX500 though rather surprisingly its sequential writes were higher than everything else. That being said sequential speeds are the ones you run into the least.

Again this drive somehow beats the Crucial MX500 1TB by less than a percent in 4k writes though does end up losing in 4k reads by about 8% though the two drives take a lead over everything else tested.

For the large file size test, we see all drives being competitive except the silicon power drive while the Patriot Burst seems to keep up pretty well in the reads.

The more realistic small file size test shows the SanDisk’s weakness in very small file reads. Something that both the Crucial and Silicon Power drives do a great job with keeping up in.

Again in the 4K tests, we see the SanDisk drive do a very good job of keeping up against the market leader, MX 500 here.

The access time shows us the SanDisk trails behind the other drives in write access time, which is unfortunate as it has roughly double the latency of other drives. This may explain some of the inconsistent performance in the shorter workloads.

In sequential performance, it actually beats out the MX500 in reads, but loses by a hair in write performance.

For our test we use Diskbench’s transfer function to move a folder. In this case, The Witcher 3’s entire installation folder, from one drive to another. The score is recorded in Megabytes per second (MB/s).

Here we see the 3D Ultra come in second place to the MX500, just as most other benchmarks have displayed.

Also, let us know in the comments if you would like any other file type transfers done in these tests in the future.

At the price of $119.99 for the 1TB model, The SanDisk 3D Ultra is priced about the same as the Crucial MX500 which is a better drive overall. The WD Blue variant of this drive is currently available for $109 and in general I would always recommend the cheaper variant, given they are the same drives with different branding.

When deciding which drive to purchase, I would say when the Ultra 3D is at least $10 cheaper than either the Samsung 860 EVO or Crucial MX500, I would recommend picking it up. It makes a solid OS drive for most consumer uses and a fantastic secondary drive.

The warranty is the standard 3-year limited warranty, and the endurance ratings for both the Ultra 3D and the WD Blue SATA drive are as follows:

In closing, I was pretty surprised at how close the SanDisk 3D Ultra kept up to the Crucial MX500. It offers rather solid performance in day to day tasks. While some other drives may be cheaper, this a pretty high tier performer for a SATA drive and costs only a few bucks more than the cheapest drives available. At the right price it is a fairly easy recommendation.