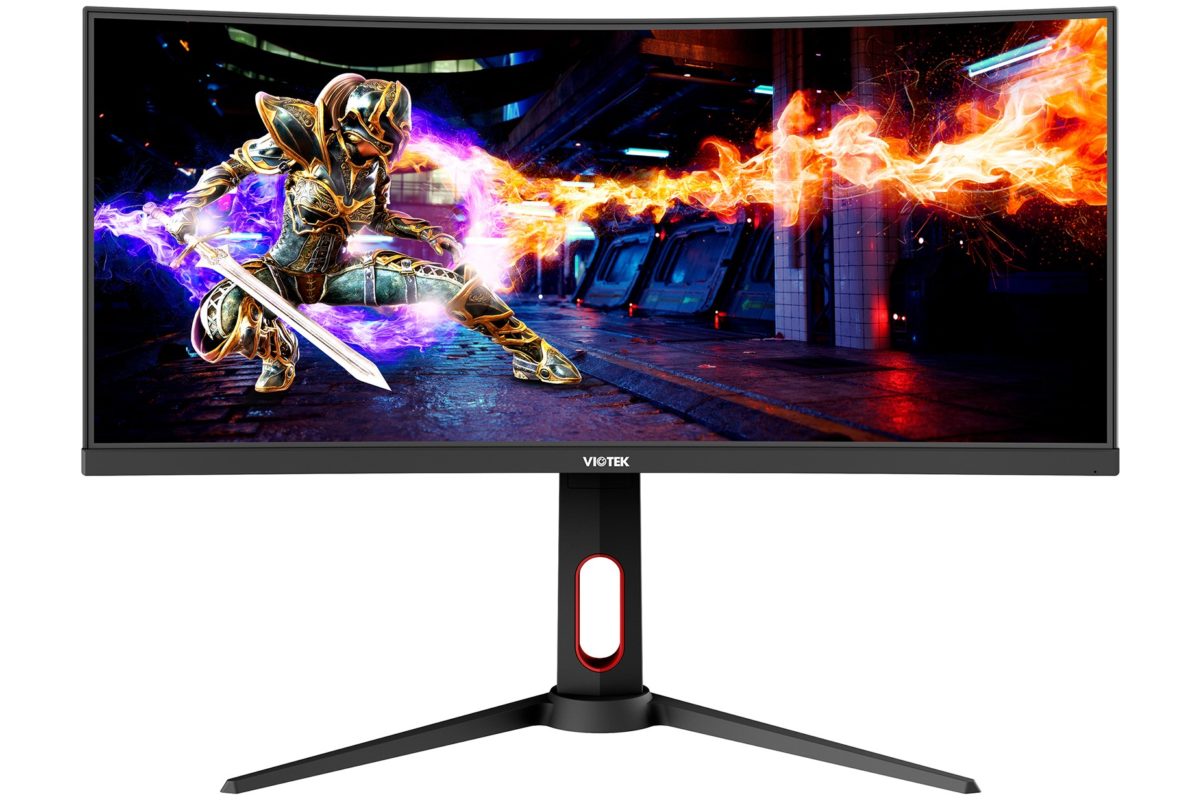 Today we’ll be looking at Viotek’s new GNV30CBXA, a 21:9 gaming monitor with a 200hz refresh rate. Last year I tested their 120hz GNV29CB, and found it comparable to Nixeus’ EDG34. How does this model compare? Read on…

There aren’t many makers of small ultrawide monitors – let alone with high refresh rates – as it is a very niche market. Viotek is one of only four brands which users in North America can choose from for 29″ Ultrawides. The 120hz model Viotek released last year, the GNV29CB, was the first high refresh rate 29″ Ultrawide Monitor I had heard of.

At 30″, this isn’t the biggest monitor in town. It’s roughly comparable to a 24″ screen in height, but wider. Rather than the 3440×1440 resolution you would find in larger ultrawide monitors, this monitor is “only” 2560×1080. Some might find that bothersome, but that still gives you a respectable 94 PPI (compared to 110 for a 3440×1440 monitor). The GNV30CBXA comes with a 1800R curve, but honestly you’ll never notice the curve unless you’re looking for it.

The monitor arrives in a standard brown box, with molded styrofoam for protection.

Setting up the GNV30CBXA was a breeze, you don’t even need any tools to put it together. Setting it up is a simple matter of unscrewing the bolt at the bottom with the attached handle, then slip the neck of the monitor stand onto it, and re-secure the bolt. From there the stand snaps into the back of the monitor. The GNV30CBXA is also VESA compatible allowing you to use 3rd party Monitor Stands or Arms, if you prefer.

My biggest annoyance with last year’s GNV29CB was it’s stand, as it offered no height adjustment and only minor tilting adjustments. The GNV30CBXA’s stand is vastly improved, offering height adjustment, a wide tilting range, swiveling, and even allows you to run it in full vertical mode – if you’re so inclined.

The monitor is controlled by buttons on the back, which is slightly annoying as they are cramped next to each other tightly and you can’t tell what button does what unless you look at it. The OSD, pictured below, is simple and includes all standard options. It comes with an unexpected feature, 3-way PBP, meaning you can connect 3 different video sources to the monitor at one time. You’re also given options to customize the multi-input modes.

Colors on last year’s Viotek GNV29CB and Nixeus EDG34 were very over saturated, in comparison this years model is more accurate and balanced. The GNV30CBXA I received had acceptable “out of the box” colors, requiring only minor adjustments due to a green tilt. I used an i1 Display Pro Plus for calibration.

For reference, after calibrating my settings were: Blue 37, Green 42, and Red 47.

Viotek rates the panel at 300 nits, we found our model to have slightly better performance at 308 nits of maximum white luminance.

Viewing angles were great on the GNV30CBXA, with virtually no color shifting.

Variable Refresh worked perfectly using Radeon, Nvidia, and Intel Graphics. It a variable refresh window of 48-200hz using DisplayPort. No stuttering was ever perceived when testing. While both last year’s model and the Nixeus EDG34 had brightness flickering in certain scenarios with FreeSync enabled, I haven’t found a single scenario where the GNV30CBXA exhibits flickering.

While I don’t have the sort of equipment needed to do a in-depth, TFT Central style analysis of response times – I can give a basic overview. When Viotek told me this year’s model was using an AOU VA panel instead of a Samsung panel, I was a bit concerned due to prior experiences with other monitors using AUO’s VA panels. Fortunately, these concerns were mostly unfounded.

Overall, response times are overall better than last year’s GNV29CB and Nixeus EDG34. When I tested those monitors using the built in benchmark for Assassin’s Creed : Odyssey, there was significant perceptible trailing in the parts which panned buildings. With this year’s GNV30CBXA, the same scenes appear smooth and crisp. However, transitions in the darkest of scenes due suffer a bit because of the AOU VA panel.

Fast, Ultrawide, and Cheap are three words I’ve never used to describe a 21:9 monitor before – but in this case, the description is accurate. Viotek’s GNV30CBXA provides a great value in a highly niche market, and is substantially improved versus it’s predecessor with faster refresh rates, better response times, and a vastly better stand.