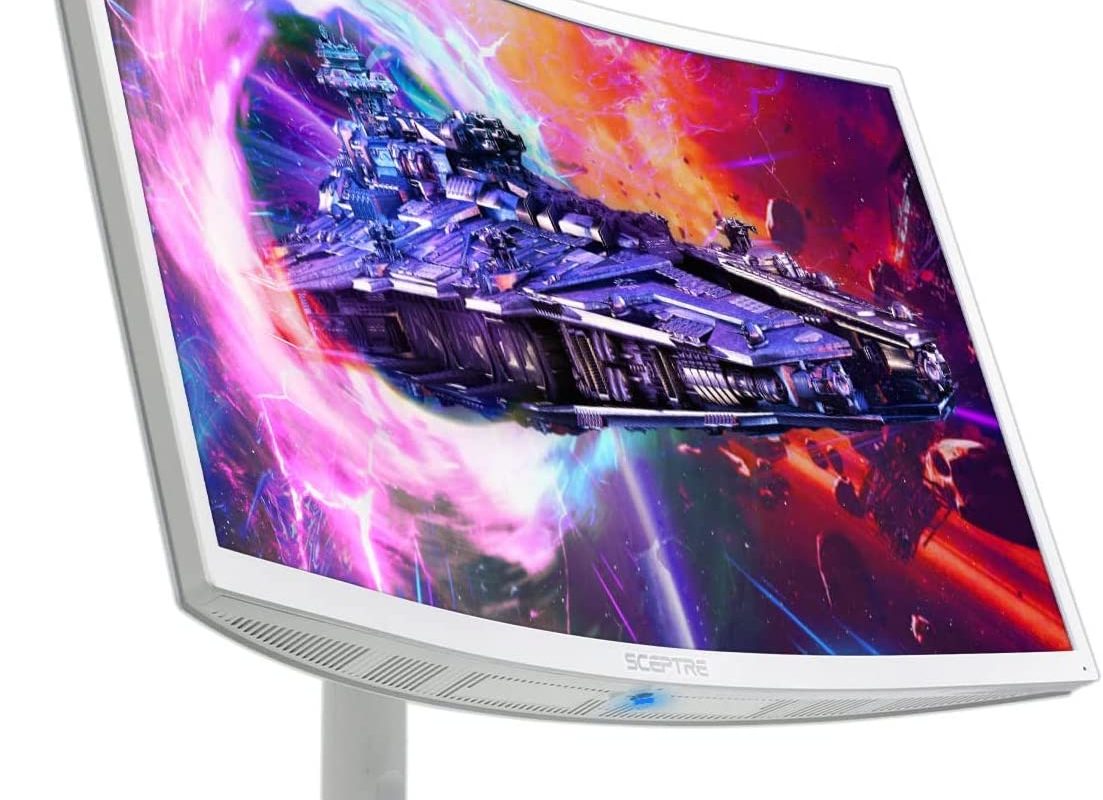 This is the best 16:9 monitor I’ve ever tested

Today we’re looking at Sceptre’s C275B-QWN168W aka C27 Nebula, which is quite honestly the best 16:9 monitor I have used thus far. When I first started testing this monitor, I didn’t realize it was a VA model – I honestly thought it was an IPS KFS monitor based on it’s vivid colors and crisp response times. Let’s take a look at it’s specifications before diving into the review.

The monitor arrives in a standard brown box, with molded styrofoam for protection, as most monitors do. The back of the monitor comes with USB-C, HDMI 2.0, and DisplayPort connections.

Included in the box are the User Manual, Monitor Stand, Monitor, Power brick, VESA Adapter, screwdriver (for installing the VESA adapter), and gloves!

Yes, I said gloves. Sceptre wants to make sure you don’t accidently smudge the monitor while setting it up, and includes complimentary gloves to wear while installing the monitor.

The installation of the C275B-QWN168W is simple, requiring no tools whatsoever. Setting it up is a simple matter of screwing in the bottom of the stand to the neck via the thumb screw…

…and then slipping the neck into the back of the monitor.

The included stand will satisfy most users needs – with support for vertical and horizontal titling and height adjustment (it does not support swiveling).

This monitor has a strong curve with a 1000R radius, which initially concerned me – but I quickly adjusted to this during normal usage.

The on screen display (OSD) is controlled by a single button control, similar to many LG monitors.

Many monitor manufacturers all use the same generic OSDs, but Sceptre is one of the exceptions – sporting a fully custom design for their OSD. Color, Picture, and System sections are pictured below. The “Quick Start” (not pictured) section has a selection of the most commonly used monitor settings for easy access.

As mentioned previously, when I first tested this monitor I didn’t realize even realize it was a VA panel – I legimately thought it was an IPS model based on response times and the vibrancy of colors. The image below shows a comparison of the previously reviewed Nixeus EDG27x IPS KFS monitor to Sceptre’s Nebula C27 VA monitor.

When looking at the results above, keep in mind that the colors shown above are different due using different cameras (and I couldn’t remember the exact settings I used for the NX-EDG27x photo), the important part is to look at the trailing – which shows virtually the same results as the IPS monitor.

This astounded me, as I never in my life thought I’d see a VA monitor producing results similar to a Fast IPS monitor. I haven’t noticed trailing in any of the games I have tested in. I don’t know if it actually hits the advertised 1ms response times – you’ll have to wait for Hardware Unboxed or TFT Central for those test results – but considering this result in on part with Fast IPS, I expect detailed measurements of response times to be good.

Colors are vivid on this panel, better than any VA monitor I have ever used and as good as any IPS monitor. The “out of the box” RGB settings were perfect according to my calibration tool, requiring no adjustments whatsoever. The Nebula C27 is the brightest monitor I have used – Sceptre rates this monitor at 600 cd/m2 typical brightness, while I measured it at 564 nits.

HDR on this monitor is phenomenal, and is the best HDR I have seen on any monitor thus far. Even the Windows desktop looks good with HDR enabled – whereas previously it looked washed out using other monitors. With HDR disabled the brightness is a bit overwhelming for desktop usage, but this can be fixed by enabling the “Ambient Light Sensor” option in the Monitor’s OSD, which adapts the monitors brightness so that it’s not blinding anymore.

While the quality of the HDR was breathtaking in gaming, in certain dark scenes the backlight bleeding was perceptible – giving it a “washed out” look near the edges of the monitor. I personally wouldn’t consider this a deal breaker, but it was annoying in a few scenarios.

Unfortunately, my monitor calibration tool had incompatibilities with Windows 11 and as such I wasn’t able to take detailed HDR measurements or contrast measurements.

Variable Refresh worked perfectly using Radeon, Nvidia, and Intel Graphics in gaming. It a variable refresh window of 48-165hz using DisplayPort. I did notice brief brightness flickering while loading a Horizon : Zero Dawn save game, but haven’t noticed it in other situations.

I also tested the monitor in scenarios that I had seen flickering with other VA FreeSync monitors I had tested. In many of these scenarios, I wasn’t able to replicate flickering on the new Sceptre monitor. In some scenarios, such as Civilization V AI turns with V-Sync enabled, the flickering happened – but was less frequent and less severe in comparison to previous VA Monitor. I also noticed annoying brightness flickering in some desktop programs with dark environments – for example, Cinebench.

This monitor also includes built in speakers – and while they weren’t the loudest speakers (you wouldn’t want to use them in a loud enviroment), they were of surprisingly good quality for built in monitor speakers.

Color and Lighting uniformity was near perfect on this monitor, with only one result showing notable variance.

Viewing angles were great on the on the Nebula C27, with no perceptible color shifting and barely perceptible gamma shifting.

Conclusion – A VA Monitor just as good as an IPS KFS Monitor, with killer HDR to boot!

I have to say I really enjoyed this monitor. I truly thought it was an IPS KFS monitor based on the quality of the colors and the response times of this monitor while first testing the unit, it wasn’t until Sceptre’s representative on the Monitor Enthusiasts Discord server corrected me that I realized it was actually a VA monitor.

The HDR on this monitor is great, and really brought games like Cyberpunk 2077 and Horizon : Zero Dawn to life. This is the first monitor I’ve tested where the Windows Desktop actually looks perfect with HDR enabled, and not washed out in any manner. The built-in speakers aren’t loud, but they are of good quality.

There are many options for Fast IPS 1440p 165hz monitors in the $399-$499 USD price range, but none that HDR1000 that I know of. This monitor is just as good as those monitors, but has intense HDR support included for the same price. One year ago I would have never believed you if you had told me a VA panel would have just as good as response times as a Fast IPS Panel, but here we are today.

I absolutely loved testing this monitor, and I really wish I had better tools so I could give you a TFT-Central or Tim from Hardware Unboxed style review with more in depth response time measurements because this monitor is really just that good. This was the best experience in a monitor I have had for a long time, and that’s not something I say lightly. I give it our Gold Award because quite frankly, this monitor kicks ass.

Sceptre’s C27 Nebula is currently available for $429.97 on Amazon.com