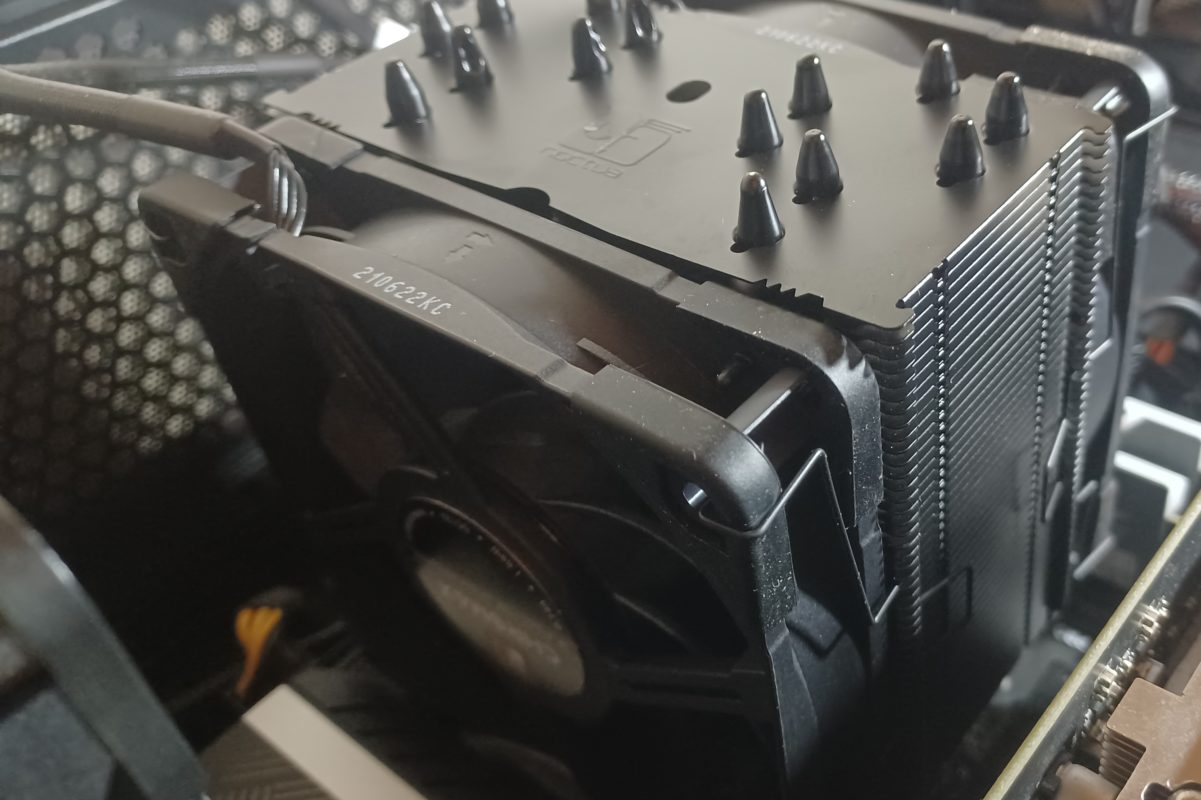 Today we’ll be looking at Noctua’s NH-U12A chromax.black and testing it with Intel’s i9-12900k.

While previous generation Intel CPUs such as the i9-11900k or i9-10900k, a quality cooler could handle up to 300w loads – but with Alder Lake most coolers throttle around 220w in loads like Cinebench. This happens because the increased thermal density of the 10nm++ Intel 7 manufacturing process in comparison to the 14nm process of previous generation coolers.

The NH-U12A arrived in a medium sized box, with padding on the sides for protection of the outside of the box, and cardboard protection for the insides of the box.

The installation of this cooler on LGA 1700 was fairly simple, as detailed in the picture taken from the user manual below.

Noctua’s mounting brackets are amongst the easiest to install on the market, and their customer support is top tier – they support their coolers with complimentary bracket upgrades when new sockets are released and don’t charge for things like replacement screws.

To test the limits of thermal capabilities, I have tested Cinebench with 3 TDP settings: no power limits, 200w, and 140w. OCCT includes 200w and 140w results. I’ve also tested Cyberpunk 2077 and Assassin’s Creed : Odyssey results, as these are the most thermally demanding games I own.

Since all previously tested coolers – with the exception of MSI’s s360 CoreLiquid – have failed to keep the i9-12900k under TJMax while running Cinebench with power limits removed, that was the first thing I tested. When power limits were removed, the NH-U12A was able to cool approximately 220w of power consumption in long term loads while operating at TJMax. This result is in line with other high end air coolers, and most liquid coolers, that are on the market.

While testing Cinebench, Noctua’s NH-U12A performed better than both the AK620 and the EX360 AIO, and only 1 degree behind Noctua’s larger NH-D15. However, with OCCT with a 200w power limit the situation was reversed – the U12A was the worst performing cooler which technically passed the testing, and it did so while reaching TJMax.

Now some folks might scratch their heads when seeing gaming thermal results, but at stock settings the i9-12900k will use up to 123w of power consumption in Cyberpunk 2077- making it a realistic “real life” example of a medium intensity heatload. In these results the NH-U12A performed similarly to it’s closest competitors.

I don’t feel the equipment I currently have is good enough to perform a proper scientific test of the loudness levels of CPU Coolers, but I would say that the noise level of Noctua’s NH-U12A was about the same as the NH-D15 – but with a higher pitch.

The Noctua NH-U12A chromax.black performs well as an air cooler with Alder Lake, able to handle up to 220w long term loads when paired with Intel’s i9-12900k – performing almost as well as the bigger NH-D15. The all-black asthetic of this cooler will appeal to those who are tired of seeing RGB plastered everywhere, and Noctua’s top-notch customer support means you’ll know this cooler will be supported for years to come.