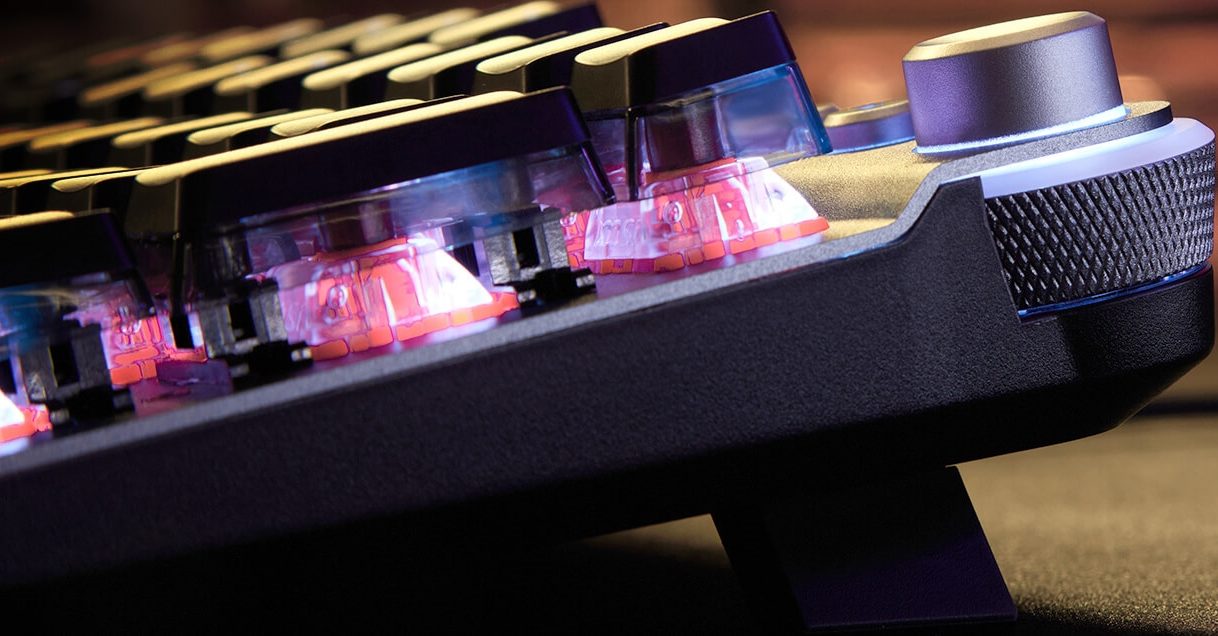 MSI is a company that most of us know for their Graphics Cards and Motherboards, and I recently reviewed their CoreLiquid K360 AIO CPU Cooler, but did you know they also made keyboards? I didn’t until recently. Today we’ll be taking a look at a review sample of MSI’s VIGOR GK71 Sonic, a full sized mechanical keyboard that comes with MSI’s Sonic Red switches.

It seems like most of the mechanical keyboards that have been coming out recently are smaller keyboards – TKL 65% and such. Don’t get me wrong, I like some of these smaller keyboards and currently use DeepCool’s GK722 65% TKL keyboard for my gaming rig. But when it comes to something I do actual work with I prefer a good “old fashioned” full sized keyboard.

MSI’s VIGOR GK71 Sonic breaks the trend of small keyboards – it offers a full size 104-109 (depending on language) key keyboard. At $129.99 USD, it’s at the higher end for pre-built mechanical keyboards but still much cheaper than many “fully custom” mechanical keyboards. How does it hold up? Read on for more information.

MSI’s VIGOR GK71 SONIC is a very light keyboard, at 854g it is a little heavier than DeepCool’s 65% KG22 keyboard. The housing frame is made of plastic, but it is sturdy and exhibits only minor bending when forcibly flexed. The top frame is made of “Aircraft Grade” Aluminum Alloy, pictured below.

The GK71 has adjustable legs, however unlike many other keyboards which open towards the back of the keyboard, the legs on the GK71 are oriented vertically.

What’s different from other keyboards

While most keyboards do not include a wrist rest, MSI’s GK71 includes an extremely comfortable one – it’s made of premium memory foam and one could almost use it as a pillow.

An “X” shaped indention forms across the underneath of the wrist rest and keyboard, allowing cables to pass under the keyboard without stretching or tangling. This can be useful for things like headphones.

The keycaps that come with the keyboard are a little different than most keyboards. The bottom 2/3 of the keycaps are fully transparent plastic, the top third is black with translucent etchings for key markings. I’m not sure what the material the black part is made of, but it feels very smooth.

Through the MSI Center software, one can create macros and fully customize the RGB lighting. If you prefer not to download MSI’s software, you can also change the lighting effects via key commands.

The “Game Sync” feature will synchronize the lighting with events happening in supported games such as Assassin’s Creed: Odyssey.

When it comes to noise levels, MSI’s GK71 is quieter than most other keyboards I have tested. Rather than a sharp “clack” sound, the keys give a dampened, somewhat hollow sound upon impact.

Below are recording showing the loudness of MSI’s SONIC GK71, DeepCool’s KG722, and Keychron’s K8 keyboards. I would note that I feel this recording makes the keyboard sound a bit louder than it actually is, and doesn’t quite capture the hollow sound of keypresses.

I don’t claim to be an expert on mechanical keyboards, I can only talk about my experience with the keyboard as I use it. For these keyboard reviews, I use the products at my day job which involves a lot of typing, and use the boards exclusively for 1-2 weeks to get a proper feel of how the unit performs. While testing I used all of these keyboards with a wrist rest.

The following is my subjective view on how MSI’s GK71 compares to Keychron’s K8 & ROCCAT’s 121 AIMO.

The keys on the Keychron’s K8 with Gateron Reds tended to land hard and fast, with the slightest of resistance as they fall. I had to adjust my typing to be lighter with the K8 or my fingers would hurt a little bit, as when I typed heavily the tips of my fingers were impacted somewhat.

In comparison, the keys on MSI’s GK71 also land fast, but not quite as hard. I did have to adjust my typing to be slightly lighter than normal to avoid mashing my fingers, but not by much. Typing on the GK71 Sonic was fairly quiet, to the relief of my office co-workers.

Overall I would say the GK71 would be best compared to ROCCAT’s 121 AIMO in terms of quality. The software support between ROCCAT’s Swarm software and MSI Center is similar, but ROCCAT offers more customization tweaks. Both models include wrist rests, but I prefer MSI’s wrist rest with premium memory foam over the solid rest included with the 121 AIMO.

The typing experience on the AIMO is the most comfortable of any keyboard I have tested thus far, as I found it virtually impossible to mash my fingertips on it – but the GK71’s keys are nearly as comfortable to type on, and offer slightly faster typing speeds with MSI’s SONIC Reds switches.

Typing speeds were similar between the Keychron K8 and DeepCool’s KG722 with Gatteron Reds switches and MSI’s VIGOR GK71 SONIC. The GK71 was louder than ROCCAT’s 121 AIMO, but quieter than any other mechanical keyboard I have tested.

I was originally planning on using the GK71 with my gaming rig, but I ended up keeping the keyboard at the office for it’s phenomenal typing quality and because it was quieter than other mechanical keyboards (which my co-workers appreciate).

I really enjoyed testing MSI’s VIGOR GK71 SONIC, much more than I usually do when testing keyboards. My only “complaint” about this board is that it isn’t hot swappable, as I would really like to test this board with other switch types. I can only hope MSI will at least offer other switch types as an option in the future.