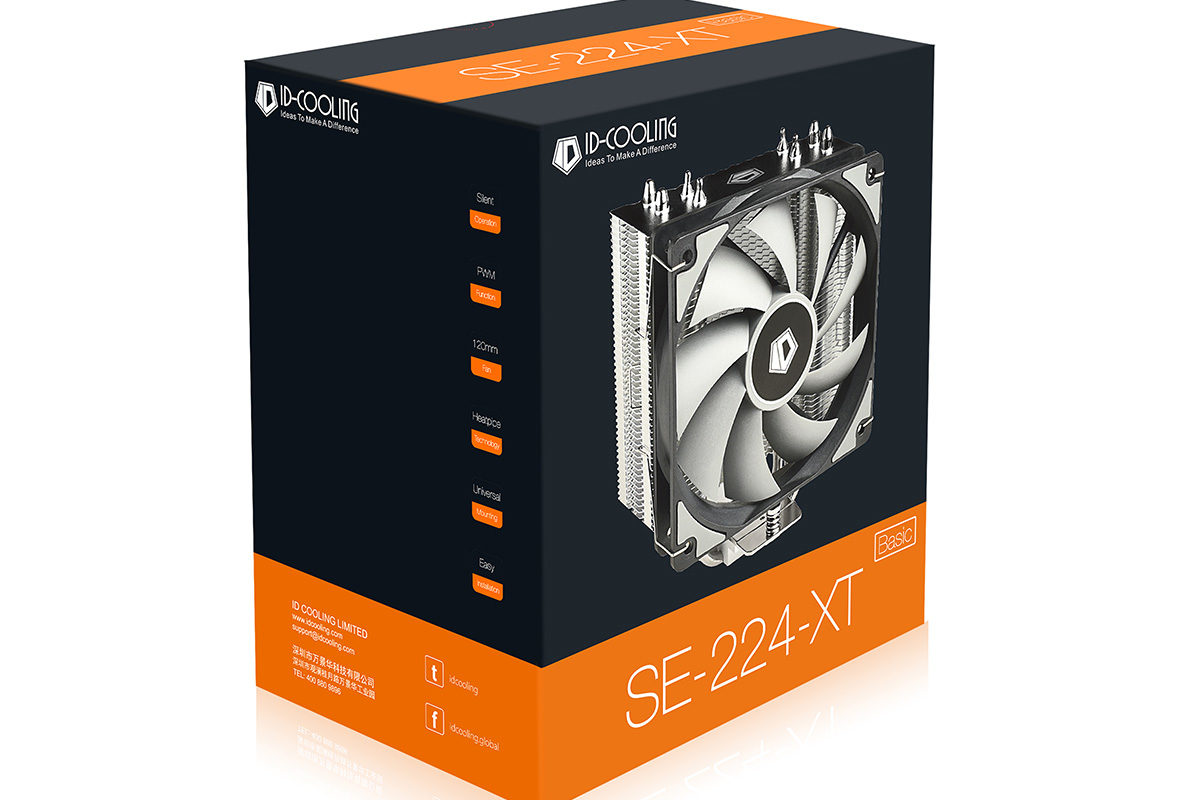 I usually focus on midrange or high end coolers, but recently I’ve had requests from readers to cover lower-end coolers. Today we’ll be looking at ID-COOLING’s SE-224-XT Basic, an entry level cooler which retails for $29.99 USD. This cooler is officially rated for 180w, but can it really handle that much heat?

Before we dive into benchmarks let’s take a look at the cooler and it’s packaging.

The SE-224-XT comes in a small box, with foam packaging for protection.

Included with the package are the user manual, thermal paste, mounting parts for AMD & Intel based systems, fan brackets for 2x fans, 1x 120mm fan, and the heatsink.

The installation of ID COOLING’s SE-224-XT was simple and straightforward. Attach the back plate, add the standoffs, attach and then secure the mounting rods, and finally install the heatsink and fan.

With the other coolers I have tested, I used Noctua’s NT-H1 thermal paste for all cooler testing to eliminate any variances that could be caused by using different pastes. However, I felt that most users looking at a $30 USD cooler were not likely to have extra thermal paste – so for the testing of ID-COOLING’s SE-224-XT Basic I used the ID-TG25 thermal paste included with the packaging. For the most demanding loads, such as Prime95, I also tested the SE-224-XT Basic with an added Scythe Kaze Flex 2 140mm 1200 RPM fan to see how much better it would cool.

For Cinebench and AIDA64, I ran each test for 10 minutes – but removed the first 2 minutes of temperature data to account for the warm up period (testing for longer periods did not produce significant differences). For games, I used a scripted benchmark and averaged the results of 3x runs. I tested each cooler with no power limits, as they were each capable of handling the heat.

AIDA64’s CPU & FPU test is fairly demanding – and the SE-224-XT ran a bit toasty at 89c (over 25c ambient). Adding Scythe’s Kaze Flex fan to the ID-COOLING cooler barely helped at all, only improving performance by 1c.

Prime95 Small FFTs was the only load where the SE-224-XT Basic couldn’t handle the heat well, but in this load it was consuming an average of 245w and while throttling due to hitting TJMax it still maintained 4.66ghz – and really that’s pretty good considering that it’s dealing with 65w more TDP than it was actually designed to handle.

Adding a second fan is mostly pointless as it produced results which were only marginally better, increasing clockspeeds by 20mhz.

In gaming ID-COOLING’s SE-224-XT Basic performed well. In the most demanding load tested here, Far Cry V, it topped out at a maximum temperature of 73c.

I purchased a Decibel Meter to more accurately report acoustic information, but I found it difficult to take consistent measurements with it – so instead of using the Decibel Meter, I’ve taken audio recordings of the fans during stress tests and analyzed them with Orban Loudness Meter. ID-COOLING’s SE-224-XT wasn’t what I would consider a “quiet” cooler – but keep in mind this testing is done at 100% fan speed.

I was originally hesitant to test entry level coolers because I didn’t think any of them would actually be able to handle a i9-10900k in power hungry loads, but the ID-COOLING SE-224-XT Basic proved me wrong. In fact, in the most power hungry of loads it outperformed BeQuiet’s new Shadow Rock Slim 2 – which is 50% more expensive.

While this isn’t a cooler you’d want to use for overclocking an i9-11900k, and would be best paired with something easier to tame like a Ryzen 5600x, it can definitely handle any desktop CPU at stock speeds. It is rated for, and can actually handle 180w comfortably – which was quite surprising given it’s $30 MSRP. For it’s combination of good performance and low price, I’m giving the SE-224-XT Basic our Gold Award.