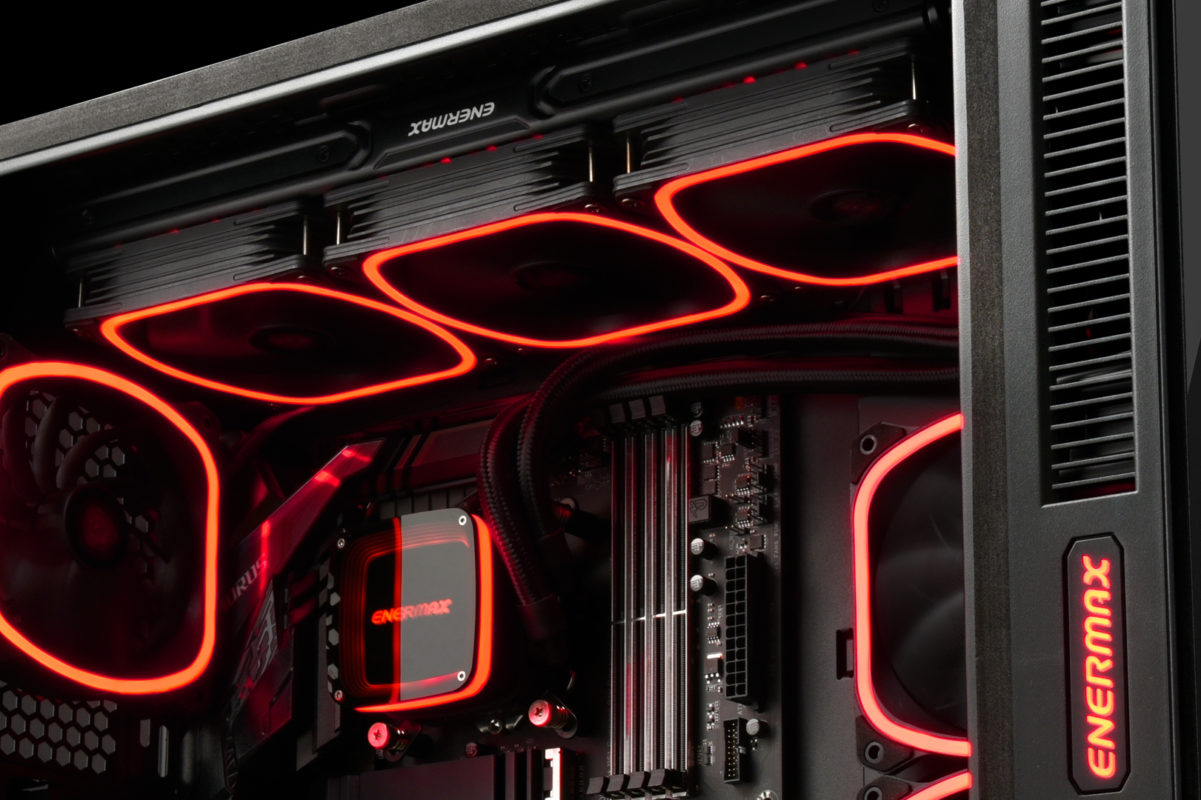 With previous generation Intel CPUs such as the i9-11900k or i9-10900k, a quality cooler could handle up to 300w loads – but with Alder Lake most coolers throttle around 220w in loads like Cinebench. This happens because of the increased thermal density of the 10nm++ Intel 7 manufacturing process in comparison to the 14nm process of previous generation CPUs.

Enermax’ Aquafusion 360 is packaged in a fairly large box, with molded cardboard for protection.

The installation of this cooler on LGA 1700 was fairly simple, as detailed in the picture taken from the user manual below.

There’s more to a cooler than just it’s heat sink. The fans included have a huge impact on cooling performance and noise levels. It’s important to note here that the SquA RGB fan included with this AIO is stronger than the SquA fan that you can purchase individually – it has stronger airflow and static pressure, and is louder because the fans are faster (2000RPM vs 1500RPM).

While most AIO coolers on the market use Asetek designs, Enermax’ Aquafusion 360 uses an in-house, dual-chamber design.

To test the limits of thermal capabilities, I have tested Cinebench with 3 TDP settings: no power limits, 200w, and 140w. OCCT includes 200w and 140w results. I’ve also tested Cyberpunk 2077 and Assassin’s Creed : Odyssey results, as these are the most thermally demanding games I own.

Since all previously tested coolers – with the exception of MSI’s s360 CoreLiquid – have failed to keep the i9-12900k under TJMax while running Cinebench with power limits removed, that was the first thing I tested Enermax’ Aquafusion 360 with – and while it technically passed my testing in this scenario as it did not throttle, it did so while reaching occasionally reaching TJMax. In this scenario the CPU consumed ~230w of electricity.

Moving beyond the Cinebench results without power limits, when TDP limits are enforced the Aquafusion outperforms DeepCool’s Castle EX360 A-RGB by 2-3c and BeQuiet’s PureLoop 280 by 1-2c.

Now some folks might scratch their heads when seeing gaming thermal results, but at stock settings the i9-12900k will use up to 123w of power consumption in Cyberpunk 2077- making it a realistic “real life” example of a medium intensity heatload. In these results the Enermax AIO outperformed it’s closest competitors by 1-3c.

I don’t feel the equipment I currently have is good enough to perform a proper scientific test of the loudness levels of CPU Coolers, but I can give you enough information without these tools.

The long story short is that the Aquafusion is quiet in lighter loads, but while running Cinebench with no power limits it gets a bit loud – louder than any of the other coolers I’ve tested on Alder Lake. Because of this, I also tested the AquaFusion 360 with 2x Noctua NF-F12 2000 PWM industrial fans and 1x Scythe Kaze Flex fan. This configuration ran quieter than the stock configuration, but thermal results remained the same.

I’m giving Enermax’ Aquafusion 360 the Silver Award because it’s a good value AIO cooler ($120 USD) that technically passes all of my thermal tests (a test only one other cooler has passed), but It fails to get the Gold award because the fans get louder than they should in the hottest of loads.