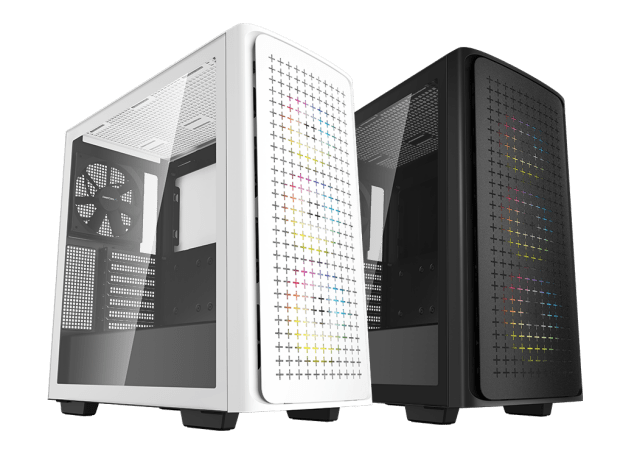 DeepCool is one of our favorite cooling companies, we’ve previously reviewed their AK620 CPU Air Cooler and the CASTLE EX360 AIO Cooler. Today we’ll be looking at the CK560WH, a new mid-tower case from DeepCool. This version of the case comes in white, but a black version is also available. Like most other computer cases, it comes in a cardboard box – protected on the inside by molded styrofoam and a plastic cover.

While the CK560WH isn’t the largest of cases – it’s still pretty big, measuring 456×230×471mm. It weighs 8kg, moderately heavier than the previously reviewed DeepCool Matrexx 55 Mesh (6.6kg) – but much lighter than the Silent Base 802 case we use for CPU cooler testing. The CK560’s case is comprised of ABS, SPCC, and Tempered Glass.

We’ll start with the front of the case. At the top, you have the IO panel which comes with power & LED control buttons, 1x USB-C, 2x USB-A, and an audio port.

The front panel has a design of cross cutouts in a grid, and is comprised of a solid steel panel.

The cross-grid design of the front panel also allows for illumination to bleed through when the RGB lighting of the front fans is enabled.

Behind the steel front panel is a mesh dust filter.

There is another dust filter at the top of the case

The main side panel is comprised of tempered glass.

And the rear looks similar to most other PC cases

The rear of the case leaves a large space open near the CPU socket of the motherboard, allowing for easy installation of CPU brackets. 2x 2.5″ drives can be mounted below the CPU, and in the front corner there is a disk bay for larger drives or for additional 2.5″ drives.

The inside of the case is fairly simple, with 3 RGB fans on the front for intake and one non-RGB fan on the rear exhaust. There is support for a 240mm radiator (or additional fans) at the top, if one desires to install a 360mm radiator that can be accommodated if you remove the pre-installed front intake fans. There is also an adjustable arm to prevent sag on larger graphics cards.

To test thermal performance, I setup the same system in both DeepCool’s CK560WH and the Silent Base 802 from BeQuiet (a larger case which costs over twice as much). Those parts included a MSI z690 A Pro DDR4 motherboard, DeepCool’s AK620 CPU Cooler and PQ1000M PSU, G-Skill DDR4 RAM, and a RTX 2070 GPU.

I ran the same tests I use when testing the thermal performance of CPU Coolers – OCCT, Cinebench, and gaming. In those tests, the CK560WH’s temperatures were 1-2c higher than the Silent Base 802. Noise levels were similar between the cases.

DeepCool’s CK560 is a nice mid-tower case that provides good cooling performance while running silently. This is a quality product that gets the job done well. I have no complaints about this product and would recommend it to anyone looking for a new computer case.