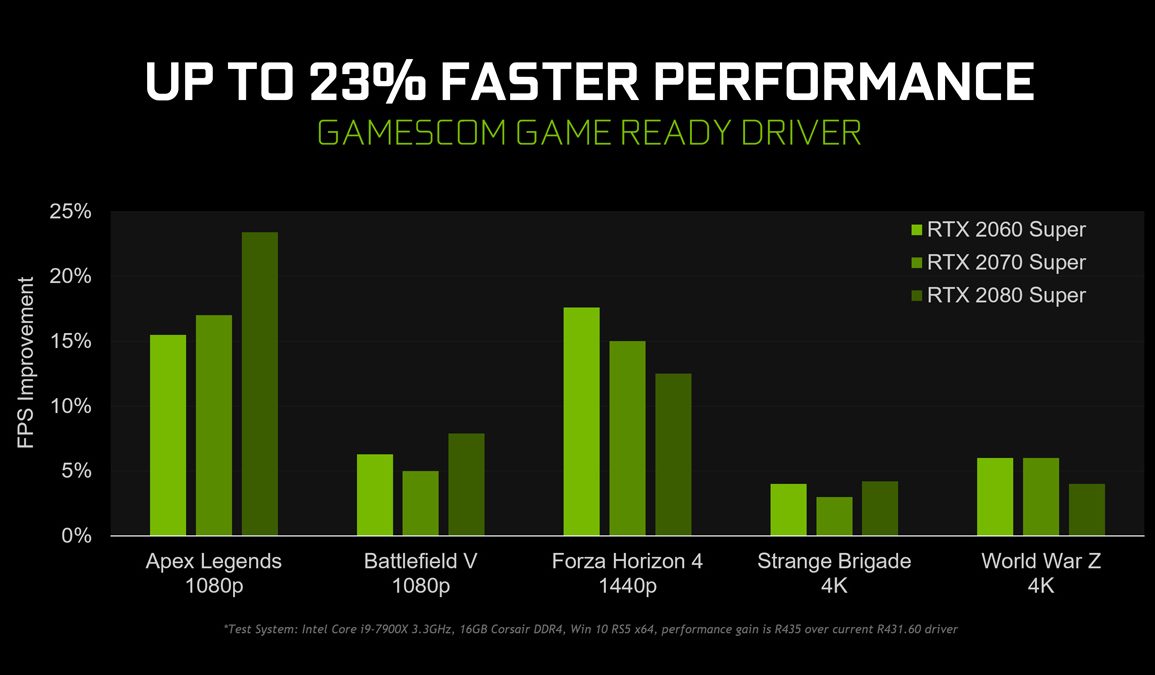 As a special celebration for Gamescom 2019, NVIDIA is releasing a Gamescom Game Ready driver, providing up to 23% performance uplift in Apex Legends, Battlefield V, Forza Horizon 4, Strange Brigade and World War Z. In addition to that usual fare of performance optimizations, NVIDIA is adding a load of new features to their drivers. Let’s break it down.

Up To 23% Performance Uplift

Compared to the previous NVIDIA driver, Apex Legends, Battlefield V, Forza Horizon 4, Strange Brigade and World War Z all receive significant performance gains, especially at 1080p of course, but notably quite high uplifts at 1440p as well. The obvious focus on 1440p and 4K resolutions on Forza Horizon 4, a game which we’ve seen the new Radeon 5700-series cards have a significant performance advantage in, certainly seems to help level the playing field and should make comparisons a lot closer in future benchmarks. But performance improvements, actually, is a fairly minor note in the list of features and improvements in these Gamescom celebratory drivers.

In what seems to be NVIDIA’s attempt to reinforce the idea they have had a feature that is basically Radeon Anti-Lag for years now, they renamed an existing 3D Setting, “Maximum pre-rendered frames,” to “Low Latency Mode” to better explain what the setting does and made the selection more user-friendly. From their release notes:

Just how much does this impact latency? NVIDIA provides us with a quick chart of common games that would benefit from reduced response times.

Some of these titles were also shown in AMD’s Anti-Lag benchmark slide. Apex Legends went to 37ms, compared to the 29ms shown for “on” by NVIDIA, Fortnite was 36ms compared to 32ms “on” for NVIDIA, and The Division 2 was 30ms with Anti-Lag vs NVIDIA’s 33ms “on” (pulling off a 22ms in “Ultra”). I compare vs “on” rather than “Ultra” as it’s likely a more-similar comparison. We’ll see how the actual in-game perception of the improvement is and if there’s any noticeable performance or frame-time issues from this. NVIDIA claims you get this boost in responsiveness without sacrificing visual fidelity. We saw minimal FPS impact from Radeon, and will likely see minimal impact, performance-wise, enabling this feature too.

Integer Scaling has been a desired option for Retro and Pixel Art games. FTL, Hotline Miami, and Terraria appear blurry when scaled to higher-resolution screens. Sadly, the programmable scaling filter used to do Integer Scaling is in Turing-based cards, so is only available to GeForce RTX and GeForce GTX 16-Series GPUs.

GeForce Experience picks up a new filter for NVIDIA Freestyle. Freestyle allows you to apply and stack custom filters to games, on an individual (or global) basis. The new filter is a Sharpen filter, which improves image quality and performance compared to the existing “Detail” filter. NVIDIA claims the performance hit is only half what the Detail filter had. Obviously this sounds very similar (and is likely a response) to AMD’s FidelityFx, however, NVIDIA claims their solution is different than “other solutions” because they give you the ability to customize the amount of sharpness, from 0 to 100%, and apply it on a per-game basis using their in-game overlay. They also claim they have a broader API support, so let you enhance over 600 games in DX9, DX11, DX12, and Vulkan.

To activate the Freestyle In-Game Overlay, just press Alt+F3 and you can add the new Sharpen Filter, and your preferences will be saved for each game separately.

The ASUS VG27A, ACER CP3271, and ACER XB273K GP join the ranks of “validated” G-SYNC Compatible monitors. That means these monitors turn on G-SYNC by default and have adequate Variable refresh rate range and presents no flicker, blanking, or artifacts.

A feature that has existed in NVIDIA’s Studio Driver since July, the new Game Ready Driver now adds similar support for all products, including GeForce and TITAN.