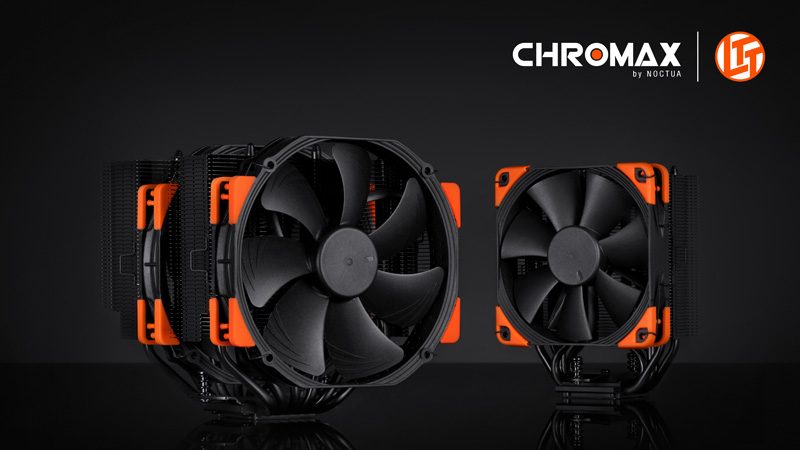 Having teased this for quite some time now, Noctua is finally releasing its Chromax branded CPU coolers which are a refresh of their most popular coolers but in black. Three new Chromax models are available for the NH-D15 (which we reviewed here), the NH-L9i (which we haven’t reviewed, but we have reviewed its AMD counterpart here), and the NH-U12S. They come with black heatsinks, black fans, and those rubbery corners on each Chromax Noctua fan can be swapped out with different colored pieces.

As far as we know, these coolers don’t deliver better or worse performance on either the heatsink or the fans. Prices are also pretty much the same so buying Chromax versus the original heatsinks comes down to whether or not you like one look or the other.

There is also a limited edition Linus Tech Tips version for the D15 and the U12S coolers. The first 5000 coolers sold will be this limited edition, so after they’re all sold, they won’t be available for sale ever again. The main difference on these limited edition coolers is that the rubber corners of the fans are orange, which is a signature color of Linus Tech Tips. Noctua has not mentioned if there are any other differences (such as increased likelihood to fumble the cooler as you try to install it), but it seems it’s just an exclusive color for the fans.

Chromax might appeal to anti-RGB reactionaries who prefer a subtle, darker look to their builds, but it’s probable that a wide variety of people will see some appeal in Noctua’s new coolers. The most popular complaint about Noctua is the color scheme (which even Linus says on in the Noctua press release), and in that context Noctua will likely benefit much from having another color to choose from on its most popular coolers.