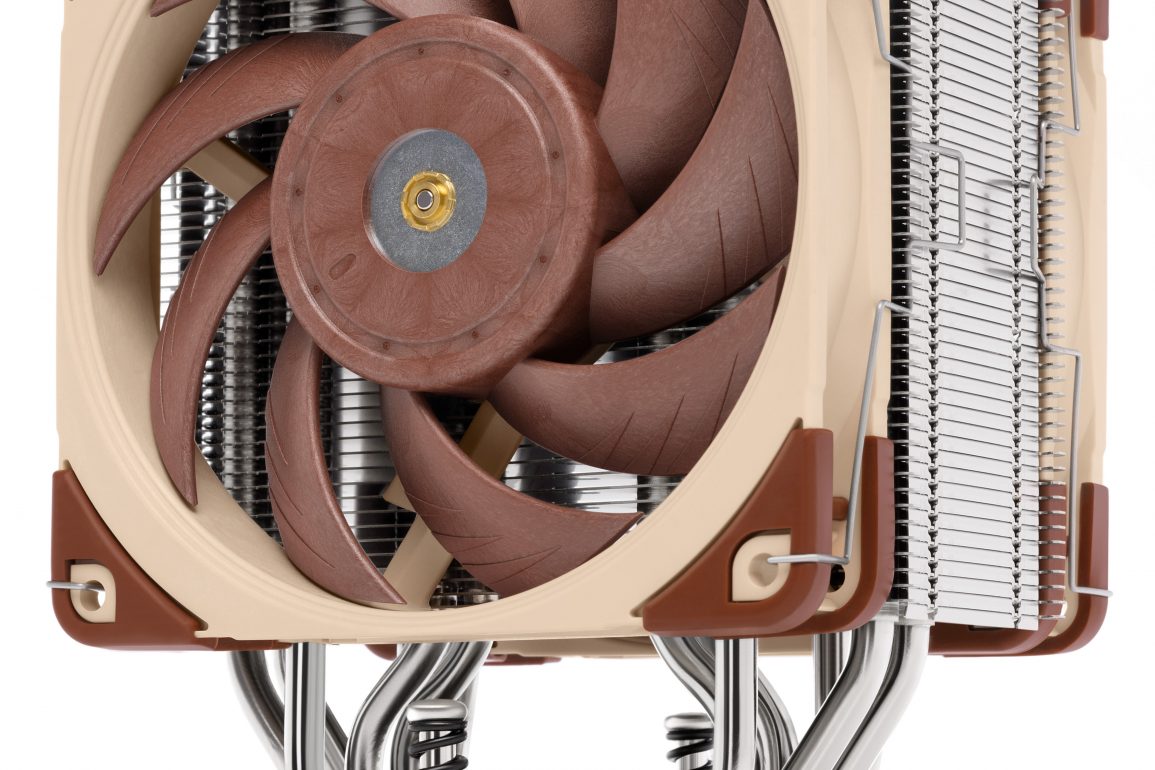 For a while now, I’ve been using all in one (or AIO) liquid coolers in my main PC. I thought, as so many others do, that liquid must be better than air. It’s in all the high end PCs, after all, liquid must be the way to go if you want high performance, and AIO is just a cheaper, more value oriented version of that. Air cooling is just what comes with your CPU by default and it’s what all the cheap coolers are, it’s not for performance.

Or is it? Today, I’ll be taking a look at that with Noctua’s NH-U12A, which they sent me for use on my brand new test bench, though I figured I might as well do a quick review on it too. This is a ~$100 air CPU cooler, and equipped with two fans it sits about in the same price and specification bracket as AIOs such as Corsair’s H100i v2, which is what I have decided to pit the U12A against.

WHAT COMES IN THE BOX

I found the contents of what Noctua sent so remarkable that I decided I should make a section dedicated just to that. Noctua really went above and beyond with the accessories and other things they included with their cooler.

Firstly, you do of course get the CPU cooler, with its two 120 mm fans that are mounted without the use of screws; you instead hook them onto the fins of the heatsink. This method is convenient provided you have the room, though sometimes I had a bit of a hard time hooking them on when I was working on the side next to the GPU. Still, the inclusion of two very high quality fans with no tools needed to mount them is very nice.

You also get some fan cable accessories: two low noise cables and a two way fan splitter. The low noise cables have a resistor inside of them in order to weaken the electrical signal that goes to the fan, and this reduces the maximum speed they could be. The fan splitter is used to put the two included fans on the same cable and fan header. Perhaps I’m out of touch with what comes in CPU coolers these days, but I was still impressed.

Finally, there was a neat little badge included as well. It bears the Noctua logo and it’s fully made of metal, differentiating it from the stickers that usually come with these products. I probably won’t end up attaching it to anything, but it’s interesting at least.

I used the following parts on my test bench:

Keep in mind this test bench is still in progress; the GPU and PSU are just placeholders, though thankfully they won’t affect testing in any meaningful way.

I also did not use Noctua’s included thermal paste and instead used a graphite thermal pad since this is my preferred thermal interface for the test bench. It does not transfer heat as well as thermal paste, but it’s not so much worse that it will turn a good cooler into a bad one. Thanks to using the oversized larger variant of IC’s thermal pads, the entire IHS of the CPU was covered during testing.

I tested 5 benchmarks: Prime 95’s blend test, AIDA64, Cinebench R20, Blender’s official benchmark, and the AI benchmark in Civilization VI: Gathering Storm. These results should show you the worst and best cases for cooling in general as well as more realistic cases. Let’s get to the results now.

This is by far the H100i’s worst result. It didn’t trip thermal protection on the overclocked 2700, but it came dangerously close to it. By contrast, the U12A stayed far away from the threshold even with the low noise adapters on.

On stock, the U12A and H100i have similar thermal performance. The U12A does have a lead, but it’s not exactly significant. Oddly though the gap is much smaller at stock than it is when overclocked.

I actually included a maximum temperature bar just in this benchmark because when overclocked, the 2700 wouldn’t really settle into a constant temperature, frequent spikes in temperature would occur every 10-20 seconds. This is the only workload where this behavior occurred.

Overall, the U12A is far better on the overclocked 2700 than the H100i is. In fact, if you include the maximum temperatures, this result is worse than Prime 95 for the H100i, since these temperatures spikes could absolutely cause thermal protection to trigger with higher temperatures, though it has to be said that the U12A was also a little close with these spikes as well.

The more frequent load temperature also reveals another big disparity between the H100i and U12A when the 2700 is overclocked, as large as that found in Prime 95. At stock, however, the gap is tiny yet again.

The H100i was able to get below 90 C in Cinebench, thankfully, though the gap with the overclocked 2700 is still rather wide. Meanwhile, the gap at stock is again quite small. With similar results three times in a row, we should expect similar margins on the Blender official benchmark.

And as expected, similar margins. It seems that the more heat there is to dissippate, the worse the H100i does relative to the U12A. There is an explanation for this one, I promise.

Not exactly what you might expect based on the previous results. Yes, the H100i does in fact beat the U12A or at worst tie it. It might not have won against or tied with the U12A on the stock 2700 had I tested without the low noise cables, but still this is an entirely different result than we would expect. Why is the H100i pulling ahead in gaming?

Well, this is likely down to the GPU and the configuration I had for my test bench. In an open air test bench, the H100i and U12A were getting the same fresh air in the CPU intensive benchmarks. But the main difference when gaming is that the GPU is also being used, and guess where the U12A is? Right next to the GPU, and it’s sucking in hotter air. By contrast, the H100i was off to the side away from the GPU and was taking in air from the opposite direction of the test bench.

In an actual PC case, this might actually be worse, since the only way hot air can go in a PC is up, right into the CPU cooler. Depending on where the radiator is placed, such as on the bottom or front of the case, an AIO might perform better than expected in gaming when the GPU is producing a significant amount of heat. If placed at the back or top, however, an AIO would be sucking in the same hot air the U12A was.

I was also going to test the H100i with increased fan speed using Corsair’s iCUE software, but the USB cable required to plug into the block/pump interfered with the RAM due to the way I installed the AIO so I gave up. I don’t actually expect faster fans to help though since the radiator wasn’t really very hot. I suspect the reason why the H100i did worse was because the heat couldn’t be transferred quickly enough from the CPU to the radiator; perhaps the liquid or the pump used is the culprit.

I suspect that, when normalized for noise, the U12A would outperform the H100i, but I have no way of testing this precisely and accurately. Ultimately, I found that the H100i lost on the stock 2700 but won on the overclocked 2700 by allowing the CPU to get hotter than the U12A allowed.

Overall I would say the U12A is the better product in this price bracket, though the H100i might be better for some people depending on the use case. Though AIOs lose out on overall performance (and consequently noise since you can lower noise for higher thermals), they do have an advantage on mass, volume, and placement choice. I also felt like the mounting hardware for the H100i was less cumbersome than the U12A, which was a little difficult to screw onto the mounting hardware.

For high performance CPUs, air coolers and Noctua’s coolers in particular seem like the way to go. The U12A is more than enough for mainstream processors like the 2700, even when overclocked. I suspect the U12A could cool more powerful CPUs like the 3900X, but I’m not guaranteeing that, at least not with a graphite pad. Noctua’s included thermal paste might be able to get the job done.

I highly recommend the U12A for low temperatures and high performance, even if it is a little on the loud side by default. It’ll go great on my new test bench and should be able to keep my future 3700X cooled. You can pick on up at Amazon here.