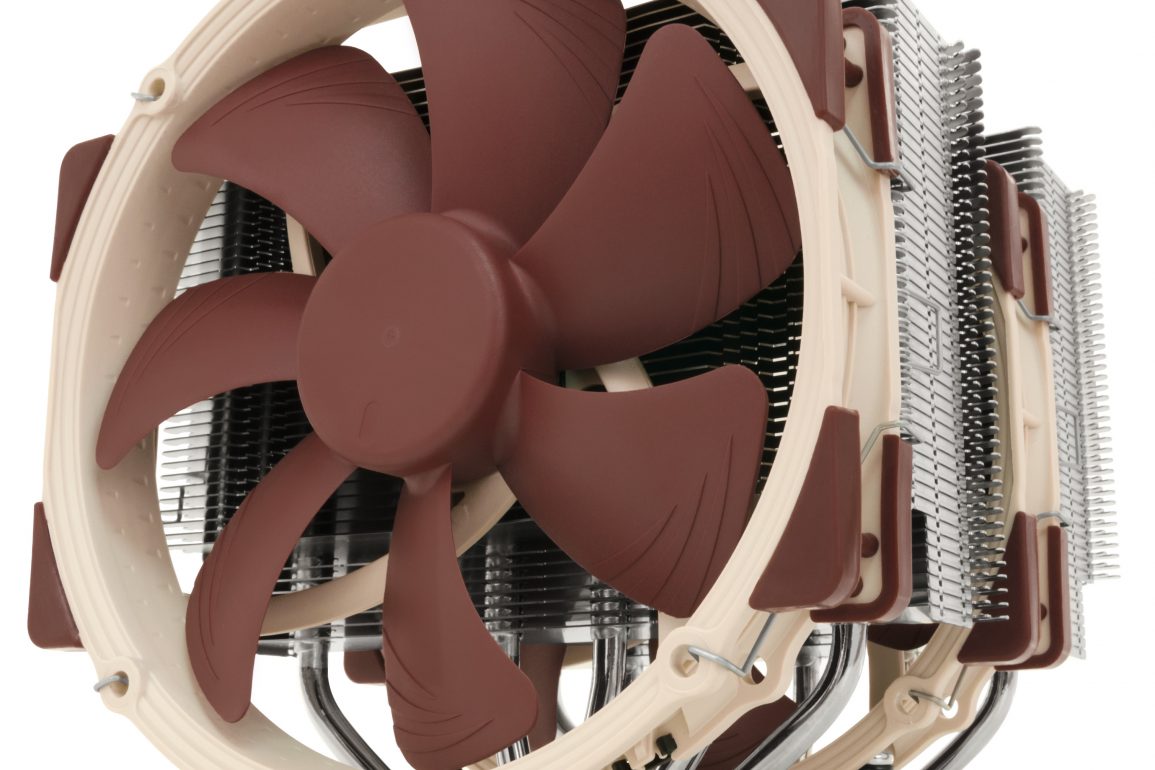 Previously I reviewed Noctua’s small, dual 120 mm fan CPU cooler the NH-U12A and I liked it, but what if I could have that but twice the size? Enter the NH-D15, which is basically the NH-U12A with bigger, 140 mm fans and two larger heatsinks. We’ll be putting the NH-D15 up against the NH-U12A and the Corsair H100i v2 to see which one can cool an overclocked Ryzen 2700 the best.

These coolers are around the $100 price point and are intended to be used for CPUs that are going to consume alot of power, like the 9900K and 2700X and overclocked versions of lower power SKUs. If you don’t need better cooling performance than a stock cooler or are just wanting a little better, then something cheaper might be better for you. When it comes to keeping high end parts cool, however, you will want to purchase one of these.

Just to clear things up on the table: Noctua and Corsair do not list CPU compatibility for the U12A and H100i v2 respectively, so the TDP ratings on the chart are just estimates. Corsair has a TR4 bracket for the H100i v2 but I’m not sure if I’m ready to call it a 180 watt cooler. I imagine the U12A, on the other hand, would have been rated to cool a 2700X at least.

Also note the pricing for the H100i v2, it is often times found on Amazon for $200 but it used to be available for around $100 and it does sometimes drop back down to that price. The similar H100i Pro is availabe for $140 and it’s basically the same cooler.

This review is basically another run of the U12A review but with the D15 and some methodology changes. We’ll be taking a look at the AIO vs. air cooler dynamic again.

Noctua provided me with the D15 and U12A. Thanks Noctua.

As these are all very large, high end coolers, I decided to overclock the 2700 to 4.05 GHz with a voltage of 1.35 volts. It should be a decent challenge to cool.

I tested with and without the low noise cables Noctua includes with their coolers. I tested the H100i v2 as it is intended to be, meaning the fans do not change speed by default, but if you use iCUE software you can set a semi-custom fan curve. You could also plug the fans into their own fan headers, though cable management will become necessary

The benchmarks I selected were Prime 95, the official Blender benchmark, and Civilization VI: Gathering Storm in both the graphics and AI tests. With all that out of the way, let’s get into the results.

With the typical fan speed, the D15 manages to just barely come ahead of the H100i v2, but this is so close it’s basically a tie. The U12A is behind but not too far behind. With the low noise cables, the D15 falls a little behind the H100i v2 and the U12A surprisingly doesn’t change at all in temperature.

The H100i v2 is well ahead even against the D15 which was apparently a little hotter than the U12A on normal fan speed, but I’m willing to chalk this up to sucking in the hotter air around the graphics card more easily. Imprecise data collection on the part of the CPU temperature may also be a reason since the D15 apparently gets cooler with the low noise cables, whereas the U12A increases in temperature moderately.

And again we see the H100i v2 comfortably ahead of the competition.

Surprisingly the D15 is sacrificing much in terms of noise to match the H100i v2 in thermal performance. The U12A was especially loud since it has to compensate for its lower mass. Things do get quieter with the low noise cables, but not by much and at the expense of thermal performance.

More of the same in Blender, though the D15 came really close to the H100i v2 with the low noise cables. Keep in mind that the H100i v2 cannot automatically change its fan speed in its intended confirguration without iCUE so it was always at 47 dB.

Surprisingly the D15 was very close to the H100i v2 with normal fan speed and actually comfortably beat the H100i v2 with the low noise cables. It should be noted, however, that this was at the cost of much worse thermal performance.

Now we’re back to the H100i v2 being in the lead, though with the low noise cables things start to narrow down between our three heatsinks.

If you read my U12A review, you may recall that I found the H100i v2 to have much weaker cooling performance than the U12A, by up to a 10 degree margin. However, in these tests, the H100i v2 was actually out in the lead by a decent margin on both thermal performance and noise, not only against the U12A but also the D15. You might be wondering how this could possibly be.

I believe the reason why the difference exists is in the testing methodology. I didn’t change the CPU, or the fan speeds, or any of the parts used, and I don’t believe improved data collection in this review revealed faulty data in the previous one, but what I did change was the thermal interface. Instead of using an IC Carbon Pad like in the U12A review, I used Noctua’s included thermal paste, and I believe this is why the H100i v2 is much more competent than previously. My previous theory that the pump in the H100i v2 was not sufficient for heat transfer is probably incorrect.

For some reason, however, it seems the H100i v2 really needs that vertical heat transfer to perform well, and here’s why I think that. Air coolers fan out and expand in order to transfer heat as soon as possible, making more contact across the entire base more useful, but an AIO is funneling all that heat right into the tubes, which are much smaller than the IHS. When getting heat to the center of the base is more important than getting heat to the entire base, then a carbon pad will not perform well.

If you think of a CPU cooler’s base like a target, imagine that an air cooler has a bullseye so large that it covers almost the entire target, while an AIO has a bullseye that’s pretty small like a bullseye normally is. If the heat is the arrow, then having 50 arrows all over the target is only going to work well on an air cooler, because most of those arrows will hit the bullseye on our air cooler but not on our AIO. Having a concentration of 50 arrows in the middle will be work best for both the AIO and the air cooler.

If you’re going to be using a carbon pad, then AIOs don’t seem to be the best option; air coolers are the way to go in this case. But, if you’re planning on using thermal paste as most people likely do, then an AIO becomes a great choice for thermal and noise performance. That is, of course, if you’re willing to pay up for an AIO.

When you consider the price difference, the D15 looks really good, even against the H100i v2 at $100. But, since the H100i v2 isn’t always available for a reasonable price, the only reliable option this class is the H100i Pro, which is almost twice the price of the D15 for similar performance to the H100i v2 which is similar to (though slightly better than) the D15. The D15 is simply an unbeatable value.

The U12A is also made rather weak by the existence of the cheaper D15; it does however provide only slightly worse thermal performance for a much smaller size, as long as you can tolerate it being much louder. If you can’t fit a D15, then a U12A is a good idea, but if you could fit an H100i v2 or Pro as well then I would probably recommend that instead.

This brings me into the general pros and cons of air coolers and AIOs. Air coolers are typically great value, very simple, and easy to place inside of a case, but are rather heavy, large, and can be a little noisy. AIOs have a much smaller volume than air coolers, sometimes better performance, and can look nicer in a PC, but they have more points of failure, are harder and more expensive to repair, and are more expensive in general.

So, my recommendations: the D15 is overall the strongest cooler in this lineup when you consider its performance and value, but if you can’t find the room for it or want something better regardless of the price, then the H100i v2 or Pro would be a great second option. The U12A is sort of in a complicated position. But, since it is usually cheaper than the H100i Pro it can still make sense if a D15 doesn’t work for you. If you can find an H100i v2 for $100, on the other hand, then the U12A isn’t really the better option.

Here are some links to the coolers in this review: