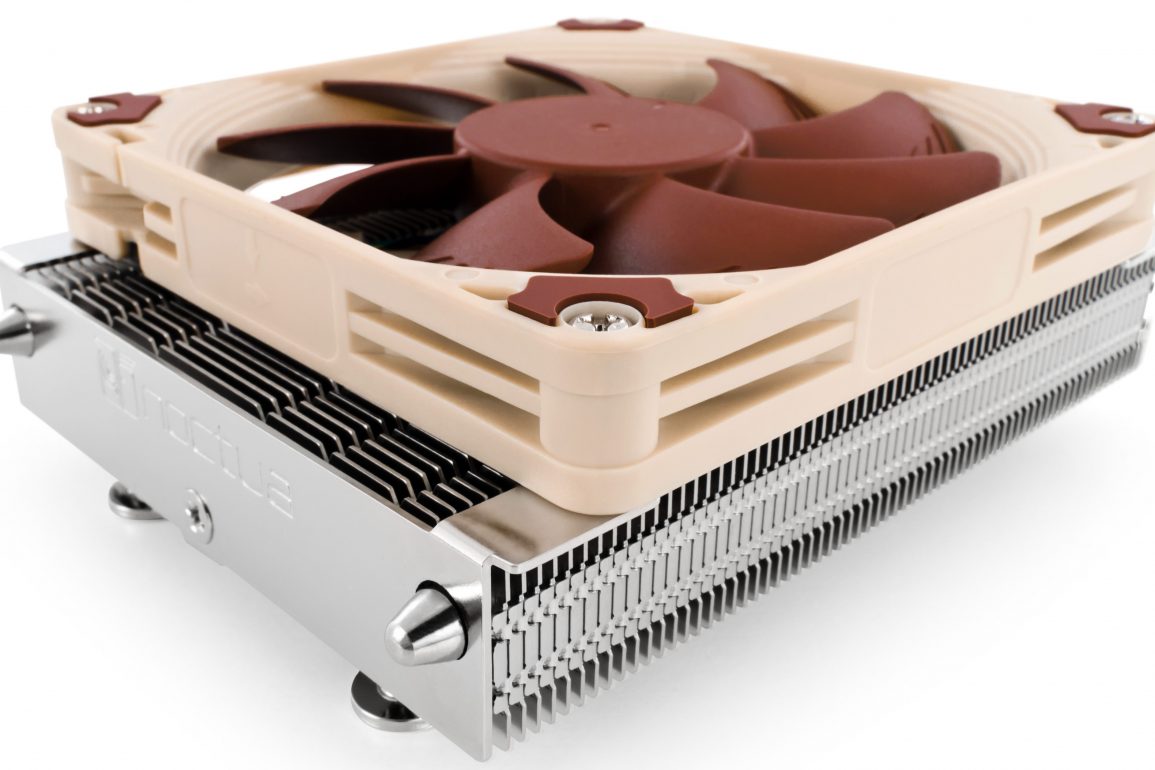 Although most CPUs come with a decent cooler in the box (unless you’re buying a unlocked K series CPU from Intel), there is a surprising amount of small, low profile coolers on the market. Noctua has three heatsinks that fit this niche, the NH-L12S, the NH-L9x65, and the NH-L9a-AM4. Today we’ll be putting them up against each other and AMD’s free Spire CPU cooler which comes with many AMD CPUs, such as the Ryzen 7 2700 which is the CPU we’re testing with today.

The AMD Spire cooler, AMD’s mid tier stock cooler, fits in between the L9x65 and L12S in terms of height and mass, by the way. If I had a Wraith Prism I would have tested it but I obviously don’t. The L9x65 does however look very similar to the Prism and it would have been interesting to see which one is superior.

Interesting to note is that the L9a-AM4 is significantly heavier than the L9x65 despite being barely over half the height. It only has two heatpipes and a pretty small base but its fins are very densely packed and are very wide, so I imagine that’s why this shorter cooler is heavier. It makes sense: in order to compensate for the reduced height in terms of thermal performance, the only realistic option is to increase density.

The L12S is the odd one out with a 120 mm fan and an equally large heatsink. Noctua rates the performance of the L12S as being higher than either the L9a-AM4 or the L9x65 without being much taller, which is important for cases with low clearance, though they achieved this by making the heatsink very wide and opening up the possibility of RAM clearance issues, though thankfully I did not experience any.

All of these coolers come with a rather large tube of Noctua’s NT-H1 thermal paste, a low noise fan cable, mounting hardware for several AMD and Intel platforms, and a cute little Noctua case badge.

Noctua provided me with all of their coolers for this review. Thanks Noctua.

Since these coolers are not high performance parts and since Noctua didn’t recommend overclocking on any of them, the 2700 was just tested at its stock 65 watt TDP. I also tested with and without the low noise fan cables for Noctua’s coolers.

The benchmarks I selected were Prime 95, the official Blender benchmark, and Civilization VI: Gathering Storm in both the graphics and AI tests. With all that out of the way, let’s get into the results.

In Prime 95, we can see that the Spire loses quite badly against the tiny L9a-AM4 and L9x65 at the default fan speed, with the L12S even further ahead of all of them. The cooling capacity of the L9a-AM4 is quite impressive especially in spite of its extremely small size.

When using the low noise cables, the Spire looks much better, but it only barely beats the L9a-AM4 and is still behind the L9x65. The L12S is still far ahead and it didn’t really allow the CPU to get much hotter despite running at a lower fan speed.

Again we see more of the same, the Spire runs at a much hotter temperature than any of the other coolers despite being taller than two of them. With the low noise cables attached, the Spire does beat the L9a-AM4 again, however.

Surprisingly the Spire actually pulls ahead very well in the normal fan speed benchmarks and soundly defeats both the L9a-AM4 and the L9x65 when the low noise cables are used. It’s not too far behind the L12S either.

The margins between the Spire and the L9a-AM4 and L9x65 aren’t as much in the Spire’s favor as before but the Spire still beats the L9a-AM4 on normal fan speed and almost catches up to the L9x65 when the low noise cables are used. The L12S is of course in 1st place still.

You might be wondering why the Spire was able to catch up in these gaming benchmarks despite being quite a bit behind on Prime 95 and Blender. My theory is that the Spire can dissipate heat decently well but due to its fin arrangement being less efficient and having less of them, not to mention not having any heat pipes, the Spire doesn’t really have much mass for heat to occupy.

So it’s not a big deal in Civilization VI where the heat output created by the 2700 isn’t that much, but it becomes more severe in things that put the 2700 to the limit. It might take some time for heat to get around in the dense and small L9a-AM4, but it at least has a ton of mass to occupy and then get dissipated. With the Spire, once it has to deal with a certain amount of heat, heat struggles to find a fin to be dissipated from and mass to occupy, so it’s lingering for longer than on Noctua’s coolers.

Here in Prime 95 we can see that the L9a-AM4 and L9x65 are a little bit louder than the Spire by default, so those lower temperatures are coming at a cost, but with the low noise cables these coolers become much quieter than the Spire at a similar temperature. The L12S comfortably leads all the other coolers but the gap closes significantly with the low noise cables installed.

Again, more of the same. The low noise cables don’t seem to make the L12S much quieter, nor did it seem to cool much less in the previous thermal results. Meanwhile the L9a-AM4 and L9x65 continue to be competitive on noise performance.

It’s mostly a tie on the normal fan speed and a slight victory for Noctua on the low noise cables. Since this test doesn’t really stress the CPU much this is more or less expected.

We do see somewhat more of a difference in the AI test when using the low noise cables. Again, not a huge difference since Civ VI isn’t saturing all the CPU cores.

Overall I come away from Noctua’s low profile coolers decently impressed. You can get good thermal performance or good noise performance depending on whether or not you choose to use the included low noise cables. They also come with a large tube of thermal paste each, and these tubes are so large that I still haven’t even come close to using one entirely after testing these four coolers.

I do have some criticism, however. The L9a-AM4’s mounting mechanism is really annoying. Basically, you have to install it before you even put the motherboard in the case, so it’s not easy to swap out, though I will acknowledge most people aren’t using 4 different heatsinks in a single day. Still, it was extremely difficult to line the CPU cooler with the screw holes since there’s nothing securing the heatsink in place. It’s just too difficult and too cumbersome to get the L9a-AM4 on a CPU; perhaps Noctua should think about using a solution like Intel’s stock heatsink, which is entirely toollessly installed.

There’s also the matter of price. The Spire, while being the clearly inferior cooler, wasn’t incredibly far behind any of Noctua’s coolers but the L12S. The value of the L9a-AM4 and the L9x65 is not great compared to the Spire which costs $0. If you had no heatsink (like for K series Intel CPUs) or a pretty weak one (like the Wraith Stealth) then these coolers make sense but you could still get something like a Hyper 212 Evo for almost half the price and similar performance.

That being said, there is obviously value in volume. A Hyper 212 Evo would not fit in the smallest of cases. The L9a-AM4 absolutely would, the L9x65 almost certainly would, and the L12S probably would fit in most ITX cases. These coolers are for niche uses, but for these niche uses they seem to be very competent.

Overall my recommendations: I highly recommend the L12S for mini ITX and other small form factor builds, so long as it fits. I did not test whether or not the L12S could handle overclocking but I imagine it could quite well as it performs very well both thermally and on noise. Even if you don’t need a low profile cooler, it’s really impressive in its own right. Not sure if it’s worth buying over something like a Hyper 212 Evo but it’s definitely great for low profile.

The L9a-AM4, while having a very frustrating mounting mechanism, did perform very well thermally and on noise while being the smallest and shortest cooler I have ever tested. Since it is also the cheapest cooler I tested here (other than the Spire) it’s much easier to recommend as well. I recommend it if you can’t fit in an L12S.

Sadly I don’t really recommend the L9x65. Although it was a good cooler, it’s as expensive as the much better L12S and more expensive than the equally as good L9a-AM4. When would you ever find yourself in a situation where the L12S wouldn’t fit in your case but an L9x65 would? It’s not that much shorter. Even if you did find yourself in such a situation, the L9a-AM4 is much cheaper and performs about the same. The L9x65 is a fine cooler but it’s really struggling to differentiate itself here.

Here are some links to the coolers in this review: