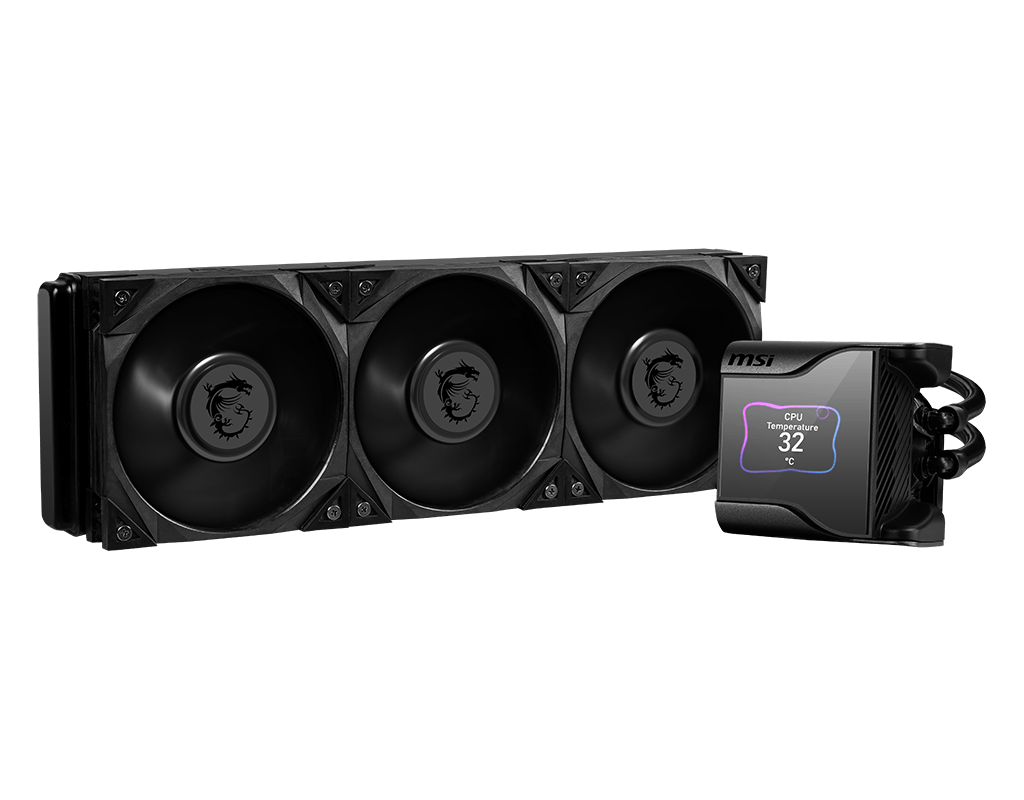 As I’ve mentioned in previous reviews, when power limits are removed Intel’s latest i9-12900k can prove quite challenging to cool effectively due to the increased thermal density of Alder Lake. Coolers which I had previously considered to be of the highest quality when paired with 14nm CPUs such as the i9-11900k or i9-10900k – handling loads of up to 300w – all throttled when attempting to cool the i9-12900k at above 220w.

I’ve been testing many CPU Coolers, but this review marks the first cooler that passes all of my thermal testing without reaching TJMax.

MSI’s CoreLiquid S360 is packaged in a fairly large box, with molded cardboard for protection.

The installation of this cooler was extremely simple, as detailed in the picture taken from the user manual below. I will note that when installing the standoffs, it felt like there wasn’t enough pressure until I had actually seated and secured the pump onto the CPU.

Using the MSI Center software, one can set this monitor to a variety of settings – you can use it to control the direction of the display and to show things like framerate, CPU temperature, videos, images, the time, or even the weather!

To test the limits of thermal capabilities, I have tested OCCT & Cinebench with 3 TDP settings: no power limits, 200w, and 140w. I’ve also included Cyberpunk 2077 and Assassin’s Creed : Odyssey results, as these are the most thermally demanding games I have tested.

Since all previously tested coolers had failed to keep the i9-12900k under TJMax while running Cinebench with power limits removed, that was the first thing I tested MSI’s s360 CoreLiquid with – and it was the first cooler to truly pass my testing.

In this scenario it used just over 230w of power consumption on average, peaking at 92c. For comparison, DeepCool’s CASTLE 360EX A-RGB ran at the same temperature when limited to 200w.

Moving beyond the Cinebench results without power limits, when TDP limits are enforced the CoreLiquid still performs very well but its lead shrinks. At 200w, it performed 3c cooler than BeQuiet’s Pure Loop 280 and 8c better than DeepCool’s AK620.

Our 140w results are curious, as all other high end coolers all stayed at 50c over ambient – and in this scenario, the s360 CoreLiquid led by 6c. OCCT’s performance margins are slightly smaller, with the MSI cooler’s advantage reduced to 3-5c in comparison with other liquid coolers.

Now some folks might scratch their heads when seeing gaming thermal results, but at stock settings the i9-12900k will use up to 123w of power consumption in Cyberpunk 2077- making it a realistic “real life” example of a medium intensity heatload. These results were particularly interesting, I did not expect MSI’s s360 CoreLiquid to have up to a 14c lead over a quality air cooler, especially considering that gaming is a less intensive heat workload (in contrast to Cinebench)

I don’t feel the equipment I currently have is good enough to perform a proper scientific test of the loudness levels of CPU Coolers, but I can give you enough information without these tools.

As the fans are actually connected directly to the AIO pump & IPS panel unit – they’re actually controlled directly by the cooler, and the default profile will only increase fan speeds if they are actually needed. This means that in loads which don’t produce a lot of heat, this cooler is almost silent – giving off a barely audible hum during operation.

During moderate loads the s360’s fans are slightly perceptible, and in the most heat intensive of loads it is moderately audible – but not loud, running quieter than DeepCool’s CASTLE 360 A-RGB – but a little louder than BeQuiet’s Pure Loop 280.

For those wanting to customize the speeds of the fans – either to tune for silence, or run at full speed – you can do this easily with the MSI Center software.

I was initially hesitant to give this product our Gold Award because of it’s extravagant $280 USD cost, but I can’t help but be impressed by it’s performance when it’s literally the only cooler to have passed all of my thermal tests without reaching TJMax. Alder Lake’s thermal density makes cooling high TDP loads a lot harder than cooling previous generation CPUs, and the MSI S360 CoreLiquid rises to the challenge.