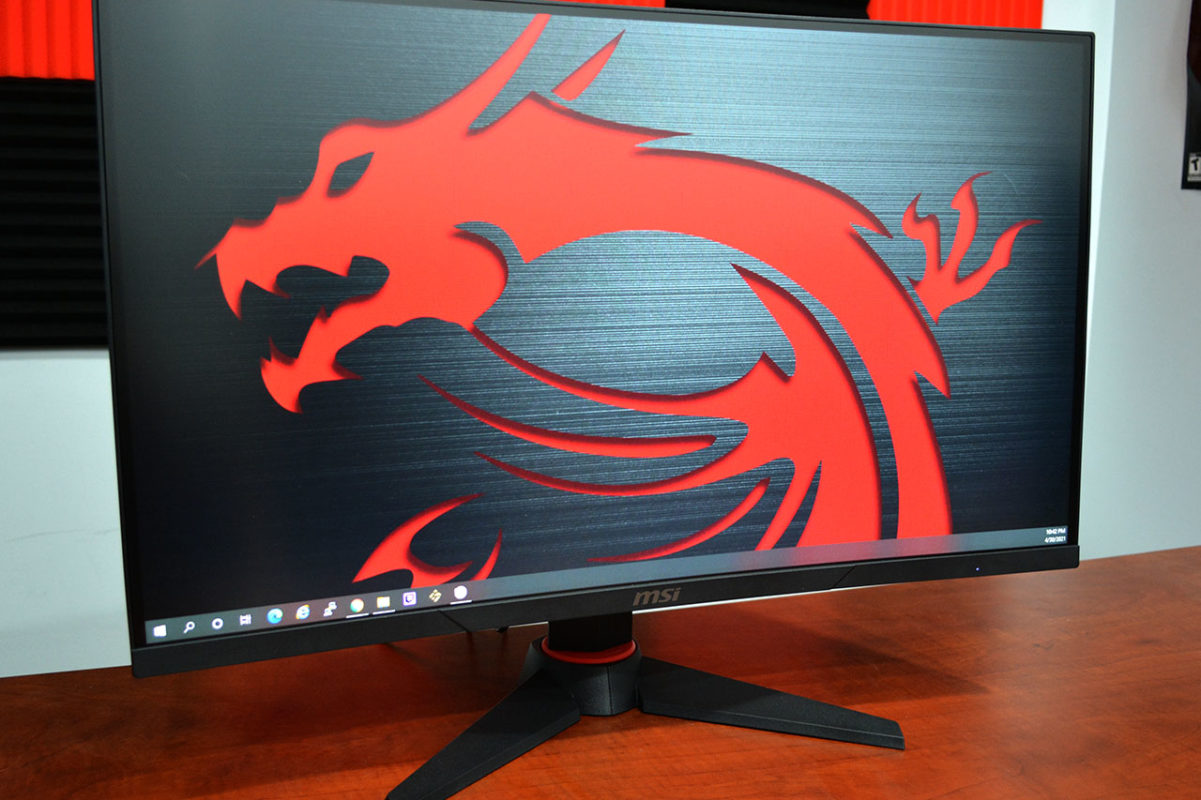 We have on our test bench today the MSI Optix MAG271VCR. It’s one of many monitors I’ve reviewed in search of a solid-but-affordable gaming display. The Optix we’re looking at was graciously loaned to me to review by a friend who will be using it for their primary gaming monitor and wanted it calibrated prior to putting into production. Let’s see how it stacks up.

The Optix’s specifications trade blows with other 27″ displays we’ve reviewed. RGB LEDs on the rear, the ability to swivel, and the slightly higher-than-usual 165Hz refresh rate are features that immediately stand out from the usual fare.

The Optix MAG271VCR boasts a “Frameless Design,” and while the bezel is only a mere 1/8″ wide, there’s a border around the VA panel that makes the “dark space” effectively 3/8″. The bottom bezel, featuring the MSI brand and the power light, is just shy of 3/4″ thick.

On the rear, we have a joystick for interacting with the On-Screen Display and serves as a power button when pressed in for longer than 3 seconds. The panel features an X-shape of RGB LEDs called “Mystic Light” that can be controlled with software via the USB 2.0 connection to the monitor. These LEDs can be set pulse, strobe, breath, and more to a number of presets and custom colors. The monitor stand is very sturdy and has some nice design choices if you’re a fan of red accents. I would have preferred a darker red color, but the lighter red works well enough. The cable management clip functions well, but can pop off if the cables get tugged.

Something hard to find is a picture of the actual connections on the underside of the monitor. While it’s not much to see, you can at least see the layout now.

The MSI Gaming OSD 2.0 software makes it quick and easy to adjust the monitor settings. The UI design makes a few things harder than it needs to be, in the interest of on-screen real-estate, such as the color temperature adjustments being hidden as active sliders in a pulldown menu. This tactic, however, allows many settings to be shown on a single pane, with toggles for on-screen display of refresh rate, aim assist, timer/alarms, night vision, and an array of ready-made presets.

Out of the box, the monitor was at a fairly dim brightness level compared to our preferred 250nits. We did manage to top out the brightness at 276.57 cd/m2, but we had to ruin the contrast settings to do it. Due to the monitor not able to hit the desired calibration when ran at our preferred 250nits level due to contrast washout, we backed the contrast and a bit of brightness down to 200nits to calibrate properly. Monitors like this are why many testing sites have standardized on 200nits for many years. With HDR400 and higher being introduced, however, I’d rather have a higher base-standard and simply mention when panels are not able to satisfactorily meet that mark.

With the monitor at 200nits, we balanced the RGB colors manually and then ran the calibration for the final tune profile.

With an Gamut volume for sRGB of 111.1% and a DCI-P3 of 78.7%, the MSI Optix lands just above our Acer 27″ which has an IPS panel. Granted, this is at a dimmer 200nits, where all our other panels in the line-up, except the Dell Professional-series 24″, were able to meet our 250nits baseline.

While the MSI Optix MAG271VCR isn’t listed on either the AMD FreeSync Monitors List nor the NVIDIA G-Sync Compatible list, the monitor readily runs adaptive sync over DisplayPort with no visual issues. I was unable to get adaptive sync to work over HDMI on a couple 10-series GeForce cards that I tried.

The MSI Optix MAG271VCR is a great gaming monitor. The visual design, from the red accents on the monitor stand to the RGB lighting modes on the back, shows MSI leaning hard into the gaming brand. The 1080p resolution might be disappointingly low for those that like more screen real estate, but for gamers wanting to keep their game fluid near the 165Hz that this screen can do, it’s an ideal resolution for a large range of GPUs. The panel used is fairly average, however, with color reproduction trailing other monitors we’ve tested at this price point. While the brightness of the panel trails others in our tests, the panel is by no means dim, and I have no concerns about anything ending up overly dark in games, as everything was properly bright and visible in our testing gaming sessions. Port connectivity was great, but we’d have liked to have seen a USB hub built in since we’re already connecting up a USB for OSD controls, and some other monitors at this price do offer the feature. If RGB and a excellent 1080p gaming is what you’re looking for, the MSI Optix MAG271VCR doesn’t disappoint, and makes a solid choice for your wishlist.