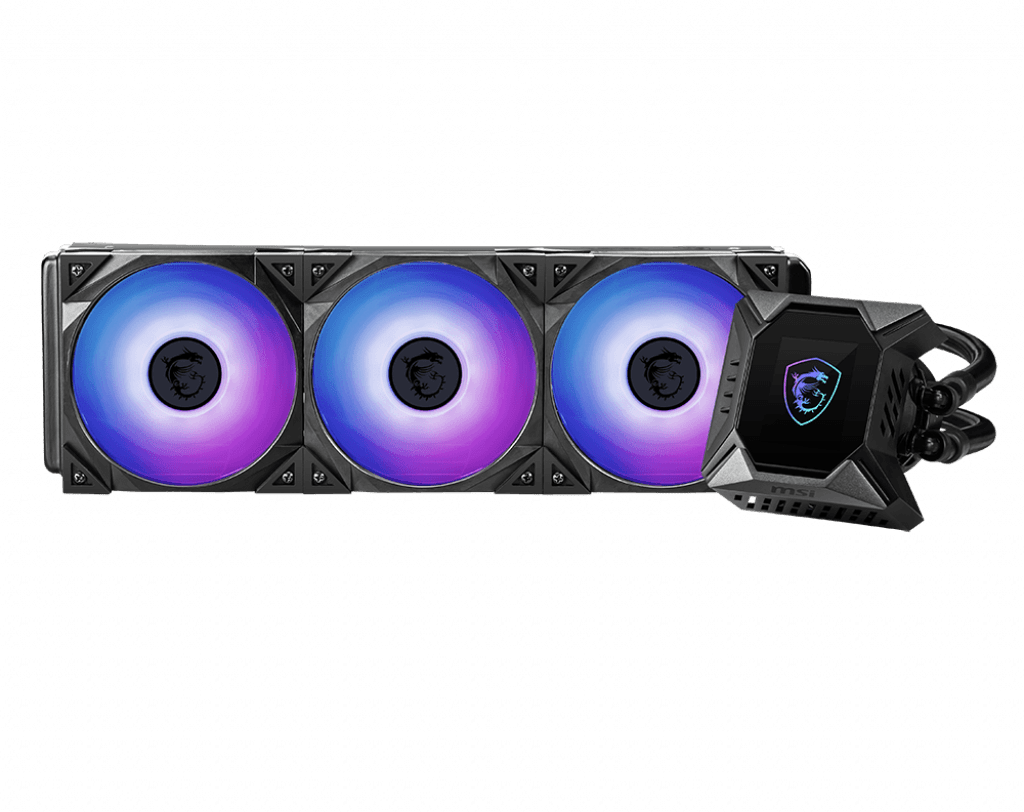 With previous generation Intel CPUs such as the i9-11900k or i9-10900k, a good cooler could handle up to 300w loads – but due to the increased thermal density of the 10nm++ Intel 7 manufacturing process (in comparison to the 14nm process), Alder Lake is much more difficult to cool in the highest wattage loads. For example, I haven’t found a cooler capable of keeping the i9-12900k under TJMax while running the OCCT Stress Test.

Today we’re looking another MSI CoreLiquid AIO – the K360. Being $50 cheaper than the s360, I expected it to perform worse than the S360. I was wrong – this cooler performed well beyond expectations, resulting in a lot more testing and retesting than I typically perform and some surprising results. Read on for more information.

The CoreLiquid K360 arrived in a large box, with molded cardboard and foam for protection.

The installation of this cooler on LGA 1700 is the same as the previously reviewed s360. As before, I will note that when installing the standoffs the unit felt insecure until fully assembled. This initially caused some anxiety as I worried that contact was not ideal – but those fears were unfounded as MSI’s CoreLiquid CPU Coolers have been the best performing coolers I have tested thus far with Intel’s i9-12900k.

Most liquid coolers have fans only on their radiators. The addition of a fan on the CPU block helps dissipate additional heat, and cools the surrounding components.

Each fan can be independently controlled to your preference for silence or maximum cooling. In the default cooling mode, the fans of the k360 will engage only as necessary – powering down fans when they aren’t needed.

As with the previously reviewed s360, the first thing that sets the k360 apart from other coolers is the integration of a miniature display. The k360 supports most of the same options as the S360 for display customization, but lacks the ability to display local weather.

The quality of the K360’s “LCD” display is downgraded compared to the monitor-like IPS display included with the s360. It has poor viewing angles, as such you will want to have the display directly facing you for ideal usage.

There’s more to a cooler than just it’s heat sink. The fans included have a huge impact on cooling performance and noise levels. When I finished my first round of testing of the K360, I was surprised by the results and initially attributed the curiously strong results to the stronger static pressure of the TORX Fan 4.0 – but there was more to the story.

The K360 has one feature the S360 lacks, as the K360’s fans are aRGB : lighting controls. The MSI Center’s Mystic Light plugin allows for easy control of the fan lighting. You can set the lighting independently, or synchronize it with other lighted devices in your computer such as RAM and the motherboard.

I personally liked the “CPU Temperature” setting, which changes the color of the lighting based on how hot your CPU is.

The initial results of the k360’s performance surprised me, and as a result I tested this product a little differently than others. In addition to the standard testing detailed below, I tested both MSI’s k360 and s360 with their default fans and with the fans of the other model.

For each cooler included in my results, I used the thermal paste provided by the manufacturer.

To test the limits of thermal capabilities, I have tested Cinebench with 3 TDP settings: no power limits, 200w, and 140w. OCCT includes only 200w and 140w results, because no cooler I have tested can keep the 12900k under TJMax if power limits are removed in this workload. I’ve also tested Cyberpunk 2077 and Assassin’s Creed : Odyssey results, as these are the most thermally demanding games I own.

Since all previously tested coolers – with the exception of MSI’s s360 CoreLiquid – have failed to prevent the i9-12900k from reaching TJMax while running Cinebench with power limits removed, that was the first thing I tested.

The K360 was able to keep the CPU well under TJMax in this scenario – in fact it beat our previously best test results by up to 7c! HWInfo reported that the CPU, which was installed in MSI’s z690 A Pro DDR4 motherboard, pulled up to 231.6w while Cinebench was running.

With the encouraging Cinebench results, I attempted to run OCCT without power limits. While the K360 is the best performing cooler we’ve tested with Intel’s 12900k yet, it also failed to keep the CPU under TJMax in this scenario. The CPU peaked at 270w of power consumption (according to HWInfo), before nearly instantly hitting TJmax and throttling.

In power limited scenarios, the k360 performed up to 6c better than our previous best test results.

Now some folks might scratch their heads when seeing gaming thermal results, but at stock settings the i9-12900k will use up to 123w of power consumption in Cyberpunk 2077- making it a realistic “real life” example of a medium intensity heatload. In these results the k360 performed essentially the same as the s360.

As a result of the unexpectedly strong results, I brought this to the attention of MSI and retested both K360 & S360 coolers, finding the same performance delta between the two models even after retesting.

Initially, I suspected that the impressive cooling performance of the K360 was due to it’s fans having a very strong 4.29 static pressure. To verify this, I tested both K360 & S360 with both the fans they came with – and then I swapped them with the other unit’s fans and retested again.

MSI’s testing determined that my s360 unit, which prior to this article was the best performing cooler I had tested, was actually performing below expectations and that the s360 should outperform the K360 in thermally demanding scenarios. This was certainly unexpected!

I don’t feel the equipment I currently have is sufficient to perform a proper loudness test, but I can give a quick overview.

In most loads the fans will operate at a fraction of their potential speed, and as such the noise levels are generally low. That being said, the fans included have 4.29 mmH20 static pressure and operate at up to 2500 RPMs. As such, they will get quite loud if operated at full speed – but that only happens in extreme thermal loads which push the CPU to TJMax such as OCCT.

Those who want to enforce silent operation can adjust the fan speeds manually in MSI’s Dragon Center. As shown earlier in this review, if the cooler is not under significant thermal load it will turn off the fans individually if they are not needed.