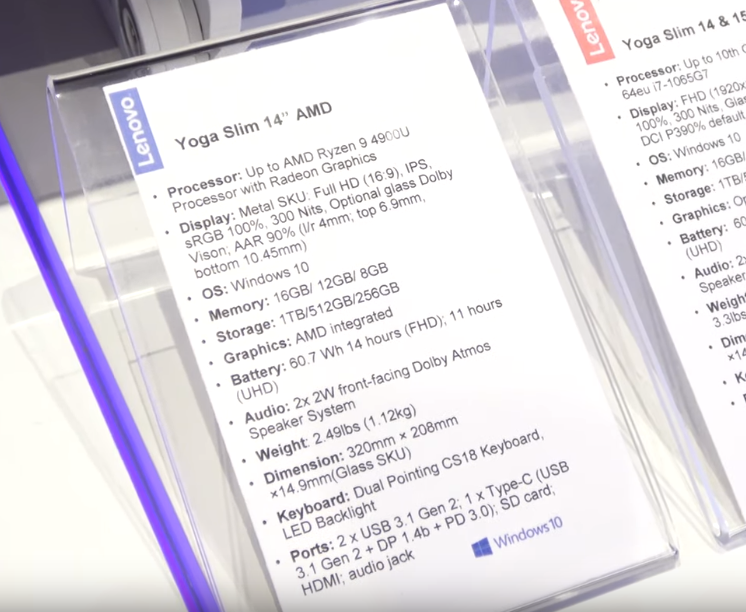 Today, a video published by Notebook Italia reveals a Ryzen APU SKU that AMD hasn’t yet revealed: the Ryzen 9 4900U. The video is basically a showcase of the new Yoga Slim 14 inch laptop with a Lenovo employee giving some commentary about the laptop’s features. Both the employee and a plaque with specifications unambiguously mention this Ryzen 9 4900U APU.

No hard specifications are given for the 4900U, but it is presumably an even faster version of the 4800U, with the same amount of CPU and GPU cores, but at a much faster speed while consuming the same amount of power or less. It might also be a similar concept to the 4800HS, which is exclusive to ASUS at the moment. Perhaps Lenovo got first dibs on the 4900U.

Currently, that’s about all we know about the 4900U, that it might exist. I say might, because this could be a simple marketing mix up. There seems to already be some incorrect marketing involving Ryzen 9 as can be seen on ASUS’s website for the G14 Zephyrus. Though the title mentions Ryzen 9, no Ryzen 9 CPU exists within the full list of possible specifications. This doesn’t mean that the 4900U doesn’t exist, of course; it’s just simply a good practice to wait and see. Perhaps AMD is just saving the 4900U so that they can get in another product announcement, as AMD always loves to do. We’ll just have to be patient on this one.