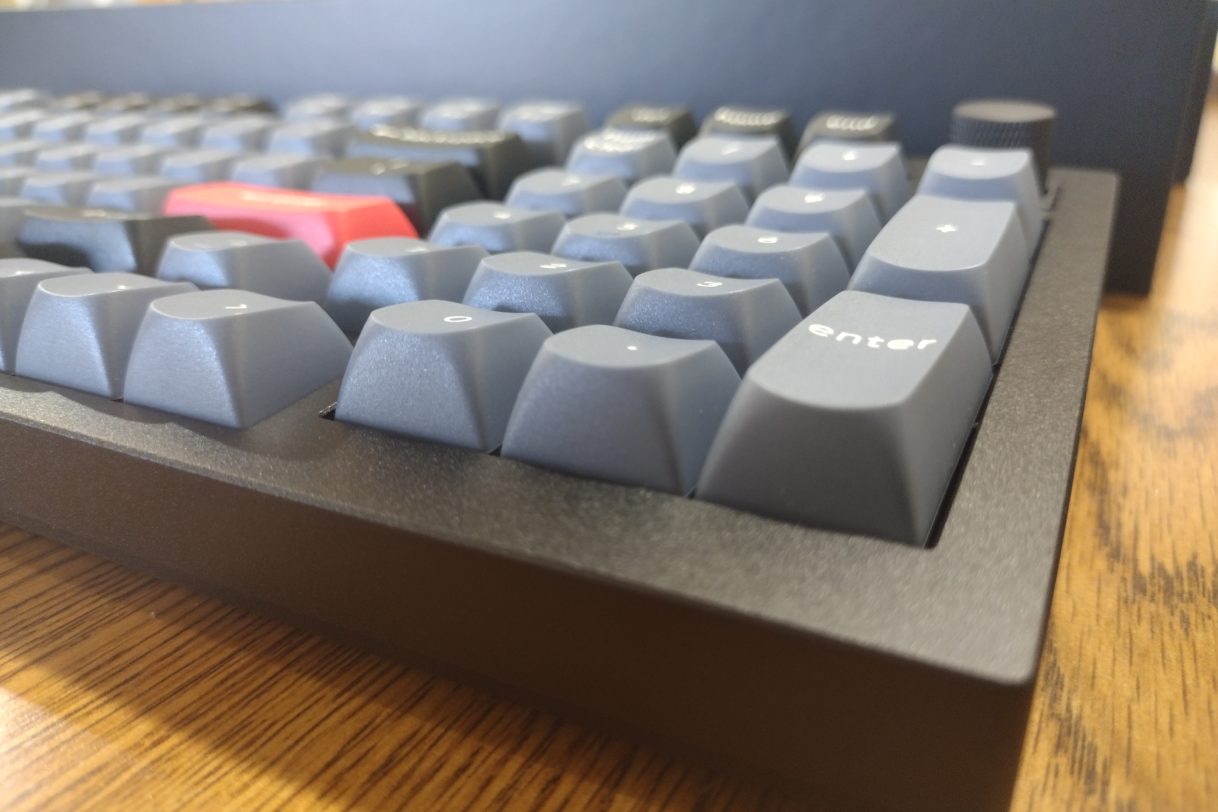 Since their initial launch, Keychron has become one of the most popular names in the mechanical keyboard community and are well known for their keyboards. Previous Keychron keyboards have been reduced size models, but with their latest Q5 & Q6 keyboards they finally offer a full size keyboard. While I love Keychron’s previous keyboards, I missed having a numpad for office work and while accessories like the previously reviewed QO numpad are nice – I still prefer having an integrated numpad.

With a MSRP of $195 for the fully assembled versions, the Q5 and Q6 are not “cheap” keyboards – these are aimed at enthusiasts. Like previous Keychron products, they come in a sturdy boxes, protected by molded padding on the inside and covered with a soft covering for protection.

What’s different from other keyboards?

Like previous Q-series keyboards the Q5 and Q6 are extremely sturdy, being comprised of an Aluminum body & Steel plate. This is not a lightweight keyboard – it weights over 5 pounds. If the zombie apocalypse happened and you didn’t have anything else to defend yourself with, the Q5 or Q6 would come in quite handy. The included keycaps are double-shot OSA PBT.

When I tested the Q3, I said it was “Truthfully, this is the quietest keyboard that I have personally tested.” Below is a recording of a typing test on Keychron’s Q3. I didn’t record another typing test because as far as I can tell, the sound generated by the Q3, Q5, and Q6 is identical.

This unit came with Gateron Pro Brown switches, the sound of typing will vary depending on switch type used. For those wanting a more in-depth sound comparison, Keychron has uploaded a video to YouTube showing their own recording of the Q6 while typing shown below.

I don’t claim to be an expert on mechanical keyboards, I can only talk about my experience with the keyboard as I use it. For these keyboard reviews, I use the products at my day job which involves a lot of typing, and use the boards exclusively for 1-2 weeks to get a proper feel of how the unit performs. While testing I used all of these keyboards with a wrist rest – but the Q5/Q6 does not come with one by default.

The following is my subjective view on how Keychron’s Q5/6 with Gateron Pro Reds compares to MSI’s VIGOR GK71 SONIC and Keychron’s previous Q1 & Q3 keyboard.

The keys on Keychron’s Q3 with Gateron Pro Browns land nearly as fast, but the landing is softer. While it’s still possible to mash your fingers with the Q3 + Browns, I barely had to adjust my default typing style to avoid doing so. When it comes to noise levels, the Q3 is even quieter than MSI’s GK71 – it is the quietest mechanical keyboard that I’ve had the pleasure of testing. The Q1, in comparison, was louder and easier to mash fingertips on. My typing levels are fast when using the brown style switches, but a little bit slower than when using red style switches.

The experience using Keychron’s Q5 & Q6 was identical to that of using the Q3, except as I was using Red switches I was able to type slightly faster than when using the Q3 with Brown switches. However, I had difficulty adjusting to the reduced size zero key on the Q5’s numpad. As the Q6 has a “normal” zero key on it’s numpad, it did not suffer from this issue.

Keychron has improved it’s Q series keyboards over time – making improvements based on community feedback. The Q5 and Q6 are strongly built, comfortable to use, and they’re fairly quiet. Open source software support means you can make adjustments to lighting settings (and more) without proprietary bloatware.

These are the quietest keyboards that I have personally tested, that combined with a built-in numpad makes the Q5 & Q6 ideal for office work – these models are also very comfortable to type on, even for long periods of time unlike other mechanical keyboards which can give you finger strain if you mash your fingertips for too long. The build quality is phenomenal and extremely sturdy, like that of a steel baseball bat.

Keychron’s Q5 and Q6 keyboards aren’t cheap, but they’re quality is top notch and I would highly recommend them, especially to those looking to try their first fully custom mechanical keyboard

If you’re interested in learning more about Keychron’s Q5 & Q6, check out the YouTube video below or Keychron.com for more information.