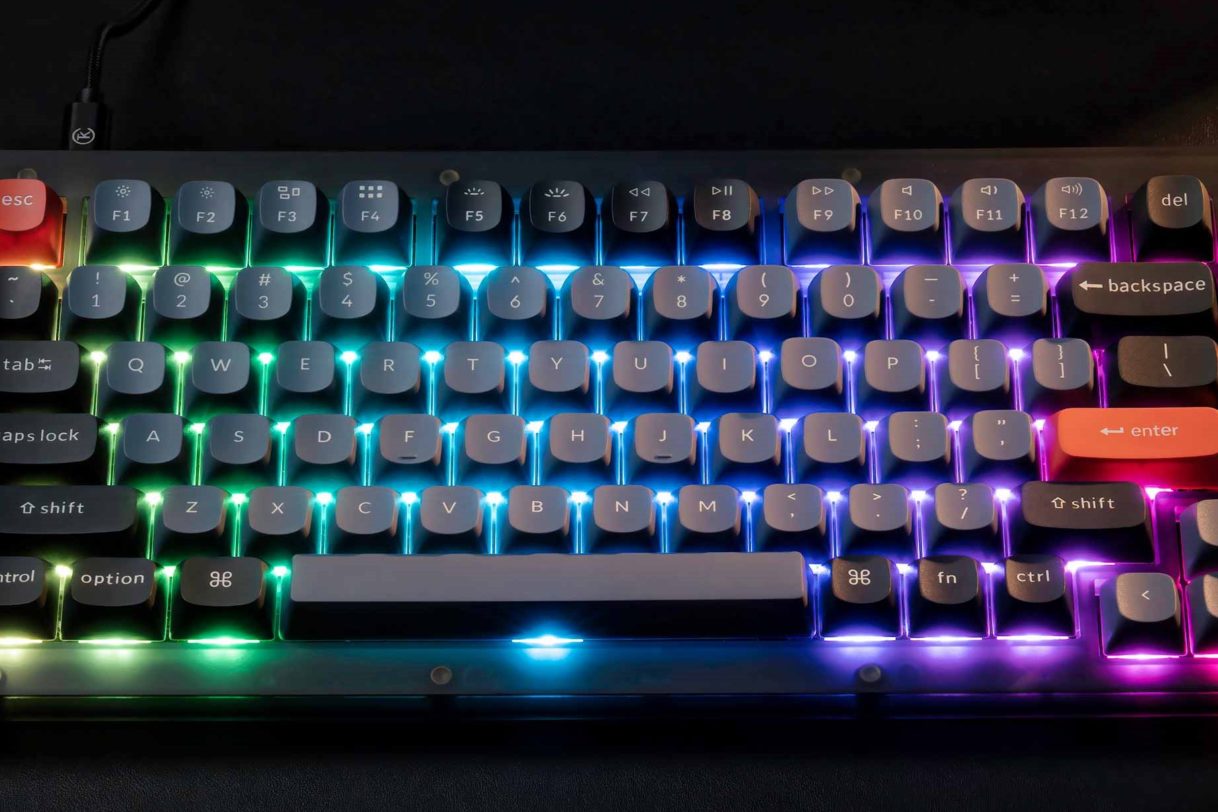 Like previous Keychron products, they come in a sturdy boxes, protected by molded padding on the inside and covered with a soft covering for protection.

Features of the V1

Unlike Keychron’s Q series boards which can be used to fight the zombie apocalypse due to how strong, heavy, and sturdy they are – the V1 in contrast uses a ABS shell which reduces it’s weight considerably and makes it less ideal to use as a weapon in case of zombie apocalypse.

Two versions of the V1 exist, one of them includes a knob for volume control.

The V1 supports double pop-out legs allowing you to set the keyboard at 3 angles in total – Flat, low height, and mid-height.

This unit came with Gateron Pro switches, the sound of typing will vary depending on switch type used. For those wanting a more in-depth sound comparison, Keychron has uploaded a video to YouTube showing their own recording of the V1 while typing shown below.

I don’t claim to be an expert on mechanical keyboards, I can only talk about my experience with the keyboard as I use it. For these keyboard reviews, I use the products at my day job which involves a lot of typing, and use the boards exclusively for 1-2 weeks to get a proper feel of how the unit performs. While testing I used all of these keyboards with a wrist rest – but the Q5/Q6 does not come with one by default.

The following is my subjective view on how Keychron’s V1 compares to other keyboards, including Keychron’s previously released K8.

The keys on Keychron’s K8 with Gateron Reds land fast and hard, and extended typing sessions will cause fingertip strain if you don’t type lightly. Keychron’s V1 is similar – it’s best to type lightly on the keyboard to avoid fingertip strain, but for those with lead fingers the landing is somewhat softer than the K8’s – resulting in slightly less wear on your fingers.

I prefer this keyboard to Keychron’s previous offering of this level, the K8, because it has a slightly softer sound profile and a softer landing on keypresses. It’s also a bit cheaper than the K8 was. If you’re looking for an entry level mechanical keyboard that doesn’t break the bank, the new V1 works well.

If you’re interested in learning more about Keychron’s V1, check out the YouTube review embedded below from Hardware Canucks or Keychron.com for more information.