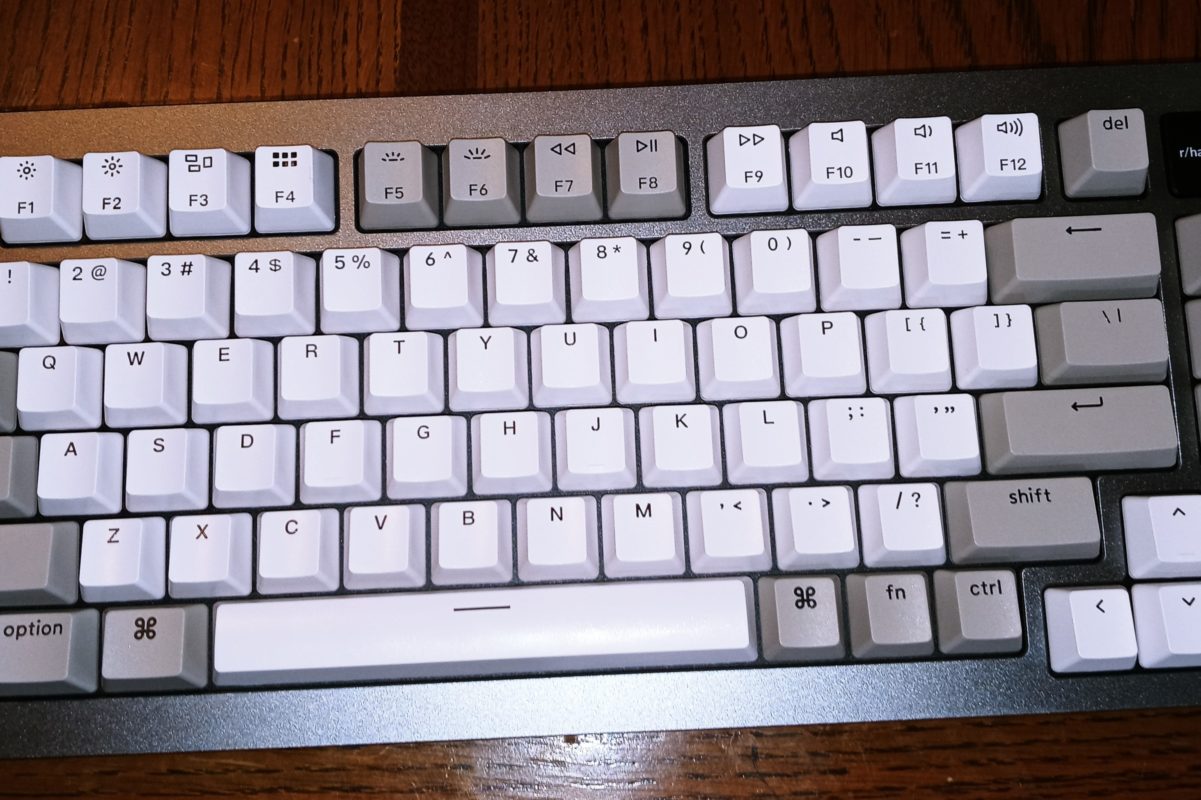 Keychron started as a Kickstarter project under the name of Keytron a few years ago (the name changed due to legal issues), formed by a group of 3 keyboard enthusiasts with experience in the industry after they had a conversation regarding things they didn’t like with existing mechanical keyboards. Their initial Kickstarter project was a wild success, raising nearly $330,000 (USD). Keychron is one of the few companies that make keyboards that are both wireless and mechanical with Mac users in mind.

Today Keychron launches their newest offering, the Q1 QMK Mechanical Keyboard. It’s an extremely sturdy unit made out of CNC Aluminum, and is fully customizable with open-source QMK firmware. Before I go on and give you my thoughts, lets take a look at what comes with this keyboard.

The Q1 is very solid and has decent mass, weighing heavier than any other keyboard I have used at 1600 grams (3.5lbs). It is also the sturdiest keyboard I have ever used. I’m half-joking (but half-serious!) when I say you could use this keyboard as a weapon. Really, it’s built that well. My one “complaint” about this unit’s design is that it does not have height-adjustable legs – but this didn’t really bug me while using the keyboard.

Compared to the previously reviewed Keychron K8, the Q1 QMK keyboard is somewhat silent (for a mechanical keyboard). With the Keychron K8 I used Gateron Reds switches, which are said to be their quieter than the Blues or Browns. However, in my testing the Q1 QMK was much quieter than the K8 despite using the louder brown switches.

Below is a recording showing the loudness of both keyboards.

As my review unit came pre-built, installing the Keychron Q1 was simple – simply plug in the cord to the keyboard and computer. However, if you order the barebone version you’ll need to put it together yourself. Setting up the keyboard manually should be fairly easy, but I haven’t had the pleasure of taking it apart and putting it back together because I misplaced my allen wrench.

As its name implies, the Q1 QMK can be programmed through QMK firmware and the VIA software. You can remap keys, add shortcuts and macros, or even change the keyboard’s lighting settings. Keychron has uploaded a video showing this in action, which you can see below.

I’m not an expert on mechanical keyboards, so for this comparison I spent a lot of time doing the same tasks on both this keyboard, the Roccat 121 AIMO, Keychron K8. My day job involves a lot of typing, as such I had plenty of opportunities to test the Q1 QMK thoroughly – while testing I used all of these keyboards with a wrist rest . Recently I’ve been using the Roccat 121 AIMO for office work, and the Keychron K8 for my gaming rig.

The keys on the Roccat 121 AIMO land softly, making it ideal for extended typing sessions – but my typing speeds were slightly slower while using it compared to the Keychron keyboards. The keys on the Keychron K8 with Gateron Reds landed hard and fast, with the slightest of resistance as they fall. I had to adjust my typing to be lighter with the K8 or my fingers would hurt a little bit, as when I typed heavily the tips of my fingers were impacted somewhat – something I didn’t experience with the Roccat 121 AIMO.

I really liked testing Keychron’s Q1 QMK – it has replaced the Roccat 121 AIMO as my office keyboard. It’s build quality is top notch, sturdier than any other keyboard I have used previously. The QMK open source customization is very nice, allowing customization in pretty much any way you could imagine. Finally, it is fairly quiet for a mechanical keyboard – so you won’t wake up someone who is sleeping when you’re typing.