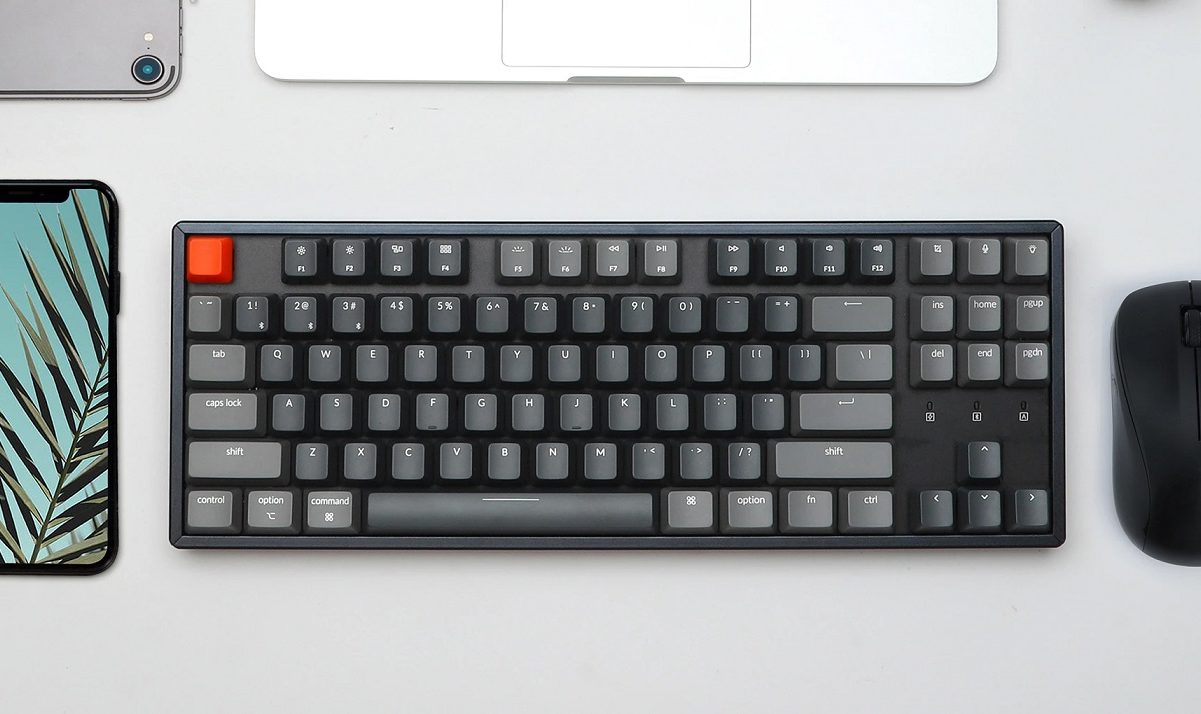 Keychron started as a Kickstarter project under the name of Keytron a few years ago (the name changed due to legal issues), formed by a group of 3 keyboard enthusiasts with experience in the industry after they had a conversation regarding complaints they had with existing mechanical keyboards. Their initial Kickstarter project was a wild success, raising nearly $330,000 (USD). Keychron is one of the few companies that make keyboards that are both wireless and mechanical with Mac users in mind. They specialize in minimalist keyboards, and the Keychron K8 is the largest keyboard they have created thus far. How does it compare to other keyboards? Here’s our review.

Setting up the Keychron K8 was simple, it arrived with it’s battery charged. To turn on Bluetooth I used the function key + the “1” key to pair it with my computer, and then function key + 2 to pair it to my phone.

The keyboard’s default keys are for MacOS, but it comes with alternative keys for Windows users. It also includes grey and orange lighting and escape keys. Alphanumeric keys and arrow keys are light grey, most other keys are dark grey.

I’m not an expert on mechanical keyboards, so for this comparison I spent a lot of time doing the same tasks on both this keyboard, the Roccat 121 AIMO, and the Nixeus Moda v2 (with Cherry MX Blues). Initially I was worried that I made a mistake in choosing the Red switches for the K8, as I had previously used a friend’s keyboard with ultra-silent reds and I didn’t like them.

My day job involves a lot of typing, as such I had plenty of opportunities to test both keyboards thoroughly. I had originally used a Roccat 121 AIMO for work, but later switched to the Nixeus Moda v2 because I was able to type faster on it. However, it was less comfortable to type with – especially during extended use.

The keys land fast and hard on the Moda v2 when typing, this results in some strain over extended usage in a work environment. The keys on the Keychron k8 also land fast, but they have a slight resistance and a somewhat softer landing when typing. The keys on the Roccat 121 AIMO land softly, but I was not able to type as quickly using this keyboard. During testing I used all of the keyboards with a wrist wrest. I was able to type just as fast on the k8 (compared to the Moda v2), but without any strain even throughout a 10 hour shift. I had to learn to type more lightly with both the Nixeus and Keychron models, as when I typed heavily the tips of my fingers were impacted somewhat – something I didn’t experience with the Roccat 121 AIMO.

Typing on the keys of both the Keychron and Nixeus models are audible. The Moda v2’s MX Blues produced a slightly louder and sharper sound, in contrast the Gateron Reds on the Keychron k8 were slightly softer and quieter – but not by much.

N-key rollover is supported in the K8’s wired mode, which means all keystrokes detected at the same time will be detected. In wireless mode, it supports up to 6 (+ Control/Alt/Function) simultaneous keystrokes. The K8 also has keys for taking screenshots and summoning Siri (or Cortana if you’re using Windows).

I tested Bluetooth with both my phone and my computer, up to 20 feet from the device it was connected to. In my testing, it worked well without any discernible lag. The Keychron K8 has a variety of RGB lighting effects available. If you don’t like RGB, you can turn off the lighting or change the effects to a single color (or purchase the model without RGB). It would be difficult to show all of the various effects available in this article, so I made a video showing these effects instead.

I was originally worried I might not like this keyboard, as the only other keyboard I had used with “reds” I did not like. Turns out, I had nothing to worry about. In fact, I use it for all of my office work now. It’s very comfortable to use even while working long shifts. I will continue to use the Nixeus Moda v2 for gaming, as its keys are a bit quicker for “latency” sensitive typing.

My only “complaint” about the Keychron k8 keyboard is the lack of a 10-key – as I’m used to using the keypad for office work. However they will be releasing a full-sized keyboard called the K10 in 2021. The Keychron K8 is currently available on Amazon for $74.99