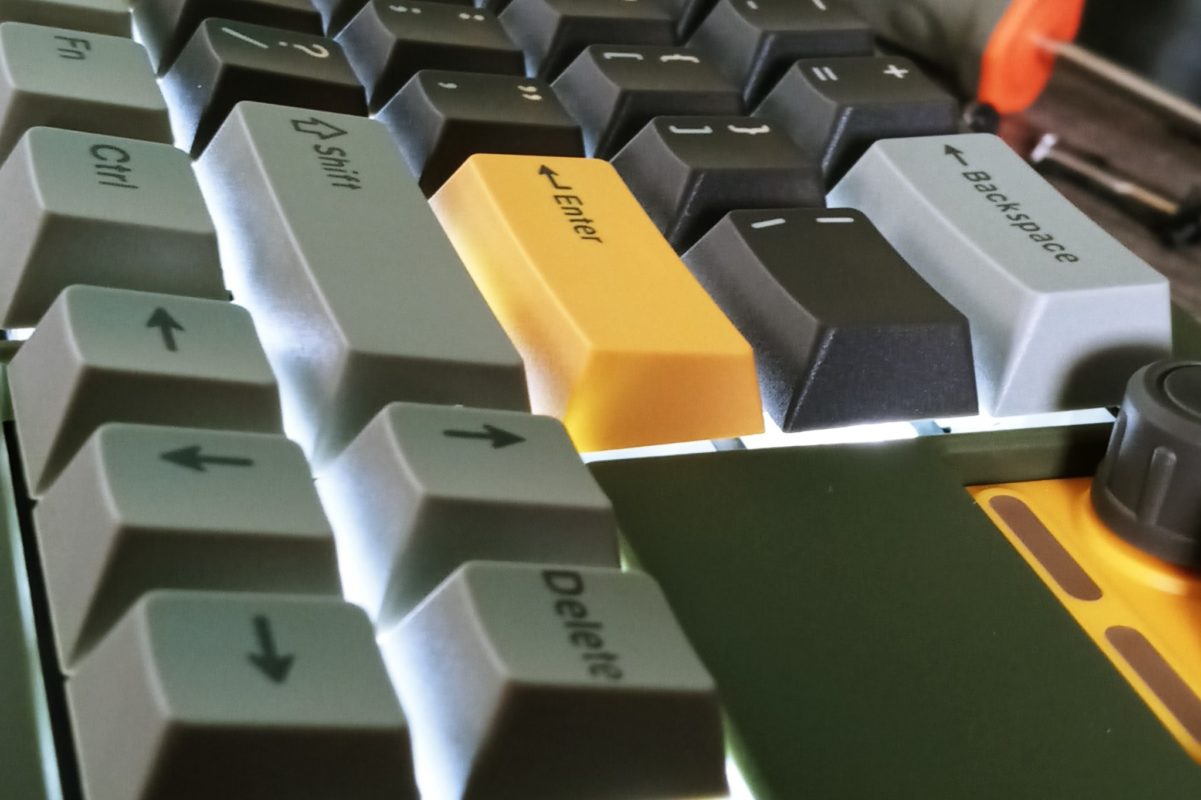 Today we’ll be looking at a new keyboard from Shurikey, which is a name most of y’all are probably not familiar with. This is a new keyboard manufacturer, and their debut product is the Shurikey HANZO – a 62% mechanical keyboard.

The Hanzo comes with your choice of 4 Varmilo switches – Daisy, Sakura, Rose, or Ivy switches. Our review sample came with the Ivy switches. Varmilo’s switches are a little bit different than normal switches, as they are “Electrostatic Capacitive” switches – which means that rather than triggering a physical switch upon contact, the keypress is registered by an electric field. In theory, this means that the Varmilo switches will have a much longer lifespan when compared to typical switches.

The only downside to using these switches is that they are electrically incompatible with other switches, so you can’t replace these with another type.

For connectivity, the HANZO supports both USB-C and Bluetooth 5.0 connections. The keys themselves are double-shot keycaps.

What’s in the Box

The HANZO comes in 3 primary styles, shown below:

Each of these styles can be further customized, as it comes with 2 detachable top covers. You can use either included cover, or use the keyboard without a cover installed. Examples:

For those interested, here’s a short video showing the installation of the cover

Despite being mostly plastic, the Hanzo is sturdy and well-built. Applying strong pressure to the unit results in a slight bend, but nothing worth worrying about. Just like Keychron’s Q1, you could probably use this as a weapon – although it wouldn’t last quite as long.

The HANZO does not support RGB effects, but it comes with a white backlight. The brightness of the backlight can be controlled with the left-side control knob, or turned off by clicking the knob.

I’m not an expert on mechanical keyboards, so for this comparison I spent a lot of time doing the same tasks on both this keyboard and others. My day job involves a lot of typing, as such I had plenty of opportunities to test Shurikey’s HANZO thoroughly.

I tested this keyboard both with, and without, a wrist wrest. While I’ve preferred to use a wrist wrest with most other keyboards I’ve used, with the Hanzo I felt it was more comfortable without using one.

Bluetooth was tested up to 20 feet away with a PC and and an Android Tablet, both of which worked well without any lag or connection issues.

While this wasn’t the loudest mechanical keyboard I’ve tested, it wasn’t exactly quiet either. Below is a typing test to show you it’s loudness levels.

Originally I was worried that the lack of F keys would be an annoyance, but I quickly adjusted to typing without them. The HANZO allowed for quick typing, and unlike other keyboards didn’t cause my fingertips to feel like they had taken a beating after extended usage. I genuinely like this tiny keyboard – it’s now the keyboard I use while working at the office.

If this is a keyboard that interests you, the Shurikey HANZO is available tomorrow for a launch price of $99 USD on Shurikey’s IndieGoGo page. They also have a Discord server if you have any questions about their keyboard, and you can also catch them on Instagram or Twitter.