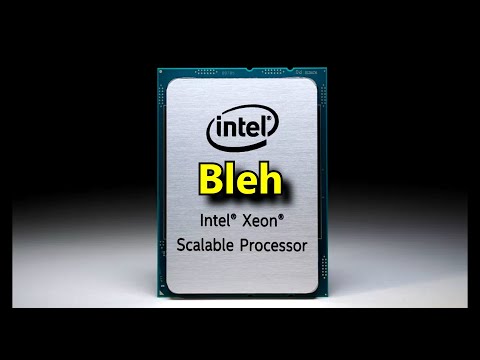 Alright how’s it goin’? In the last video I talked about AMD’s future 5nm, 128-core Zen4 Genoa product. But the information in that video didn’t actually come from AMD insiders, but from sources from within Intel and it was afterwards that I got double-confirmation that this 128-core Genoa Zen4 exists. But with the info coming from inside of Intel, you might think that the information I received was actually more centered around Intel products than AMD’s; and it was.

So today, in this video, I’ll let you know what I know about Intel’s delayed Sapphire Rapids, and a bit more about what comes later. And, typical of Intel these…years, the news isn’t particularly good. Before I do that though, just let me say that in the previous video, when I claimed that we had exclusively leaked 56-cores and HBM with Sapphire Rapids last October, it turns out that I jumped the gun on that particular combination. Tom from Moore’s Law is Dead channel actually had that info some time before us, and has shared this screenshot with me as proof. After some discussion, and checking my sources, I can confirm that Tom did have the earlier info, at least as far as these 56-cores and the HBM2e.

We did have the tile info; that is four tiles of 15 cores with one disabled core per tile. We had that first and Tom later got that information confirmed by his sources, I believe. And that’s just how it is in this game: the earlier your info is, the less complete it can be, because some stuff does change. So also keep that in mind while you watch this video. And now, on with the info.

Ok, so first up we have this slide that I showed in the first video. I actually hid something on it, and I was surprised that nobody in the comments noted that. The hidden info was the die size of the Sapphire Rapids tile. We can see four tiles, and the reason I hid it? It’s big. How big is it? It’s 372mm2 of big. Per tile! With 4 tiles in the product, and remember this is a 10nm++ die. 372 square millimeters? Is clearly a large die for Intel on 10nm, and the top-end product requires four of each for a total area of 1488mm2. AMD on the other hand have eight very small chiplets and a larger IO die on the older process. And remember, these Milan CCDs are from the same design as the Ryzen 5000 CCDs, so they’re 80.7mm2 and obviously in the case of EPYC you need to multiply that by eight, which is a total of 648mm2 of silicon. And I can not find the exact dimensions of the EPYC Zen3 IO die yet, but [chuckles] I know that it is nowhere near this remainder.

And with these larger Sapphire Rapids dies scaling worse on each [process node], AMD’s real chiplet solution is just vastly better, economically. Probably even more than twice as good, but that’s the economical part of it. Perhaps Intel has performance advantages? Well, they certainly believe so.

Recall from the previous video this benchmark that Intel showed of Sapphire Rapids vs Genoa. This is verses Genoa 96-core version, and this was also the slide which first told me that there was a 128-core coming. And it is quite clear that it’s not looking good for Sapphire Rapids, even verses the 96-core version of Genoa. I don’t think anybody will be surprised by this, as certainly under these types of loads: the more cores you have the better and there’s an enormous difference between 56 and 96.

However, there was another slide in this deck that showed a comparison between Sapphire Rapids and Milan. And Intel were being bold about their performance. “Sapphire Rapids claims performance leadership.” Again, as with the Genoa slide, we see seven different benchmarks for Integer Compute, Floating Point, Networking, Analytics, Web Infrastructure, AI, and HPC. The majority of these benchmarks are probably from SPEC: the Standard Performance Evaluation Corporation. Or at least, they really ought to have been, but we’ll see about that…

Now in a lot of cases, just raw integer compute and floating point performance still rules the roost. And, what has to be a surprise here, Intel are now claiming about parity in integer…that looks about equal to me, but also a small lead in floating point performance. Now, obviously I’ve been out of the loop a little bit, so I’m not sure if this is what the expectation was or not, but we know that Zen is very powerful in floating point especially, so to see Intel take the lead here is a surprise to me at any rate. And while I said “small lead,” that could be in fact about 15%, again according to Intel. But what’s really interesting about both these integer and floating point numbers is it’s coming at the core deficit, 56 cores vs 64. Yeah, alright, the Intel solution is a bit more hefty on the power requirement [350W vs Milan’s 280W], but still 56 cores vs 64 and these kind of leads? That’s a bit of a turnaround there; if it’s true. And again, these benchmarks like the Integer Compute and Floating Point really ought to have been run SPEC’s INT rate and FP rate benchmarks, which are multithreaded. Their throughput benchmarks. And so we could be looking at either an IPC or clockspeed improvement for Intel over Milan. Now, regarding Analytics and Web Infrastructure, the lead looks to be around 20%, and they’re also claiming a huge 50% lead in AI, HPC, and Networking. But as with the previous video, I shouldn’t need to tell anyone that these are Intel benchmark estimates of unreleased products, and there may well be an element of wishful thinking and cherry-picking involved.

So again, forgive me as I’m just getting up to speed on some stuff I’ve missed during 2021. I stopped following tech entirely since last October, and therefore missed that Intel announced, right at the end of May, that Sapphire Rapids was delayed from late 2021 to the first half of 2022. From previous examples we’ve seen, from all companies not just Intel, it’s normally prudent to analyze “first half” as “second quarter” and probably late in that quarter. What’s sad about this is that only a few days previous this information being outed at Computex, Intel believed they had an opportunity to retake the performance lead with SPR. You’ve just seen their own benchmarks where they were claiming a pretty strong performance lead over Milan. And now here’s another slice of the roadmap I showed you one or two small snippets of in the previous video:

As we can see, had Intel achieved their goal of a late 2021 release of Sapphire Rapids, they would have had a gap of around about six months until AMD released Genoa. And they did see that as their opportunity to regain that lead. But now with a first half 2022 release, that’s coming very, very close to AMD’s Genoa. And rather than having enjoyed a six months lead, they’re just gonna be basically back into the position that they are in now, if not worse. And remember, this is with their version of chiplets, these “tiles,” which they should have started working on back in 2017; basically as soon as AMD had launched Zen1. Which, incidentally, will be five years old early next year.

And if we look at the Intel roadmap from the investor meeting 2019, they have already slipped one year from this. This “5 to 7 quarter cadence” that they claimed they had, moving to “4 to 5” never happened. In fact, it got worse, and it gets even worse.

Emerald Rapids, which we exclusively revealed as existing months ago [Nov 20, 2020], is coming next. And it looks likely to be a woefully inadequate part, with it’s mere 64 cores, which will be incapable of even slightly bothering Genoa’s 128 [cores], and will likely end up getting crushed by whatever AMD brings next. Emerald Rapids, as you can see, comes very late in 2022, but this is wishful thinking, and the past few minutes of your life watching this video will have proven that. Remember this roadmap was just before Intel announced the Sapphire Rapids delay from late 2021, and delays tend to knock on to more delays, as things get pushed forward. And now Emerald Rapids is very likely to be a first half 2023 product for Intel.

And it never rains, but it pours, on Intel’s Xeon line-up, because not only is Emerald Rapids this woefully inadequate 64 core part, and very likely coming later than Intel anticipated, it’s also still stuck on their badly-yielding 10nm node. That’s what all these green boxes mean: Intel 10nm. So no, it’s not going to be 7[nm]. Still 10nm for their premium datacenter product; in 2023.

There’s a reason their CEO Pat Gelsinger recently said that the 2023 roadmap is what it is and Intel are now firmly focusing on 2024, just like they were on 2021, 2022, and 2023. And with every delay and every push-out product, the gap just widens. And it’s not like AMD are exactly fighting on all cylinders, but they’re still pulling further ahead, even with their own delays and supply problems.

But, right, I’m done with this one. Nice and concise and it feels like I can relax and enjoy life a little while making videos, unlike before when the channel consumed all of my time. As for what this Emerald Rapids could be, I’ll speculate a little on that in an upcoming Patreon video while also taking a look at what 128 cores for Zen4 might mean.