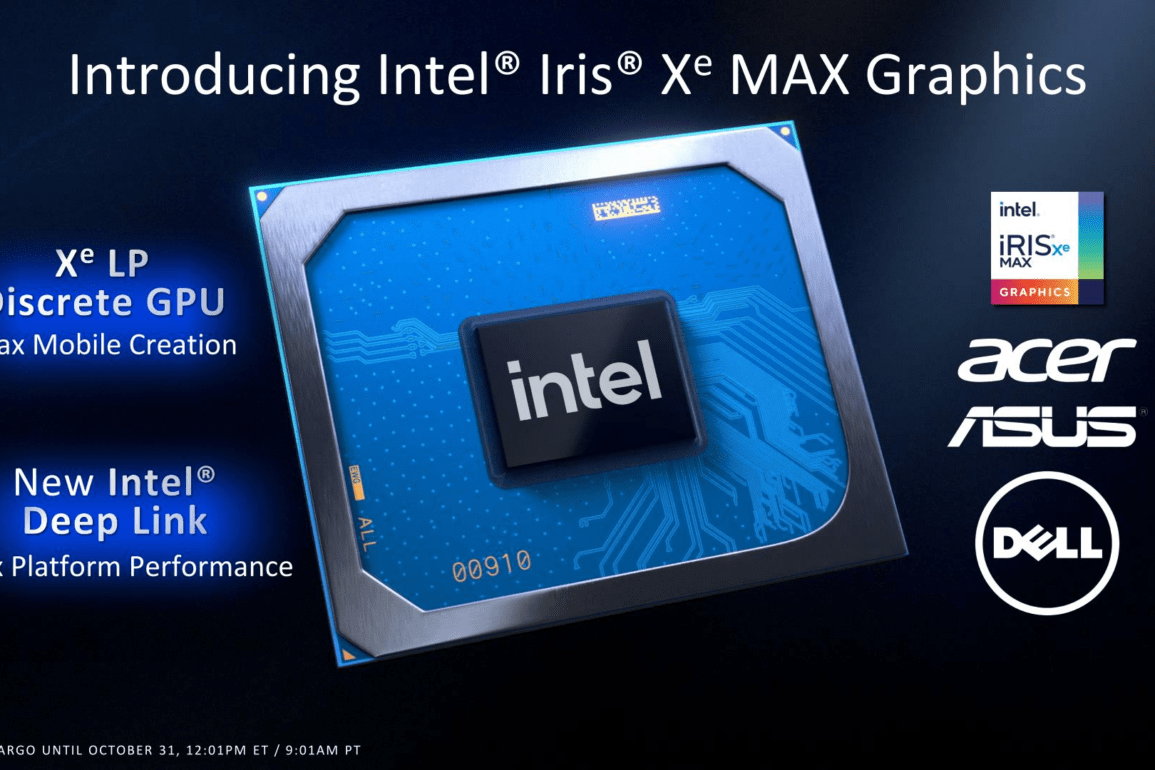 Today Intel is finally launching their Iris Max GPU, based on what was originally named as DG1. Iris Max is basically a discrete port of their Tiger Lake Xe LP integrated graphics; in fact, Iris Max is so identical to the Tiger Lake iGPU that it still uses LPDDR4X for VRAM because Intel didn’t even put a GDDR6 bus on the chip. Anyways, the specs:

The only real benefit Iris Max seems to have is the increased TDP and thus clock speed, but it’s still bottlenecked by its LPDDR4X memory; additionally, Xe LP was originally designed for integrated solutions as Gen 12 graphics, meaning disproportionally more power is being used for middling performance gains. As a product, it’s hard to understand what or who Iris Max is for.

When it comes to gaming, a market where Iris Max could have made a difference, the results are disappointing. It just barely edges out Nvidia’s MX350 (which is just a rebranded GTX 1050 from 2016) overall. Keep in mind this is on Intel’s seemingly fixed 10nm process. Intel didn’t provide any power consumption figures but maybe that’s where Intel is truly competitive? I think Intel should reveal those figures because my opinion on this performance would be very different if it was running at much lower power.

Like I mentioned before, AI is something Intel is really promoting with Iris Max, as was the case with Tiger Lake. But it’s such a niche use for a processor that is increasingly being used in everything from gaming to rendering to streaming and so on. It’s really difficult to sell a GPU just based on one feature; at the very least, somebody in the world is sure to appreciate this level of performance. I just don’t think it’s relevant for a wider audience.

Intel is also promising wickedly fast encoding performance but right now it’s just in “proof of concept” territory. So we’ll have to see if that turns out the way Intel says it will, and if it does, whether or not it really makes a difference. You can see on the graph that Iris Max, depending on the GPU count, can get anywhere from 80 to almost 160 FPS but I’m not entirely sure if that’s overkill or not. It is undeniably fast, however.

Finally, it is featured in three laptops coming next month. Now this is three times the amount of laptops I expected but it’s still a fairly meagre amount. Additionally, these are all mid range or even budget looking offerings; it certainly seems like Intel is giving OEMs a big discount on the Iris Max GPU and/or the Tiger Lake CPUs that are paired. It’s entirely possible that more laptops using Iris Max are on the way but I’m skeptical.

So, Iris Max. It looks pretty bad. But I will give Intel a break because it’s really only bad because it’s just a port of their integrated graphics. If they designed a low power mobile dGPU from the ground up I’m sure it would be far, far better. The issue with Xe right now it’s taking already existing projects and trying to make them into products that they were never meant to be, and this is a problem that is plaguing Iris Max and will plague the Xe HP GPU Arctic Sound. My hopes are much greater for DG2 and Ponte Vecchio, especially because they are fabbed at external foundries, most likely TSMC.

By the way, thanks to Anandtech for publishing the slide deck that Intel for some reason didn’t send us, despite our year long coverage of DG1 (how weird). Go read their coverage here.