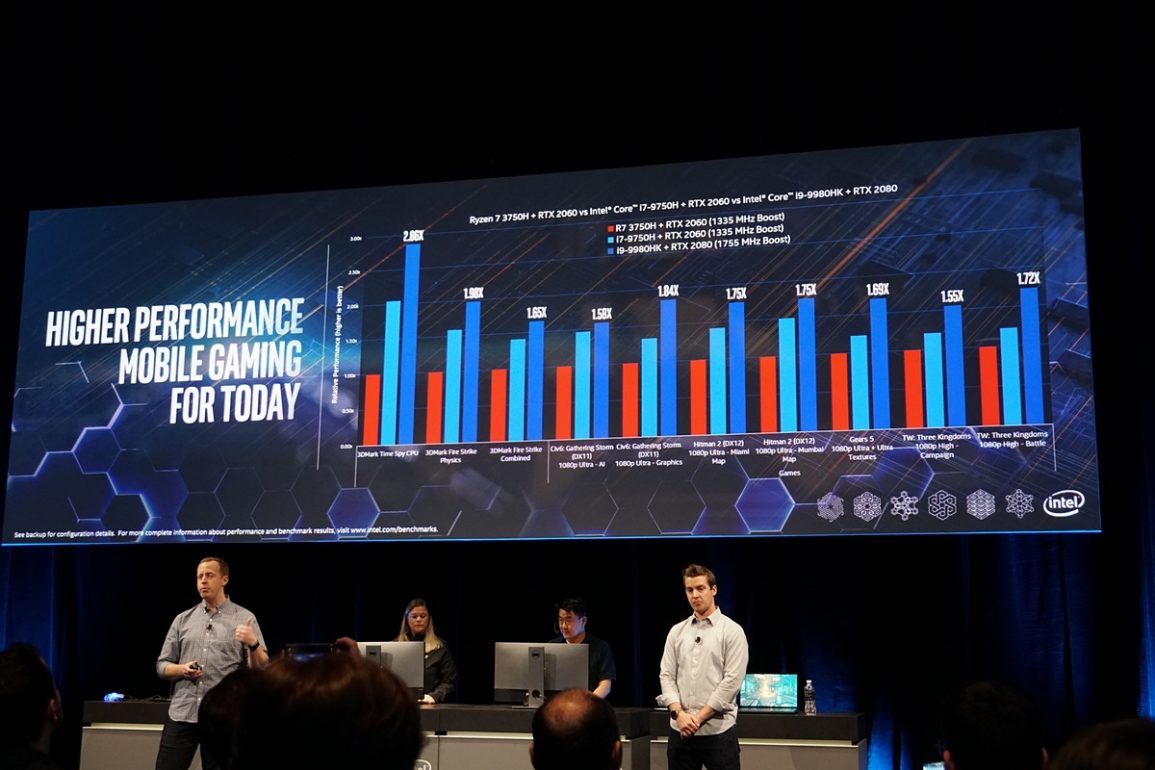 Update: Response from Ryan Shrout, who gave the presentation, has been added, along with additional context.

Prior to its CES presentation, Intel has already started showing off some new marketing materials and slides. Intel, of course, does want people to get excited for what they have to show us today and for the rest of CES. However, one slide in particular shows Intel claiming they have “higher performance mobile gaming for today [than AMD]” and to prove that claim they benchmarked a Ryzen 3750H equipped with an RTX 2060 against a Core i9-9980HK equipped with an RTX 2080.

Obviously, this isn’t a fair benchmark since a 2080 is much faster than a 2060, so it’s expected that the 9980HK laptop would be much faster than the 3750H laptop. Since the AMD laptop was only equipped with a 2060, it was much more limited by the power of the GPU than the Intel laptop. This kind of marketing from Intel isn’t surprising given what we’ve seen from them in the past. Previously, Intel was lambasted by several HPC and data center focused journalists when Intel tried to claim that the dual die Cascade Lake AP Xeons were faster than AMD’s Epyc Rome. Last month, Jim covered this episode and similar ones where Intel was found to be producing very misleading marketing materials.

No marketing from any company, be it AMD or Nvidia or Intel, should be taken at face value. Every company always wants to show its strengths and ignore weaknesses. But, it has to be noted that Intel’s recent behavior is unprecedented. Not in recent memory have we seen a benchmark from AMD that hamstrung Intel CPUs with a weaker GPU, or a benchmark from Nvidia testing AMD GPUs on a motherboard and CPU that wasn’t good enough. To be fair to Intel, they did also benchmark a third Intel laptop that had a 2060, not a 2080, but it’s hard to really give Intel the benefit of the doubt that both the AMD and Intel laptops had equivalent sustained GPU clock speeds. The results on the Intel 2060 equipped laptop actually seem within the realm of possibility, but can we really trust these figures at all?

The point was that the 9980HK + 2080 data point represents the pinnacle of mobile gaming performance AND that you can’t even buy an AMD platform today with that class of GPU. It’s spelled out clearly visually, not hiding anything, and the story was clear in person.

The point is clearly understandable, but without that context (which is not on the slide in question) it’s still misleading and even with the context it’s just a pointless benchmark. Intel still could have shown just the two 2060 equipped laptops, which they did in the previous slide before adding the 2080 system; had the 2080 system not been added, nothing would have been wrong. Whatever the additional context is, it’s just not possible to justify using a system with vastly superior specifications other than the tested part. Furthermore, Intel’s slide doesn’t even comply with the FTC’s ruling that Intel must disclose that the benchmarks it uses may be optimized specifically for Intel hardware and might run suboptimally on its competitors’ (read: AMD’s) hardware. That’s sort of important but maybe Intel figured that since it was just 3DMark and some games that the law didn’t apply to them anymore. This is not the first time that Intel has decided to stop disclosing this fact.

Ultimately, we just want to see honest benchmarking from Intel instead of data that serves no other purpose than to mislead consumers. It’s hard to accept any of their benchmarking data when they’re willing to produce this kind of material. Not all marketing material from any company reflects the whole truth, nor should we expect it to, but that’s no excuse for a company to market something that is simply untrue to consumers. Bad marketing is not an acceptable to make up for a deficiency in a product. If Intel feels that their lead in mobile is threatened by AMD, they should cut prices or offer a better product. In the future, we hope that this is what they focus on, and we hope their CES presentation today will be more candid.