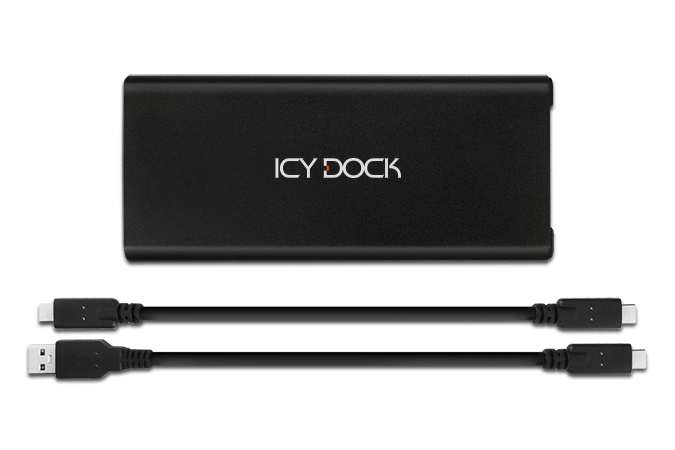 There are a lot of NVMe-to-USB 3.2 adapters on the market, and unfortunately many of them are of poor quality. Previous units I have tested have universally failed my testing, some of them have even completely died during my testing. Once I have tested enough units, I plan to post a follow-up comparative review contrasting the performance of various models and including the results of units which failed my tests.

When I learned that IcyDock had released their own NVMe-to-USB 3.2 Gen 2 adapter, I expressed my concerns to them. Despite their best efforts at persuasion that their unit would not fail my testing, I remained skeptical – so they sent me a unit so that I could test it and see for myself. At the time, I had not yet joined AdoredTV – so they didn’t expect I would publish a review of it here when they sent it to me.

For my testing of this device I used a 2TB Intel 660p NVMe drive which I purchased myself, connected to a i9-9980hk (Mobile Cofeelake) computer.

What’s in the Box

The enclosure has two parts – a plastic bottom which the electrical components are secured to, and an aluminum top. Setting up the IcyNano was fairly easy: pop off the top, insert the NVMe drive, and adjust the securing mechanism to the size of the NVMe drive you wish to use. Afterwards, apply the thermal pad and then put the top back on – pretty simple.

When the included thermal pad is installed on the NVMe drive, it makes contact with the top – which basically turns it into a heat-sink. There are no ventilation holes in the unit, which initially concerned me given my experience with other units. However, during actual usage the device did not get hot at all.

As mentioned in the preface, previous units I have tested universally failed my testing. The first stress test is a series of consecutive CrystalDiskMark runs. Adapters I previously tested would fail after 3 or 4 tests, likely due to overheating, and produce a “USB device not recognized” error in Windows. Here’s a video example of this happening with another unit.

After multiple consecutive CrystalDiskMark tests, the enclosure remained merely warm – it didn’t get hot at all. I ran it 8 times in a row before moving to the next test. Synthetic performance was good too, with read speeds just shy of 885MB/s. 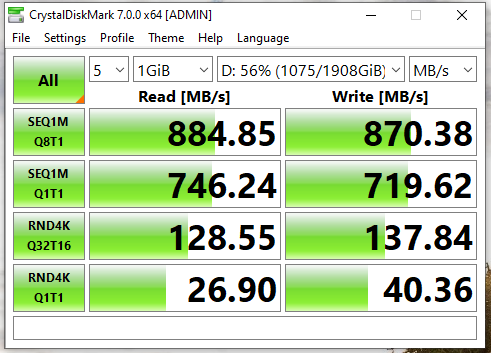 The second test I performed was a simple transfer of the Metro: Exodus and Crysis Remastered game folders, approximately 177GB in total. After I started the transfer I left my computer, half-expecting to come back to the same errors mentioned above. To my surprise, the file transfer had completed without any issues.

The last test I performed was a full format of the NVMe drive while connected via the adapter, which completed without issue. After stress testing I used the adapter in a variety of scenarios over the course of a few days and it performed well, without any problems at all.

To demonstrate real world performance, I performed two tests. First, I copied the game folders of Skyrim SE, Sleeping Dogs, State of Decay YOSE, Strange Brigade, The Surge 2, Thief (Reboot), Tomb Raider (2013), and The Elder Scrolls online. Game folders tend to have a lot of large and small files, so this is a more taxing test. 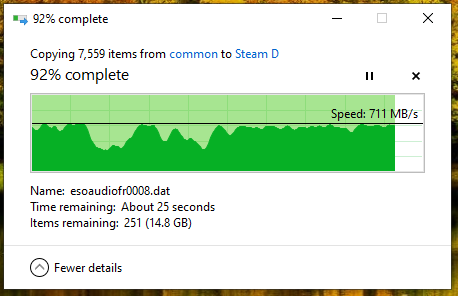 The second test I did was a copy of one large, contiguous file – a 22GB RAR archive file. This test provided slightly better read speeds of ~710MB/sec and remained consistent over the whole copy. 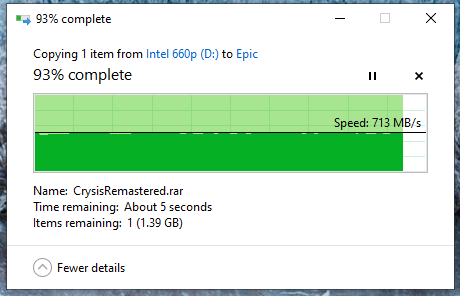 Copying the mixed sized files to the IcyNano provided average speeds of ~500MB/sec. Please note that the lower speed shown at the end of the graph below is due to nature of Intel’s 660p that was used in the IcyNano, and does not reflect the performance of the IcyNano itself. 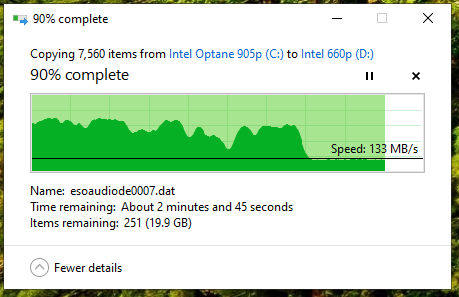 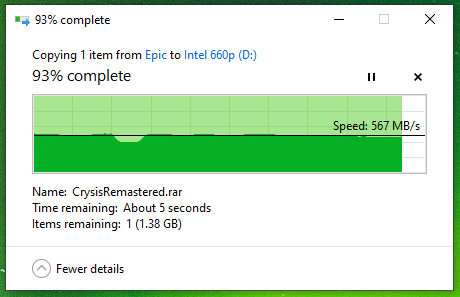 I was impressed by the IcyNano NVMe-to-USB 3.2 Gen 2 Adapter. Read speeds were great, although write speeds were slightly slower than I had hoped for. It doesn’t get hot, and its performance remains consistent even after extended usage.

This is the first NVMe-to-USB adapter I can actually recommend for purchase. If you’re in the market for a device such as this, I highly recommend IcyDock’s adapter. At $59.99 on Amazon it’s not the cheapest option, but it’s the only one of my test units that didn’t stop working during stress testing – making it a better value than the cheaper units which failed my tests.