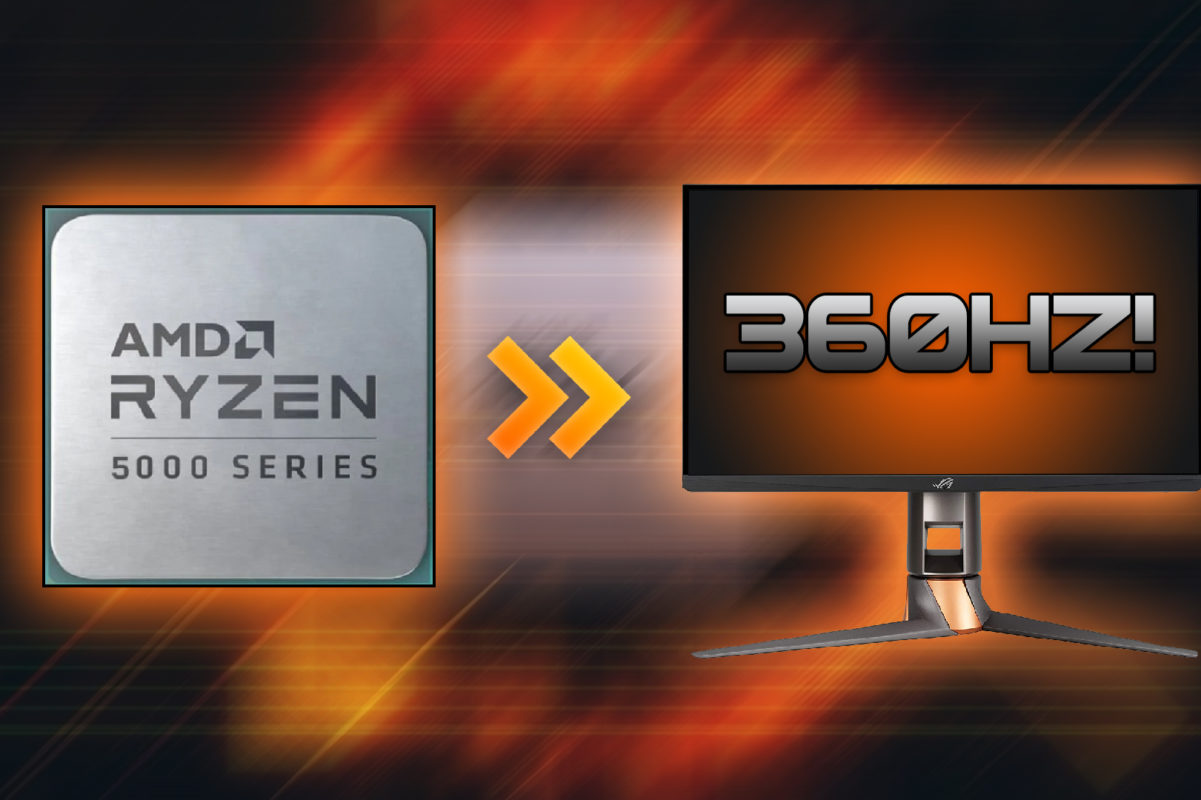 For those who would rather watch the video please watch below, as most of this is covered in the video.

As you may know PC gaming has exploded the past few years, and a bulk of those people play competitive multiplayer or eSports games,  these gamers have typically been buying Intel CPUs in order to get the highest possible FPS in those titles. As Ryzen’s Achilles heel has been high FPS gaming, which in this case is almost entirely latency based. Gaming in and of itself is a latency-based application since you need to draw X amount of frames per second.

This has partially been since Intel retained the lead in single core or lightly threaded performance and AMD’s latency issues with its Infinity fabric. AMD even made sure to mention at the Ryzen 5000 launch how they’ve taken the lead in eSports titles and are the fastest gaming CPUs on the market.

What AMD has done specifically with its Zen 3 arch, aka ryzen 5000 series, was to fix the major flaw in its architecture for gaming which is when some games lean specifically hard on one thread (words like unoptimized, single core and others may spring to mind) Ryzen 1-3000 series parts lacked the ability to allocate all of their cache to the most heavily worked cores. Each generation has improved this incrementally with the current model being the largest leap, with this generation also improving on Cores ability to communicate with each other.

This channel has a bit of history in complaining on reviewers using lower resolution and lower settings in benchmarks as Jim has once said “Who in their right mind would want 400 FPS in tomb raider at normal over at ultra at 150FPS” however today I’m doing something a bit different, I am specifically looking at popular multiplayer titles as I feel they are generally ignored by the press.

And I like other reviewers do have a standard set of games that I test for reviews, what I’m doing today is a bit different. These titles are games I see popular on twitch, some of my friends play, or seem to have a strong fanbase.

It’s also important to note that for these gamers these frame rates might be what they actually want, Tomb Raider at 350 FPS makes no sense but these eSports/competitive multiplayer different story.

with competitive gamers switching over to 240Hz in many titles and with the newer 360Hz panels constantly selling out and higher refresh rate monitors in the works, we are really looking at a moving target here.

I have tested using what is generally accepted as “competitive” settings this will typically be low however notes will be made for specific games as certain games will have shadows at medium instead of low and textures on high for specific reasons that their community has found. This is to try to recreate a “real” scenario as close as possible.

For this video I will be using the following hardware a Ryzen 5600X and a Ryzen 3600X, an ASUS B550 Strix E motherboard , 16GB of G.Skill Trident Z Gold at 3600MHz CL14 and a Powercolor Radeon 6800, the radeon cards are supposed to be better at 1080P gaming though in honestly it was chosen because it was what was available to me at the time and a loaner card.

For CS:GO We tested at Medium settings and in two resolutions 1080P and 960P which is 4:3 stretched which is a popular resolution for competitive players to use.

For this test we use the benchmark from the workshop and run the test for 90 seconds.

At 1080P we see an even larger increase of 45% however oddly enough the minimum frames are only a 25% increase.

I tested in a training match for 120 seconds at low settings in DX12, I used the average of 5 runs instead of 3 to try to iron out any variability and had to throw out quite a few runs.

For this test we see a 13% increase on the average FPS and a 15% performance increase on the 99th percentile, I believe this is due to COD being a better optimized game that uses more threads. This showing which not as impressive as the CS: result is still a relatively impressive improvement for those looking to push 240Hz consistently.

For DOTA 2 we used a replay of a pro match and recorded for 120 seconds which involved a team fight. It was tested at high textures and everything else on low in DX11 at 1080P

Here we see 46% performance jump on the average and just under a whopping 60% performance increase on the 99th percentile. The jump from 82 to 131 is a noticeable leap that most would be able to appreciate.

For the benchmark we used a scenario from the creative mode I found a benchmark that is likely a bit overkill but was incredibly repeatable. It was tested for 60 seconds at 1080P low in DX11 (dx 12 showed regression)

Heroes Of The Storm

Now on to Blizzards Heroes of the Storm a semi popular MOBA which several of our community members play. I once again I used a replay here to get a consistent result. The team fight here is less intensive than the DOTA test which may contribute to the results you’ll see below.

For the average FPS we see a massive 77% performance jump from the previous generation and in a reversal of what we saw with DOTA 2 a 41% performance increase in the 99th percentile. And again this may have to do partially with the fact this test was a bit lighter on the system overall, or just due to differences in the engines.

For Player Unknowns battle grounds, the game that started the whole battle royale craze we tested at 1080P with ultra textures and view distance with everything else set to low. I used a replay of one of my own games for 2 minutes. It includes parachuting and landing in the Miramar map.

Looking at the average we see a 24% increase with the average jumping over 165FPS and a 26% increase in performance on the 99th percentile.

Rogue Company is a popular class-based team 3rd person shooter that took twitch by storm last year. In this game we tested at max settings as it makes absolutely no difference with this GPU and tested during the tutorial for 90 seconds.

The frame rate here is off the charts especially considering how hard the game fought me to get it to uncap this high. That being said the 53% average FPS increase is quite impressive, however the 59% 99th percentile jump in FPS is fantastic for those with 240Hz monitors.

On to Rainbow Six Siege, a 1st person competitive shooter which I’ve had a few hundred hours sunk into over the past few years.

for Siege I decided to test in two different scenarios for one I did an offline match against bots and the other I did the canned benchmark. I had also tried to do 4:3 testing however it had no real performance change. For the bot match I did a run through for 120 seconds  in the Kafé map. All settings were set to low and the API used was Vulkan.

The results on the average FPS is a staggering 94% increase and is one of the biggest performance difference in any game I tested for this video. Looking at the 99th percentile the number is EVEN HIGHER at 105% increase which is over double.

Now on to the new canned benchmark, we see a 40% increase in average FPS and a 28% jump on the 99th percentile. which while good is not the same as the numbers previously shown, and a part of this is the fact the CPU just really isn’t being pushed all that hard and testing the canned benchmark for CPUs probably isn’t ideal if you are trying to capture realistic performance, although testing the other way did take a significantly longer amount of time, probably 5 to 10 times longer due to the amount of runs you have to throw out.

Starcraft 2 although long in the tooth is still one of the most popular RTS games out there with an eSports scene that still exists. For this we tested the benchmark in the arcade for 120 seconds at low settings.

For the average FPS in this very taxing scene it shows a 97% lead over the previous gen 3600X. which is a whole lot for the 99th percentile its about 55% which is quite impressive though honestly the difference between 9fps and 14 is still pretty much unplayable but this test is one of those overkill tests to begin with.

On to one of the most popular titles of last year, Escape From Tarkov, an early access first person survival mmo thing that is hard to define and a personal favorite of mine. I tested using mixed settings from the video linked below. The run is 120 seconds on a offline mode on the reserve map in patch 12.8 which was known to be one of the worst running maps in the game.

In the average FPS we see the 5600X leading the 3600X by a 31% margin and a 30% margin in the 99th  which is still quite impressive for a game with optimization issues.

For the run I did the shooting gallery trainer in the training area which is not very indicative of a heated match however the percentage difference during an actual game seems roughly the same though let me know if you have any suggestions for this title.

Valorant gets over 1000FPS on average with the 5600X so much so that I actually got pretty loud coil whine from the GPU. The 500+ fps from the 3600X is still respectable but at least from an academic sense double the performance again is massive. Its slightly over double again for the 99th percentile though for most users except those looking at 280Hz+ monitors who NEED to get their monitors refresh rate all the time the 3600X would be great for Valorant.

For War Thunder I used the Tank battle benchmark on low settings, the air battle tests scaled similarly but were once again in the 700+ FPS mark which just seemed excessive.

World of Tanks has an external benchmark which I used to round out our list. I tested using DX11 at medium settings and recorded the test for 3 minutes.

So in doing this testing honestly I was shocked once I saw the results, I thought the best case scenarios would be 40-60% faster rather than double.

One of the reasons why I decided to test the games the way I did today, was the fact that Intel held such a lead in the competitive gaming market and was Intel’s primary strength. I had intended to test the 9900K I have as well but due to time constraints I only could do these two CPUs before I had to send the card back.

So, with the release of Ryzen 3000 AMD had mostly caught up with Intel in gaming workloads but were lacking in ultra-competitive shooters and other esports titles where high frame rates are not just expected but demanded.

And while many users were just fine with the performance on previous processors there are some who absolutely demand the best possible performance, all other things including price be damned. With that said I’m not telling everyone that they need to throw out their 3000 series Ryzen CPUs or even the 1st generation models.

If you tend to play most games in graphics bound scenarios and aren’t running a 3090 the difference between these CPUs tends to be negligible as other reviews have shown, however if your aim is hitting the highest possible FPS in these titles shown today 5000 series parts show a great option on the same existing platform for users who already have supporting motherboard