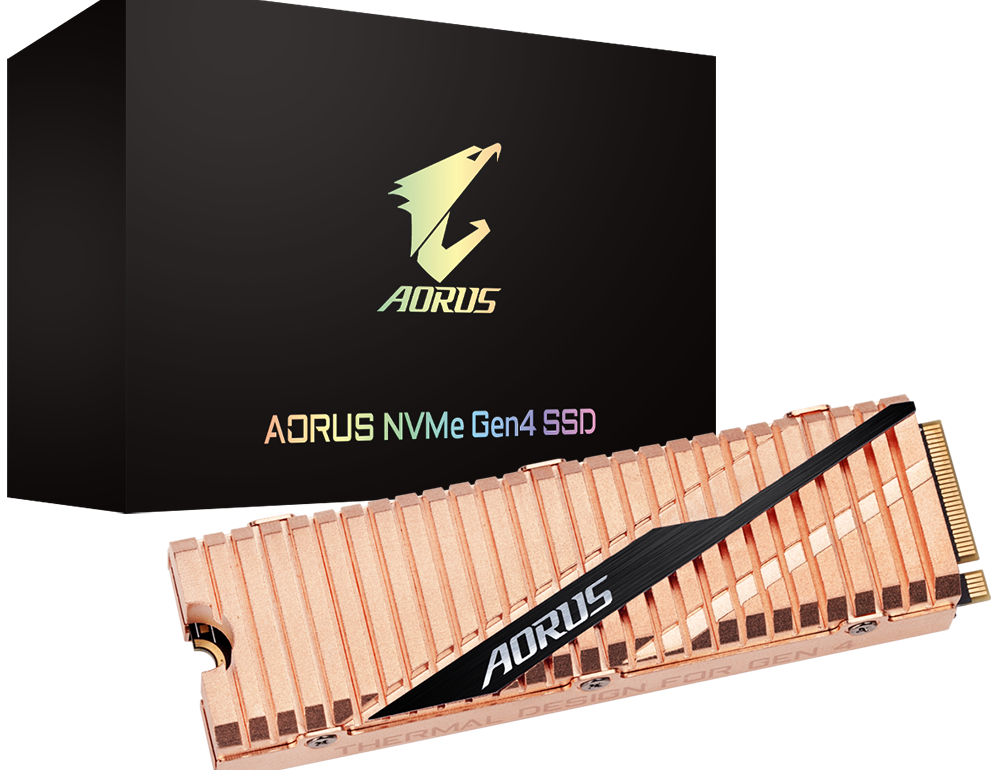 Along with new X570 motherboards and AORUS gaming monitors, GIGABYTE also has announced their new PCIe 4.0 Aorus NVMe drive which comes in a full body copper heatsink made to deal with the higher temperatures from the increased speeds. The unit comes in three capacities: 500GB, 1TB and 2TB. The drive is rated to deliver sequential read and write speeds of 5000/4400MB/s.

“When the PCIe 4.0 specification was announced, GIGABYTE was already a step ahead in preparation for the development of the product. Through the smaller size and superior performance attributes of the NVMe PCIe 4.0 M.2 interface, performance seeking users will be able to unleash the best SSD performance GIGABYTE AORUS NVMe Gen4 SSD further advances the standards set by our previous SSD products. The SSD fulfills many users’ expectations and users are getting better performance, a better thermal design, a GIGABYTE Ultra Durable certified product, and a nice selection of size capacities at 500GB, 1TB, and 2TB.”

Gigabyte has also said the drives have been stress tested in rigorous conditions with various high-load test software under high temperatures and pressure which they say is partly due to the copper heatsink that has 30 fins and has been sandblasted as well as a high conductivity thermal pad.

Pricing is yet to be announced. However, we will be sure to update as we receive more information.

This along with the Corsair MP600 PCIe 4.0 M.2 SSD that was recently announced will take the crown as the fastest sequential drives on the market for sure, though exactly how they stack up with the bad boys during more intense workloads remains to be seen.

Along with the already pretty amazing AORUS NVMe M.2 SSD, the company also showed off a massive quad-SSD adapter prototype which features 4x 2TB PCIe 4.0 drives on a single board for a total capacity of 8TB and a maximum read speed of 15GB/s. The whole unit would require an entire PCIe 4.0 x16 connection and features a massive, thick metal front plate along with a blower style fan for cooling.

The adapter is still in the prototype phase, but GIGABYTE is aiming the final product at creative professionals. No word on pricing, but we’re sure it’s going to be a lot once you factor in the price of the drives.