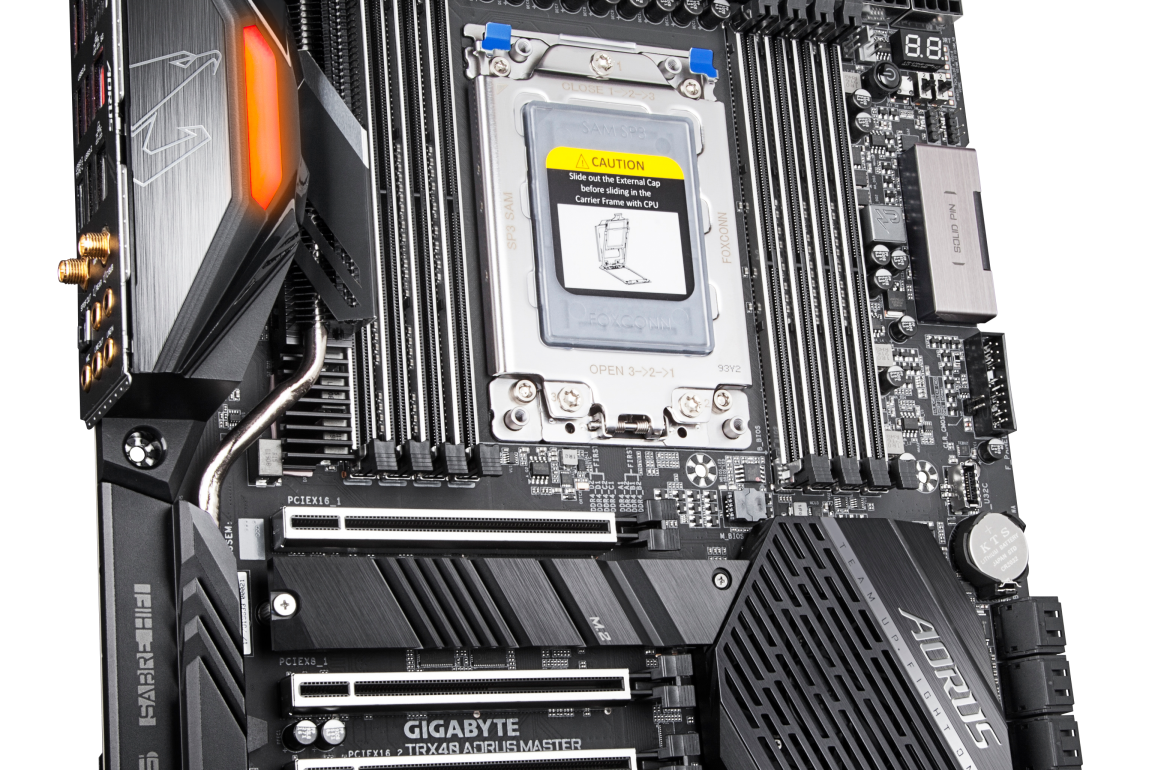 Gigabyte has probably had one of the best X570 launches out of every board vendor and they hope to push that momentum into the newly launched TRX40 platform designed for the newest AMD Ryzen Threadripper parts.

These boards will feature up to a 16+3 Phase power design which will be in the flagship AORUS XTREME and will use an also impressive sounding thermal solution that uses “Fins-Array technology, A Nanocarbon Baseplate and a 8mm mega heatpipe as well as aluminum I/O Armor and finally a 50mm chipset fan” all in all this is rather impressive but lets get down to the boards themselves.

The Aorus Xtreme is their top of the line motherboard packing dual intel 10GbE, Intel WiFi 6AX, an ESS Sabre HiFi 9218 DAC as well as 4 M.2 PICe slots. This board uses a slightly beefed up 16 phase VRM power design which is similar to the one used on the X570 AORUS XTREME, though this time it is 16+0 with a 3 phase SOC that is separate rather than a 14+2 that comes on the X570 variant. It’s also important to note that Gigabyte has repeatedly stated in their materials that there is NO doublers or anything being driven in parallel and all signals are independent.

This board uses an entire VRM system supplied by Infineon and should have no trouble with any of the CPUs AMD has launched especially considering that these are 70AMP Vcore phases.

The other 3 phases are dedicated to the SOC which are also Infineon supplied. It has a dual BIOS switch, Debug LED and voltage read points. It is also covered in a large heatsink and a full metal backplate on the rear. Pricing hasn’t been announced but I would not be surprised if this costs more than some entire budget PCs.

The Master is a step down while still retaining most of the features and seemingly the same VRM, but with a less substantial heatsink and a few less ports as well as 3 M.2 slots instead of 4. This will likely be what more people end up picking up though that is really dependent on pricing.

Finally for the AORUS Pro WiFi, this board will likely be the cheapest option as it features a 12+2 phase design, lacks the debug LED, voltage readout points and Dual BIOS switch which, on Gigabyte boards can be a big deal since it will auto switch over to the back up BIOS if you push for somewhat unstable or finicky memory OC and need a few boots to get it running. Most users probably won’t run into that issue but a fair bit of our readers are tweakers and might want the heads up.

The board still does have many high-end features which is what we would hope for on this new Threadripper platform. Overall this is a definitely what would likely end up being a great option for those who don’t need all the highest end features and need to save some cash.

The Designare motherboards are Gigabyte’s workstation/productivity focused motherboards, though it will have many of the same features as the AORUS XTREME. This one has dual Intel Gigabit LAN, a few USB2.0 ports for backwards compatability and in general is a bit less flashy and focused on overclocking features.