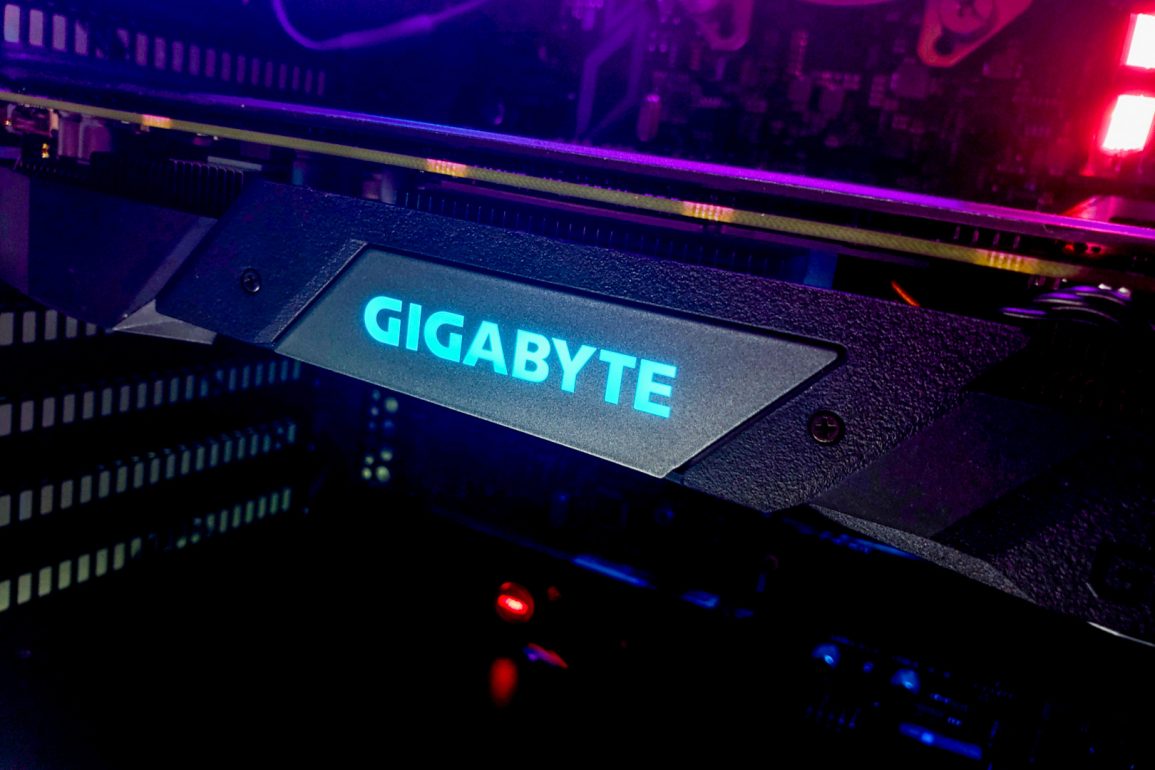 Now that we know that the cost of entry for AMD’s Navi-based Radeon RX 5700 series will be $379 and above, there are no doubt many of you who were holding out hope for a card that is priced in the sub-$300 market and are now looking elsewhere to fulfill your gaming needs.

Today, we’ll be looking at exactly such a card from our friends at GIGABYTE: The GeForce GTX 1660 Ti Gaming OC which retails for $299, a slight increase from the base MSRP of the reference GTX 1660 Ti which is $279.

Looking at the specifications, we can see that the Gaming OC offers a 90 MHz factory overclock compared to the reference GTX 1660 Ti. This is a roughly 5% increase in maximum clock speed. That increase should help justify the price increase, but that alone will likely not be enough to warrant a recommendation.

EDIT: corrected % increase in clock speed from 11% to 5% vs reference.

Now that we’ve gone over the specifications, let’s take a look at the card itself to give you an idea what you’ll be getting.

Starting with the box, you can see the normal GIGABYTE styling on the front, along with the mechanical “bird’s eye” the company likes so much. On the back, we actually get a nice look at the cooling system, and of course, a look at the card’s RGB capabilities.

Taking a look at the card itself, we can see it features a triple-fan cooling design, along with a full-cover backplate which is made of plastic and extends into the plastic fan-shroud at the back. Overall, it’s a nice looking design, although we would have preferred to see a metal backplate, especially at this pricing.

The card measures 280mm (11-inches) long x 116.7mm (4.5-inches) wide, and features a standard dual-slot design. It is also powered by a single 8-pin PCIe power connector, which is the same as the reference board. The PCB itself is actually shorter than the cooler, measuring only just 225mm or just under 9-inches. It also features 4+2-phase VRM.

RGB-lovers will be happy to know that the GIGABYTE logo on the side features full RGB illumination and the card works with GIGABYTE’s RGB Fusion ecosystem, so you can sync it with your motherboard and other GIGABYTE/AORUS products.

The fans themselves deploy GIGABYTE’s patented “Alternate Spinning” technology. This allows the center fan to spin in the opposite direction, which is claimed to create a smoother, less turbulent airflow path and provide improved heat dissipation. Like many other cards in the market today, the fans will also remain off when the GPU is idle or not under stress.

Using MSI Afterburner, we overclocked the GIGABYTE GTX 1660 Ti Gaming OC even further than it came out of the box. We managed a Core Clock offset of 135MHz (bringing total to 1995MHz), and Memory Clock offset of 1000MHz bringing our memory speed up to 14Gbps. Theoretically, this should improve performance quite a bit, especially in more memory demanding titles. We’ll find out soon enough.

Looking at total system power, we can see that at stock the 1660 Ti uses a little less power than the GTX 1070 FE and about the same amount once overclocked. While the 1660 Ti does have fewer CUDA cores than the GTX 1070, it does have a higher clock speed, so the the power draw similarities make sense, even despite the more refined manufacturing process.

That said, the superior cooling capabilities of the GIGABYTE card’s triple-fan cooling system are shown off here, as even while overclocked our temperature delta is significantly lower.

Starting with 3DMark Fire Strike as the GTX 1070 takes the lead by as much as 12% over the stock 1660 Ti, while the overclocked config narrows the lead by 3%.

The story changes with 3DMark Time Spy, as we see that the 1660 Ti offers a 3% higher score than the GTX 1070, while the overclocked variant barely shows any improvement.

Looking at the above graphs, we can see that at 1080p, the GIGABYTE card does offer 9% more performance on average when compared to the GTX 1070 FE. That said, when looking at the 0.1% lows we can see that performance is actually quite a bit worse at 37% lower. This is alleviated once the card is overclocked as it gains a 7% lead in 0.1% lows and increases its overall lead to 14%.

At 1440p, the story is a little different. This time, the GIGABYTE card maintains leads in all areas with a 13% increase in average frame rate and a staggering 50% increase in the 0.1% lows. Once overclocked the card gains an additional 7% in overall performance.

At 1080p in Tomb Raider, the 1660 Ti offers the best performance at stock, we’re not exactly sure why but we ran the test multiple times to verify the results. Nonetheless, both configurations are very similar.

At 1440p, the story is very similar. Stock and overclocked results are nearly identical with the stock offering best performance overall. Again, the 1660 Ti leads the GTX 1070 FE, this time by 9% on average.

Far Cry: New Dawn sees a return to normalcy. At 1080p, we have all cards offering fairly similar performance, although this time we do see a 5% increase in performance from our overclocked configuration when compared to stock.

At 1440p, it’s a very similar story with the GIGABYTE card offering 10% more performance when compared to the GTX 1070 FE. Once overclocked, we do get an additional 7% more performance on average, which is a fairly nice improvement.

It’s worth noting that for this title we have the GTX 1070 running in DX11 mode, while the GTX 1660 Ti is in DX12 mode, as that is how both cards performed best and were most stable.

Upping the resolution to 1440p actually gives the GTX 1070 FE the lead for the first time in this report. Overall, the GTX 1070 offers 13% more performance than either of the other configurations in this test.

Well, that didn’t last long. In Resident Evil 2, the GTX 1660 Ti takes the lead back, offering 5% more performance at stock and an additional 8% once overclocked at 1080p.

Moving on to Battlefield V, we see that the GTX 1660 Ti offers a miniscule 3% performance increase over the GTX 1070 FE on average, but also loses by 31% in 0.1% lows. These results are not unplayable, but there will be a noticeable micro-stutter which some users may be more perceptible to than others.

The Division 2 shows an 11% lead for the GTX 1660 Ti at 1080p. Sadly, our overclocked configuration was unable to load the game at all, and therefore has not made it on the charts.

Gears of War 4 gives the GTX 1070 FE another win with a 17% increase in performance compared to the stock GTX 1660 Ti, while the overclocked variant only gains a measly 1% performance overall.

At 1440p, the GTX 1070 FE again shows dominance in this older title, with an 18% gap between it and the stock GTX 1660 Ti. This is one title that clearly favors Pascal over Turing.

Would you look at that? The GTX 1660 Ti utterly smashes the GTX 1070 FE with an average FPS that is 31% higher at stock. Once overclocked, the lead is furthered by another 10%. Please note that Turing’s Variable Rate Shading or VRS is not enabled, despite it being supported by this title.

We test this title using the game’s built in benchmark utility.

Our final test, World War Z has the GTX 1660 Ti leading by 6% in average frame rate, while the 0.1% lows are a blistering 52% higher when compared to the GTX 1070. Overclocking the GTX 1660 Ti sees its lead increased by an additional 5% on average.

At $299, the GIGABYTE GeForce GTX 1660 Ti Gaming OC is pretty far from the most expensive GTX 1660 Ti model available, in fact it’s at least $30 cheaper than the ASUS STRIX Gaming OC model, which is also clocked 30MHz (1890MHz) from the factory. So, from that perspective, the GIGABYTE card actually seems like a good value, if you’re looking for a triple-fan cooling solution. That said, the board design found on the Gaming OC is also the very same one used on the GIGABYTE GeForce GTX 1660 Ti WINDFORCE, which is a dual-fan card that is $20 cheaper and clocked slightly lower at 1845MHz. So, we’d imagine that card to perform fairly close to this one, and likely overclock just as well, albeit with marginally higher operating temperatures.

Of course, if you’re reading this review you may be trying to decide which 1660 Ti to buy, or maybe you’re wondering if you should buy one at all. On average, that GIGABYTE card shown in this review performs 6.3% faster than the GTX 1070 FE at 1080p, making it a strong contender as a worthy upgrade for GTX 1060 owners, or folks with even older hardware such as the GTX 970 or R9 290 who don’t want to spend more than $300. That said, there is also the Vega 56, which we’ve not tested here, but should perform similarly, if not slightly better in most cases. You’ll also find models from PowerColor and Saphire that are priced at the same $300 as the subject of this review, and that definitely makes a recommendation a bit harder for us, but we’d still say it’s a fairly decent buy.

With great cooling performance, and rather fantastic overall gaming performance as well as fairly solid overclocking potential, we’d say that the GIGABYTE GeForce GTX 1660 Ti Gaming OC is a solid choice for gamers looking to spend $300 or less on a graphics card for 1080p and 1440p gaming.

Check out the GIGABYTE GeForce GTX 1660 Ti on Amazon