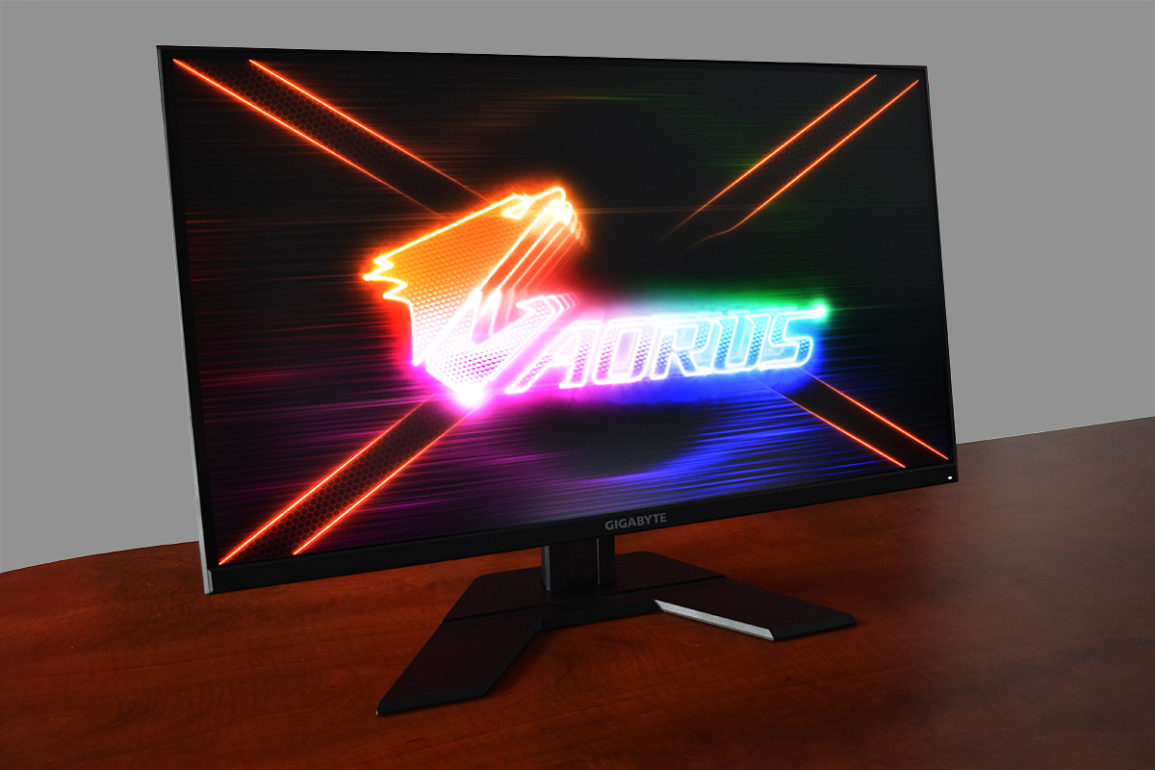 Gaming monitors are in demand nowadays. Everyone’s looking for that extra edge that peak-performing hardware can give. Manufacturers have been churning out “gaming”-branded devices to satisfy that need, with a wide range of results. When it comes to monitors, the most successful “gaming” designs traditionally have been smaller TN panels due to being able to achieve high refresh rates, low ghosting, and low input latency, but at the cost of viewing angles, color accuracy, or other desirable attributes. Gigabyte presents a new gaming monitor that bridges that gap of eSport-level performance and desirable qualities of newer display advancements, providing a design with the fidelity and sharpness of IPS panels along with the high refresh rates, low ghosting, and fast response times achievable by these new displays.

The specifications of a monitor make or break the product. The Gigabyte G27F doesn’t disappoint, providing a high feature set targeting fast-paced gaming.

The monitor stand is very sturdy with a solid base to keep the monitor from wobbling if you bump your working surface. It has a smooth vertical adjustment and holds in place firm with no droop or shifting, likely helped by a well-balanced counterweight in the stand and the sleeve inside the stand that the vertical mount rides on. Gigabyte adorns the top surface of the stand with their logo.

Underneath the back of the monitor, we have the collection of down-facing connections. A standard 3.5mm headphone jack is next to the DisplayPort 1.2 a dual HDMI 1.4 ports. The DC plug for power from the adapter is in the center, and a pair of USB 3.0 Type-A ports with a Type-B to uplink to the computer. While these remote ports are most welcome, useful for connecting a keyboard and mouse without having to reach all the way back to the computer tower, I feel it could really benefit from a third USB port to connect a USB headset, gamepad, or game controller. Another thing I discovered is that the amp rating for the USB ports is fairly low, not even providing enough power to drive our i1Display calibration tool. Using a Samsung Galaxy S8, I determined that the ports’ output was only 580-640mA, showing power output at less than the 900mA max that the USB 3.0 spec provides, and likely why our demanding calibration tool didn’t work. It will be more than adequate to drive a headset, keyboard, mouse, or other such lower-power peripherals, but don’t expect it to provide adequate power to run more demanding USB devices requiring the most out of the USB 3.0 spec or fast-charging devices not compatible with Battery Charging v1.2. The User’s Manual (PDF) explicitly lists the Apple iPad, Galaxy Tab2 10.1, and Galaxy TabPro as not able to be charged via the USB ports at all.

The monitor comes well-wrapped in protective film. You can see some along the top portion on the back (in the first picture in this section) as well as some wing pieces near the inputs in the picture above.

The Display has a fairly narrow plastic bezel. The actual screen, however, falls short of actually reaching the bezel and has a narrow black border all around. This is actually pretty common with IPS panels I’ve used. However the plastic bezel isn’t quite as diminutive as other monitors such as the Acer CB271HU 27″ IPS or the Dell UltraSharp U2719D.

Viewing angles are superb, as is one of the hallmarks of IPS panels. The specifications claim the standard 178° and the Gigabyte G27F lives up to that claim. We captured images at three viewing angles and created a collage of these three angles.

The screen also comes equipped with a pair of 2-watt speakers that play up out of the vent on the rear of the monitor. While doing well to reproduce mid and high tones, there’s obviously not going to be any real bass produced by such small speakers. It is able to produce tones starting at 180Hz, but even with the volume fully up, they’re quiet, and slowly ramp up before reaching a loud level around 600Hz, and finally tapping out at 15kHz. Being so quiet in the low ranges is why you won’t really hear any bass out of these speakers: they’re just not designed to produce it. However, they can still be quite loud, reaching 75dBA two feet above the monitor and 65dBA at normal siting distance in front of the monitor.

The OSD (on-screen display) is very feature-full. So much in fact that Gigabyte provides their OSD Sidekick software so you can interact with the OSD from a desktop application. Otherwise, you can simply navigate the OSD using a joystick control on the back, behind the lower-right side of the monitor.

In preparation for calibrating, we set the OSD Color Temperature setting to “User Defined” and adjusted the brightness to around 250 nits. This is more a personal preference, as the “200 nits” found on other sites is a bit dim in my opinion, but is still in use as a lower common denominator for older, low quality panels. We hit 251 cd/m2 with a brightness of 65 in the OSD. Out of the box, the monitor was at 264 cd/m2, and the green trailed a bit behind in the levels. We also tested the max brightness as well. The panel specs rate it at 300 nits typical brightness and we measured 355.37 nits on user defined with 100 brightness and with no change in the color level ratios either. A solid win.

The monitor specs claim 95% DCI-P3 and 125% sRGB and once again the G27F delivers higher-than-spec marks at 97.0% DCI-P3 and 137.0% sRGB for Gamut volume. Our DisplayCAL profile provides just that much more for image quality vs simple RGB manual tuning though. Check the difference between our test image below (you’ll have to forgive the screen-door effect due to the camera): 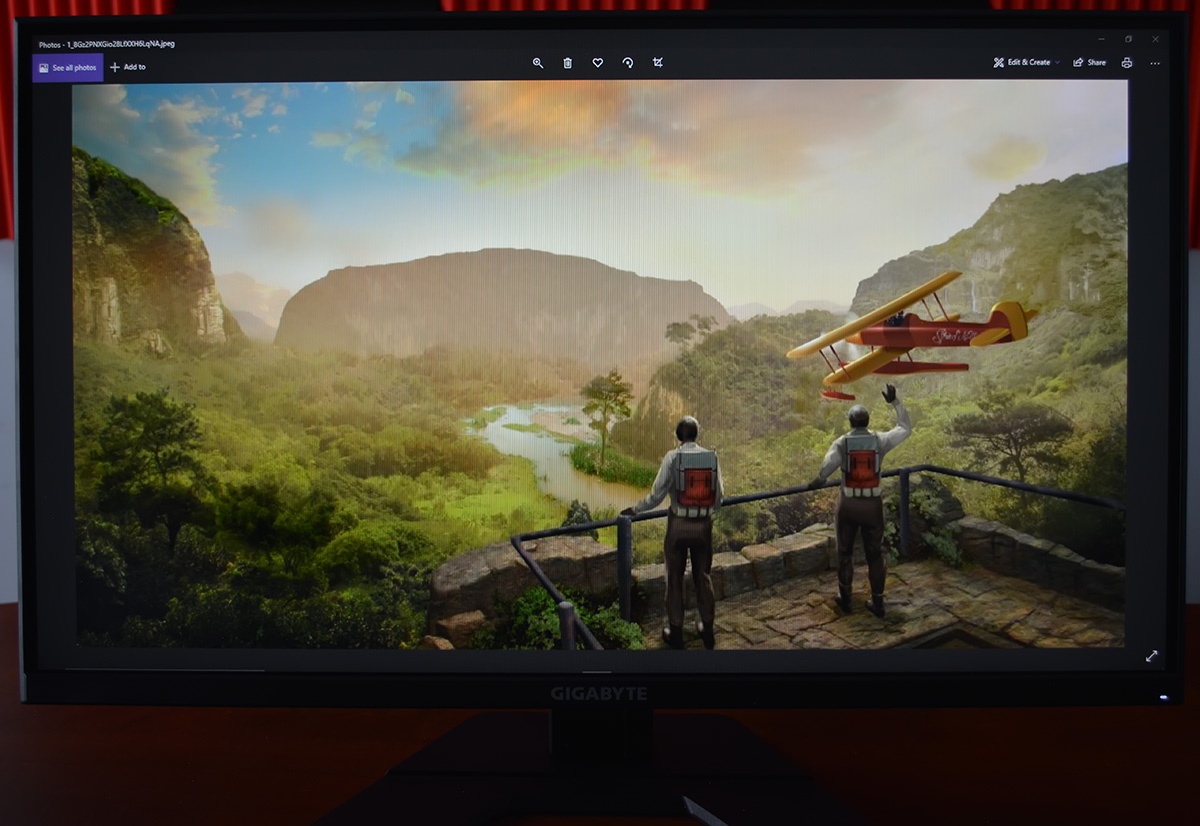 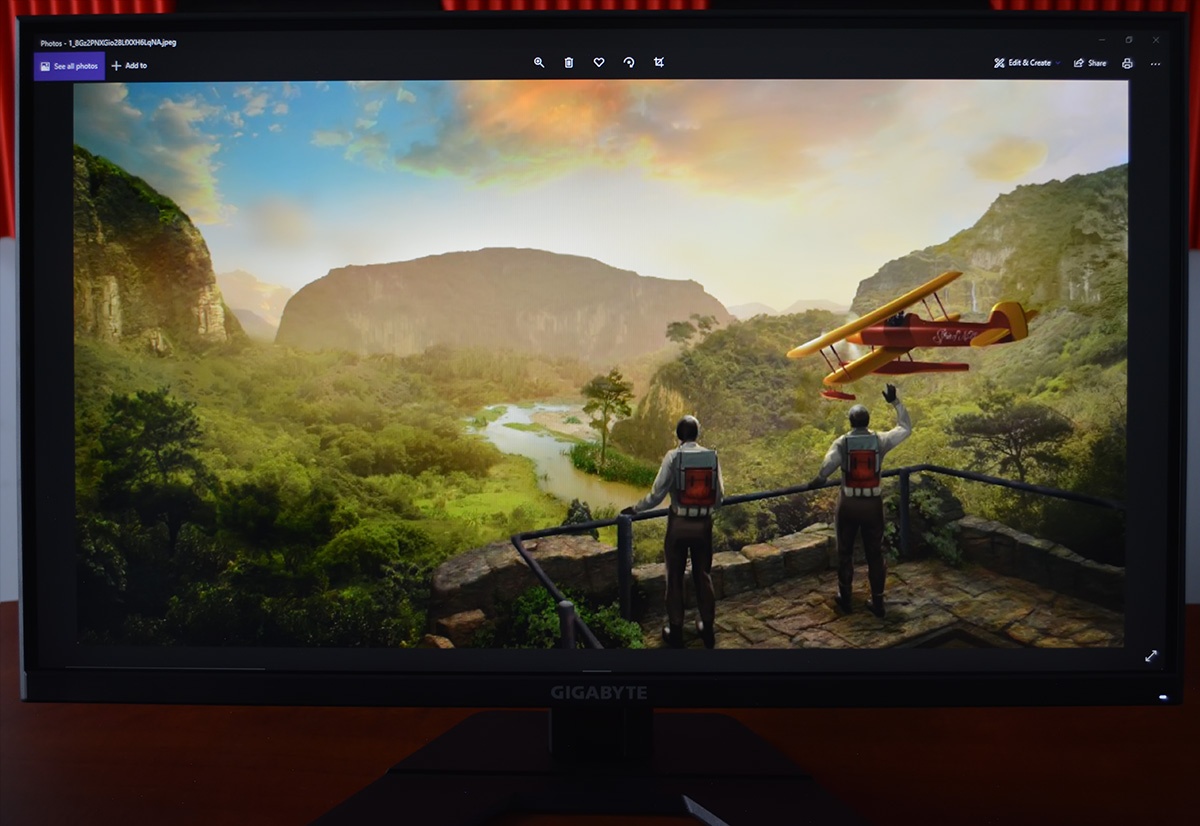 The most noticeable changes are the shadows in the leaves, the more vibrant red-yellow hue near the waterfall to the right, and the deeper color and tone on the stones in the foreground.

The Gigabyte G27F pulls top marks among the IPS and VA panels we’ve recently tested, even exceeding its 95% DCI-P3 and 125% sRGB specification by a comfortable margin. It falls 50 nits shy of achieving a 400 nit rating, landing itself in the middle of our pack though, but still well above its 300 nit typical brightness specification which is a nice bonus. While I do like Dark Mode where I can get it, having a bright, vivid monitor when you need is wonderful.

Gigabyte has certified the G27F as a FreeSync Premium monitor. The FreeSync Monitors list over at AMD.com has it listed for 48-165Hz over DisplayPort and 48-144Hz over HDMI. It’s refreshing to see a monitor wear the FreeSync badge foremost and not play the G-Sync Compatible branding game like we’ve seen so much in the monitor industry since NVIDIA first pushed the “compatible” branding. However, we’re still interested to see how the monitor fares with an NVIDIA GPU, as it’s only “G-Sync Compatible Ready” and not on NVIDIA’s certified list.

I spent some time trying to get G-Sync to work over HDMI, but was ultimately unsuccessful, likely owing to using a 10-series GPU. Flipping over to DisplayPort, G-Sync readily kicked in (with enabling the G-Sync compatibility checkbox in the NVIDIA control panel of course) and worked flawlessly in a handful of titles tested.

The monitor’s adaptive refresh rate is displayed using the OSD FPS option and adjusted with the game’s FPS and presented a smooth gaming experience. Being above 60fps regularly, due to testing on a 1080 Ti, did in itself limit the stuttering that would have been experienced, but having been played previously on a 60Hz non-FreeSync monitor, there was a removal of the occasional frame stutter previously seen.

Also tested as the “Black Equalizer” feature, which basically shifts the black midpoint level of the screen. However, if you look at the OSD for the Black Equalizer level, it remains dark, showing that it’s only lightening the video output sent to the screen, rather than the screen itself.

The Gigabyte G27F is a solid monitor; from its robust stand and precise adjustments to the quality IPS panel used. The 27″ diagonal screen size provides a larger viewing area than the usual eSports monitor. Remaining at 1080p, it ensures lower-end GPUs can achieve the high frame rates in FPS titles that can push the 144Hz refresh rate, but with the addition of FreeSync Premium support, it can still produce a smooth experience when the frames drop below 60fps as well. The out-of-the-box color calibration was a little weak on the green, but is easily remedied with very minor adjustment and has great gamut volume for its price point.

Having a USB 3.0 hub built into the monitor is certainly a nice bonus. While we’d have liked to see better power output or just better charging compatibility, it can certainly provide a keyboard and mouse output to reduce the need for a laptop dock or proximity to a potentially-noisy gaming tower. To that last end though, even just one more USB port would have been welcome. The 3.5mm headphone jack is beneficial for wired headsets though, reducing the likelihood the cable would run in close proximity to fans or other feedback or electrical noise sources.

If you’re in the market for a 27″ flat IPS panel for 1080p gaming, the Gigabyte G27F should be on your shortlist as a solid option.