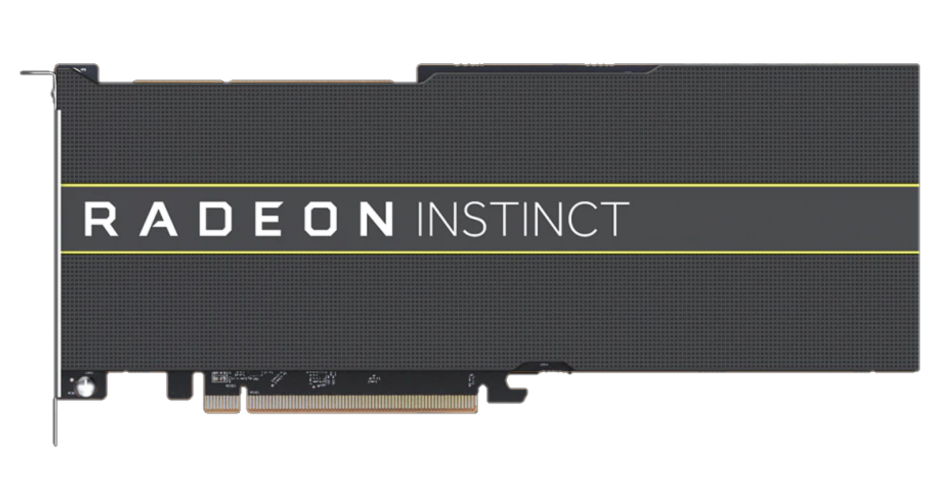 We promised another leak in our previous Milan article and today we’re fulfilling that. We’ve got some info to share about AMD’s upcoming MI100 GPU, based on the new CDNA architecture. Just like our Milan leak, we’re really confident in what we’re about to say, and this time we can even share a tiny snippet of a slide. However, all other materials are sadly unable to be shown so once again we have compiled some slides of our own.

Starting with the specifications, MI100 is like a big MI50, with double the compute units, 32 GB of VRAM (we assume there is no 16 GB model), and somewhat higher memory bandwidth. Performance, on the other hand, is more than double in some cases. We also want to point out the GPU link technology, which AMD discussed in their Financial Analyst Day; MI100 has more links for more GPUs, which means multi GPU configurations are going to get very, very fast compared to MI50, which only had 2 links for 3 GPUs total. As for availability, the GPU itself should launch in either Q3 or Q4, and OEM systems using these GPUs will come out by Q1 2021, but we expect some Epyc based OEM systems to come out this year.

MI100 appears to have the same level of infinity fabric compatibility and capability whether Rome or Milan is used, which makes sense since the IO die between these two CPUs should be about the same or even identical. GPU to GPU IF also works on Xeon. There are two configurations for MI100, one which allows for 4 GPUs per cluster/group and one that allows for 8 (which is where the 6 maximum links come into play). AMD thinks MI100 will be competitive against A100 in single precision workloads; from what we can tell, A100 will beat it in about everything else. Because of this, AMD is focusing on HPC, AI, and machine learning applications for MI100 and wants to sell it to the oil/gas industry as well as academic markets. Finally, one important note about MI100 is that it has no graphics pipeline. What AMD said about making a GPU solely for compute workloads is absolutely true.

The actual die and package of MI100 is something we don’t have complete info on, but it is certainly much larger. It still has 4 stacks of HBM2 (just with more capacity per stack). The die size of MI100 seems to be around twice that of MI50, perhaps roughly 750 mm2. Either way, it is certainly a large GPU, far larger than anything AMD has made recently.

In the below image, you can see that AMD is claiming internally that MI100 scales very well with GPU count, almost 100% scaling at 32 GPUs. Though AMD only allows up to 8 GPUs to be linked together, clusters of GPUs can presumably also be linked together, which makes high GPU compute density possible on AMD systems.

AMD’s main competition is Nvidia with its new A100 GPU, but like we said before, MI100 can only really go toe to toe with A100 in single precision. AMD will offer better total cost of ownership (or TCO) in this segment, however, so MI100 could be particularly attractive in this segment. Additionally, Intel is also entering the market with Arctic Sound M, which has some AI and machine learning capability. Arctic Sound P, on the other hand, is more focused on the segment RDNA2 is soon to debut in.

That’s about it for this leak. We’ll have more (different) info coming out soon, so stay tuned.