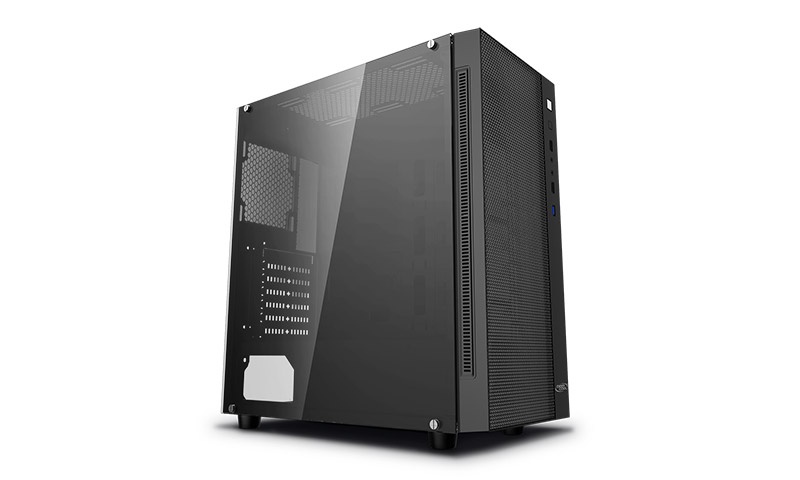 I recently reviewed DeepCool’s AS500 budget CPU cooler, and found it to be the best budget CPU cooler I’ve tested thus far. That made me interested in their cases, so today I’m looking at their Matrexx 55 Mesh case, a budget case which typically costs around $60 USD.

Taking a look at it’s dimensions, it is 440x210x480mm – making it an averaged sized mid-tower case. It weighs 6.6kg (14.5lbs). The case is comprised of mainly SPCC Steel, with some plastic on the front cover, and a tempered glass side-panel.

The front panel is flat with mesh on the left and a ABS right side where you’ll find the power and reset buttons, 1x USB 3.1 connection, 2x USB 2.0 connections, and audio in/out connections. There is ventilation on both the right and left sides of the front panel.

At the rear you’ll find the standard exhaust, 7 PCI-e slots, and PSU Shroud. The PCI-e slot covers do not re-attach once removed, so take care not to remove them unless you have a device which will utilize the slots.

The back side panel is a basic, no frills panel – as you would expect from a budget offering. The other side panel is tempered glass secured by 4x easy to use thumb screws, which are protected with rubber grommets.

Removing the front panel reveals the included 3x 120mm fans, which are a variation of the Deepcool CF 120 ARGB which have been streamlined for cost – providing 56.5CFM at up to 1500RPM. These are 3-pin connections, so unless your motherboard allows for voltage speed control you will not be able to alter their settings. There is also an additional fan on the back exhaust. Since these fans are RGB , here’s a GIF of the RGB in action using the default settings with my motherboard. The picture doesn’t show it very well, but it alternates in Red, White, and Blue.

I liked these fans because they were very quiet, this case was even quieter than a BeQuiet Silent Base 802 Window with it’s case fans set to the lowest setting. However, the fan housings are very brittle. If you intend on moving them, take care when installing them – I broke two corners by accidentally screwing them too tightly.

Dust filters are included on the front panel, top, and bottom of the case.

The interior has enough space for most things a PC builder would want, including motherboards of up to EATX size, however one needs to be careful when choosing CPU coolers. The very largest of air-based CPU coolers might have some difficulty fitting into the case properly. Specifically, I was able to install Noctua’s NH-D15 Cooler – but only with a single fan. Installing the 2nd fan prevented putting the tempered glass side panel back on.

Overall, I was very satisfied with this case. It was extremely quiet, and temperatures were “margin of error” compared to NZXT’s H440 (some things I tested were slightly better or worse, overall it was a draw). It’s noise levels were extremely quiet, slightly quieter than BeQuiet’s Silent Base 802 Window.

Honestly, I expected worse from a case of this price level. Because it provides low noise levels and decent thermal performance while at a very budget price, I give it our Gold award.