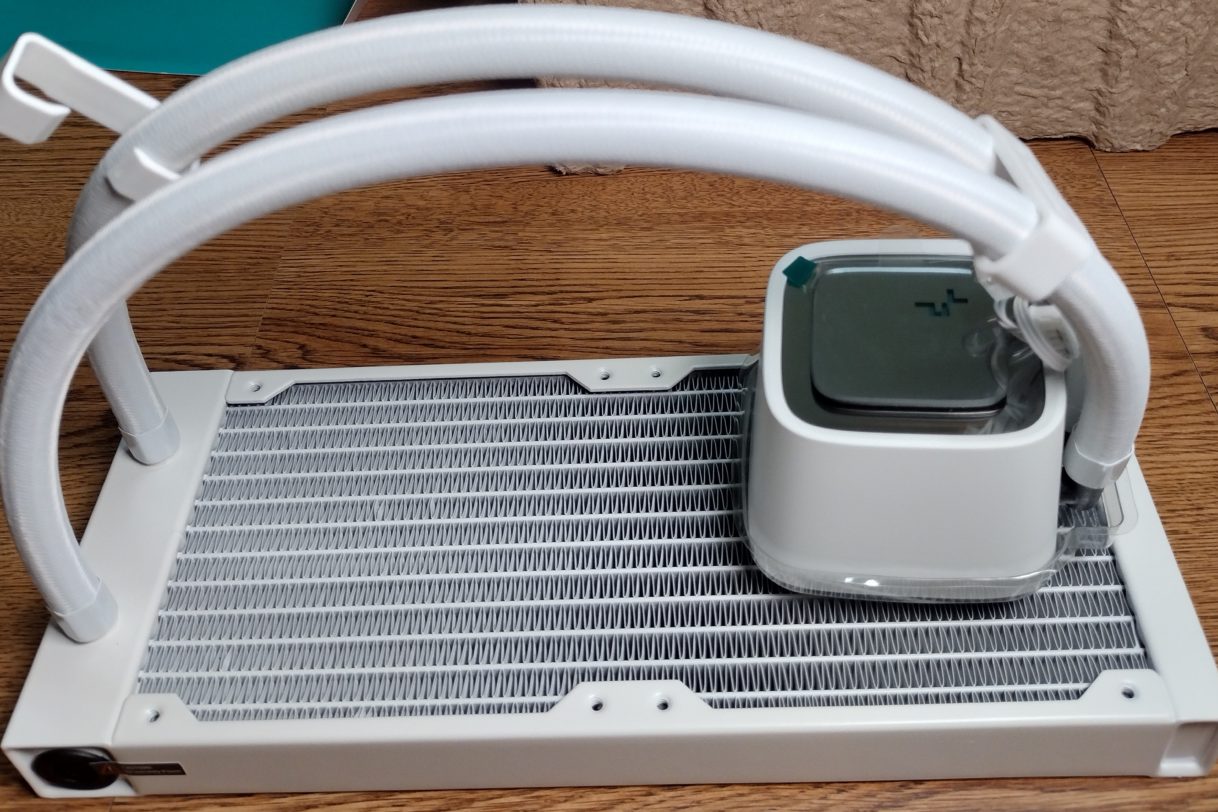 Today we’re looking at DeepCool’s newly released LS520, a 240mm version of the previously reviewed DeepCool LS720, which utilizes a 4th generation in-house pump designed by DeepCool. This is somewhat unique, as most AIO coolers on the market are based on Asetek designs.

Prior to this review, most coolers I’ve tested have struggled to keep the 12900k under TJMax in demanding scenarios when power limits are removed. With previous generation Intel CPUs such as the i9-11900k or i9-10900k, a good cooler could handle up to 300w loads – but due to the increased thermal density of the 10nm++ Intel 7 manufacturing process (in comparison to the 14nm process), Alder Lake is much more difficult to cool in the highest wattage loads. I’ve previously reviewed DeepCool’s previous generation CASTLE 360EX – and while it did alright when power consumption was restricted to 200w, it hit TJMax with higher wattage workloads.

Can DeepCool’s LS520, with it’s improved 4th generation water pump, tame the 12900k when power limits are removed? Read on….

DeepCool’s LS520WH is packaged in a medium sized box with molded cardboard and plastic coverings for protection.

The installation of this cooler on LGA 1700 is fairly simple – press the backplate against the motherboard, put on the standoffs, attach the CPU pump, and screw in the thumbscrews. DeepCool recommends installing the cooler in a 6 O’clock position for the best thermal performance. This is extremely important – installing the pump in any other position will result in lower cooling performance!

Like previous DeepCool products, the LS520 comes with DeepCool’s Anti-Leak technology. The video below gives an overview on how it works

Most liquid coolers on the market today are based on Asetek AIO designs, but DeepCool’s LS520 utilizes an in-house design made by exclusively by DeepCool.

The default cover of the water pump can be replaced with a design of the user’s choice.

There’s more to a cooler than just it’s heat sink. The fans included have a huge impact on cooling performance and noise levels. These fans have a unique connection system, utilizing a cord that manages both PWM and aRGB settings in one connection.

To test the limits of thermal capabilities, I have tested Cinebench with 3 TDP settings: no power limits, 200w, and 140w. OCCT small set results include only 200w and 140w results for the i9, because no cooler I have tested can keep the 12900k under TJMax if power limits are removed in this workload. I’ve also tested Cyberpunk 2077 and Assassin’s Creed : Odyssey results, as these are the most thermally demanding games I own.

For each cooler included in my results I used the thermal paste provided by the manufacturer when possible. I tested each cooler inside of BeQuiet’s Silent Base 802 Case

Since most previously tested coolers have failed to prevent the i9-12900k from reaching TJMax while running Cinebench with power limits removed, that was the first thing I tested.

OCCT’s small set stability test is very stressful, and with power limits removed will pull 270w before nearly instantly hitting TJmax and throttling. No cooler I have tested is able to keep the 12900k under TJMax in this test – and as such the results here are with TDP-limits set to 200w & 140w. The LS520 performed well here, performing a few degrees behind MSI’s S280 but better than other similarly sized AIOs.

Now some folks might scratch their heads when seeing gaming thermal results, but at stock settings the i9-12900k will use up to 123w of power consumption in Cyberpunk 2077- making it a realistic “real life” example of a medium intensity heatload. In these results the LS520 provided top of the line performance, equal to MSI’s high end AIOs.

DeepCool’s LS520 is a great cooler which provides top-tier cooling performance at a budget price. Featuring the 4th generation of DeepCool’s in-house water pump design, the LS520 provides performance similar to AIOs twice as expensive at a very reasonable price of $109.99 USD. Unless you need a fancy LCD screen on your cooler, there’s no reason to look at any other AIO in this author’s opinion.