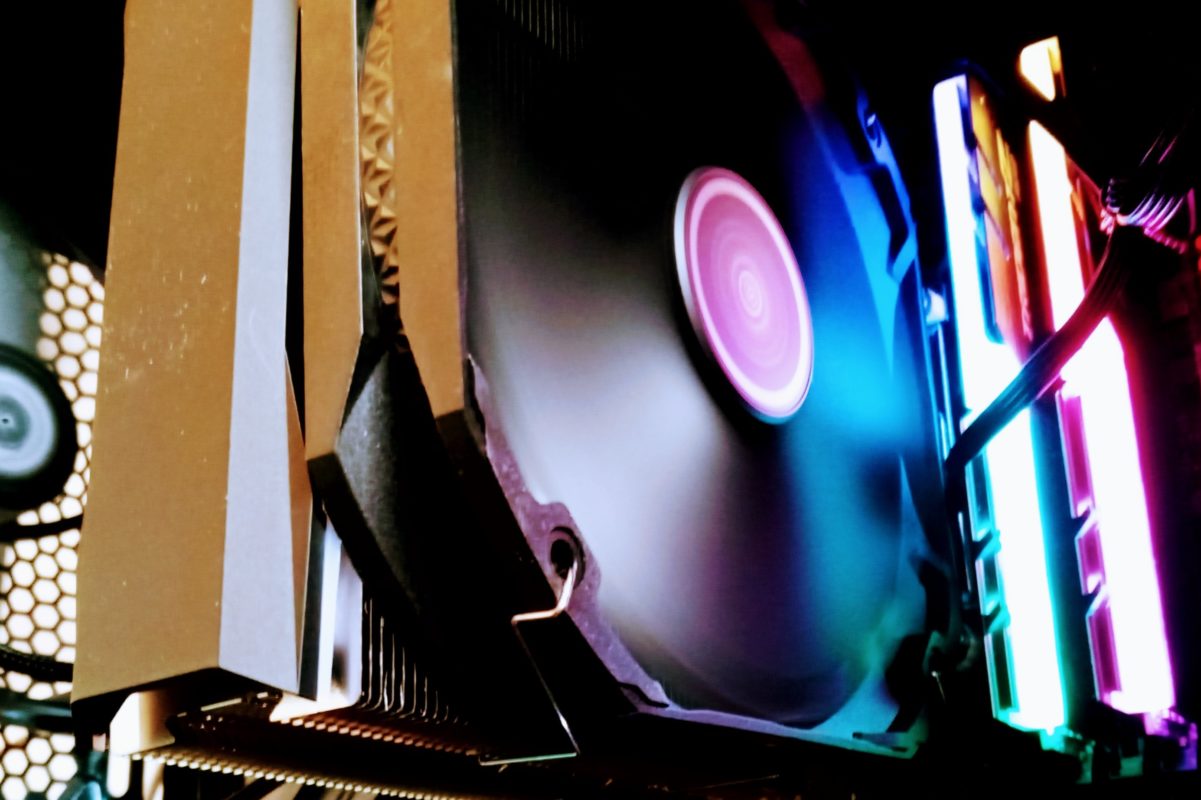 Today we’ll be looking at DeepCool’s AS500, a mid-range CPU Cooler that typically retails for $59.99 USD. First we’ll take look at the official specifications of this product.

The AS500 comes in a medium sized box, the cooler is protected in shipping with foam padding to each side of the cooler.

In addition to the heat sink and fans, DeepCool also includes thermal paste, additional fan clips so that you can install a 2nd fan for increased cooling performance if desired, RGB headers for various motherboards, and both AMD and Intel mounting kits.

There’s more to a cooler than just it’s heat sink. The fans included have a huge impact on cooling performance and noise levels. Included with the DeepCool AS500 is 1x 140mm low static pressure, high CFM 500-1200RPM fan.

The installation of the DeepCool AS500 was a breeze. I liked how the mounting standoffs included are not plastic standoffs (as most other budget cooler manufacturers use) but rather screwed in directly to the backplate. This makes installation a little bit easier in my opinion.

I tested all three coolers in the same testing conditions. My home’s computer room with central air set to 22.8c All coolers were tested using Noctua NT-H1 thermal paste.

I tested each cooler with unlimited power limits and an enforced 100w TDP (to simulate an overclocked 65w CPU, such as Intel’s i5-11600k) using both the “standard” and “full speed” profiles available from my motherboard.

Prior to testing at each TDP level, I would run AIDA64 CPU & FPU Stability test for one hour to soak the room with the heat generated from the CPU to ensure consistency in results.

I didn’t have the proper equipment to test noise levels with, but I estimate that at lower fan speeds it is similar in noise to the Scythe FUMA 2. Using the full speed fan profile it’s louder, but not as loud as the Noctua NH-U12S.

The first tests were done with a TDP enforced at a 100W limit, because most consumers considering this cooler will likely be using a mid-range CPU like the Ryzen 5 3600X. The AS500 gave an impressive showing, beating it’s competitors in every TDP limited scenario here.

When switching to the “Full Speed” fan profile, all coolers saw improvements but the most significant gains were to be found in DeepCool’s offering, further widening the gap between it’s leading performance and the competing coolers tested here today.

While TDP limited testing is interesting, most DIY users will be running their CPUs without power limits. In previous testing, the Noctua and Scythe coolers showed their limits while running the most intensive loads – running right at the 100c TJMax.

In gaming, the AS500 continues its trend of keeping cooler than it’s competition, beating the FUMA 2 by 3-4c in AC:O and 3-5c in Borderlands 3.

I was expecting DeepCool’s AS500 to be similar in performance to the other coolers I have tested. I was pleasantly surprised to be wrong and find out that it actually outcools it’s competition both in low and high TDP loads. Furthermore, in high TDP testing the AS500 maintained clockspeeds up to 107mhz faster than it’s competition.

DeepCool really provides a great value product with the AS500, and I absolutely recommend it to keep even the hottest of CPUs performing well.

As a result of this testing, I’m really curious to see how much this cooler might perform in a push-pull setup. I’ll be testing this cooler and others like Noctua’s NH-U12S in push-pull setups in a future article to examine how much of a difference (if any) using additional and/or better fans might provide.