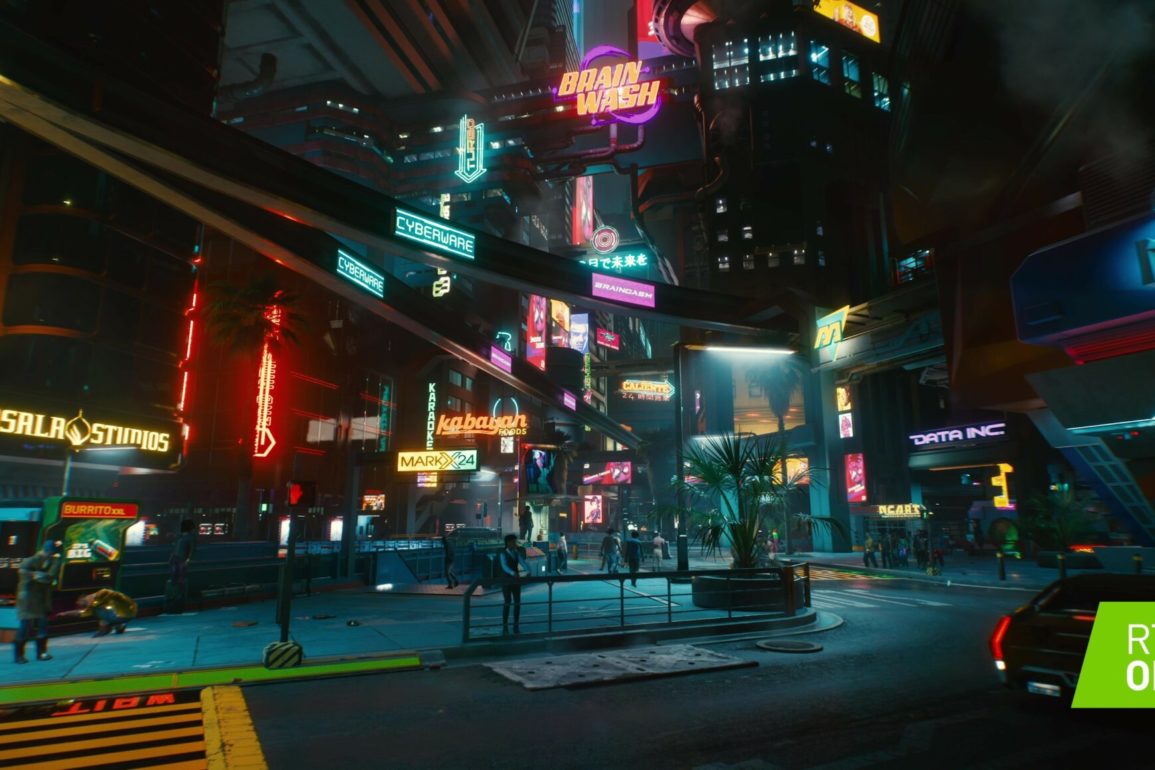 With arguably one of the most anticipated games of the decade finally released, we now know that Cyberpunk 2077 is quite a demanding beast. It features a large, open world city and rather impressive visuals (at least on PC; sorry PS4 and XBox One), it is definitely one of the few games released recently that may actually warrant much of its performance demands.

That being said, one of the more divisive features of the game is its use of Real Time Ray-Tracing, which is available only on NVIDIA RTX cards at launch. These features will make it to the Radeon RX 6000 series and the next-gen consoles in a future update. But are they worth the wait if you don’t already have a card that supports it? Today, we’ll be taking a quick look at the variety of RTRT effects the game employs and their performance impact, to see if they are really worth toggling on.

There are three different Ray-Tracing effects employed in Cyberpunk: Lighting, Shadows and Reflections. The latter two options are simple ‘ON’ or ‘OFF’ toggles, but Lighting has several options including: ‘Off,’ ‘Medium,’ ‘Ultra,’ and ‘Psycho’ modes.

Below, we’ll be breaking down what each of the settings do, and how they compare visually, turned on vs off. All of the screenshots below are taken at 1440p native resolution without any DLSS at the ‘Ultra’ preset. Motion Blur, Chromatic Aberration, Film Grain and Depth of Field have all been disabled. The images are cropped to focus on the area most effected.

Taking a look at the above comparison, we can see that ray-traced lighting allows the red light of the neon to realistically color the building with the red hue as you would expect light to do. However, the deep shadow cast under the BAR-B-Q sign above oddly doesn’t seem to be illuminated at all by that same neon lighting. The difference between the different quality presets is fairly minimal in this example.

In this example, we can see very little differences aside from the lighting from the billboards providing a more full diffusion of the underside of the overpass. You can also see a difference in the way the sunlight catches the edges of the signage, coloring with a warmer hue and making them a bit more pronounced.

An upgraded, but subtle improvement. It is clear that the traditional Global Illumination in Cyberpunk 2077 is already quite good, leaving little room for improvement for the ray-tracing effects.

Taking a look at the above comparison, it is clear that the RT reflections add additional detail compared to the game’s Screen Space Reflections techniques. The Spunky Monkey sign is much more clearly visible and you can see see some details reflected from the porta potty (toilet) structures in the darker puddle on the left of the screen.

This one is a bit more subtle, although you can a bit more detail reflected from the signs onto the car, the traditional SSR techniques still provide a very good presentation overall. However, when looking at the side of the car, you can see that the ray-traced reflections do provide a more realistic reflection of the lighting that appears off screen, particularly around the passenger side mirror. You may also notice the highly-reflective car wheel.

This is probably the most significant improvement, reflections in things like windows on buildings can be virtually non-existent using traditional techniques. However, with with ray-traced reflections on, we get basically a 1:1 representation of what is directly in front of the reflective surface, along with the proper perspectives. This is a huge improvement and makes RT reflections the most worthwhile RT effect in the game.

Ray-traced shadows in Cyberpunk 2077 are cast by sunlight and moonlight. Because of this, not all shadows you see will be ray-traced, even with it turned on. That said, in the above example, when looking at the shadow cast by the ladder, we can see that from this distance ray-tracing offers significantly more definition in the shadows compared to the traditional shadows in the game, even at the highest settings.

Once you get up closer, the difference is more subtle. Looking at the shadows of the railing, you can see an image that looks mostly the same. Taking a look at the debris on the floor, you can see that the shadows cast around their edges are just a little softer with ray-tracing enabled.

For our graphics card reviews, we use a 3rd-generation Ryzen-based test system with components supplied by AMD, GIGABYTE, Western Digital, Phanteks, Nixeus and DEEPCOOL. Without the support of these companies we could not do reports like this one. Thank you to all who support us!

For testing Cyberpunk; we do a 60-second run through the vehicle chase sequence which takes place at the end of the ‘The Rescue’ mission.

So, taking a look at the above results, we can see that compared ‘RT OFF’ all of the RT effects reduce performance quite significantly, when enabled individually. In fact, we’d say that none of these configurations are playable at this resolution and Ultra settings. Of course, then there’s the discussion of DLSS, which we’ll look at in the results below.

DLSS does provide an impressive performance increase, even at the Quality and Balanced presets. Yes, there are other presets such as Performance and Ultra Performance not shown here, but honestly we think that if you’re using DLSS, you’re likely going to want to be using one of these two presets in this title.

As for whether or not DLSS provides a significant enough performance increase to make ray-traying playable on this xx70 class GPU at 1440p? Well, not really. We’re still looking at a sub-60 FPS experience, even with DLSS on the ‘Balanced’ preset with only RT reflections enabled.

Cyberpunk 2077 is one demanding and very beautiful game. Yes, the included real-time ray-tracing effects are quite nice, and do mostly provide a noticeable improvement to overall visual fidelity compared to traditional rasterization effects. Still, most of the effects like lighting and shadows are fairly subtle.

Personally, I believe that RT reflections provide the most noticeable increase in visual fidelity and that is likely the only of the three effects I would enable in this title, due to performance concerns compared to quality gain for that FPS hit. Now, looking at how it performs in our tests, I would say you’d likely want to leave it off if your aim is to play at 1440p:60 and you have a graphics card like an RTX 2070, 2070 Super or RTX 2080. If you’re one of the lucky few who managed to get their hands on an RTX 3070 or RTX 3080, those GPUs will likely have enough headroom to allow you to maintain 60 FPS with one or more of the effects turned on. Unfortunately, we don’t have any to test, but I’d say its a safe bet.

If you don’t have an RTX-enabled graphics card, I wouldn’t worry too much. The game is beautiful even without any ray-tracing effects turned on. CD Project Red did a fantastic job with the visuals in this game and the traditional Global Illumination and Screen Space Reflections are still some of the best we’ve seen in any title, which is very impressive for a massive open world game.

Let us know if the comments what you think about Cyberpunk 2077 as well as what you’d like to see us test in future reports.