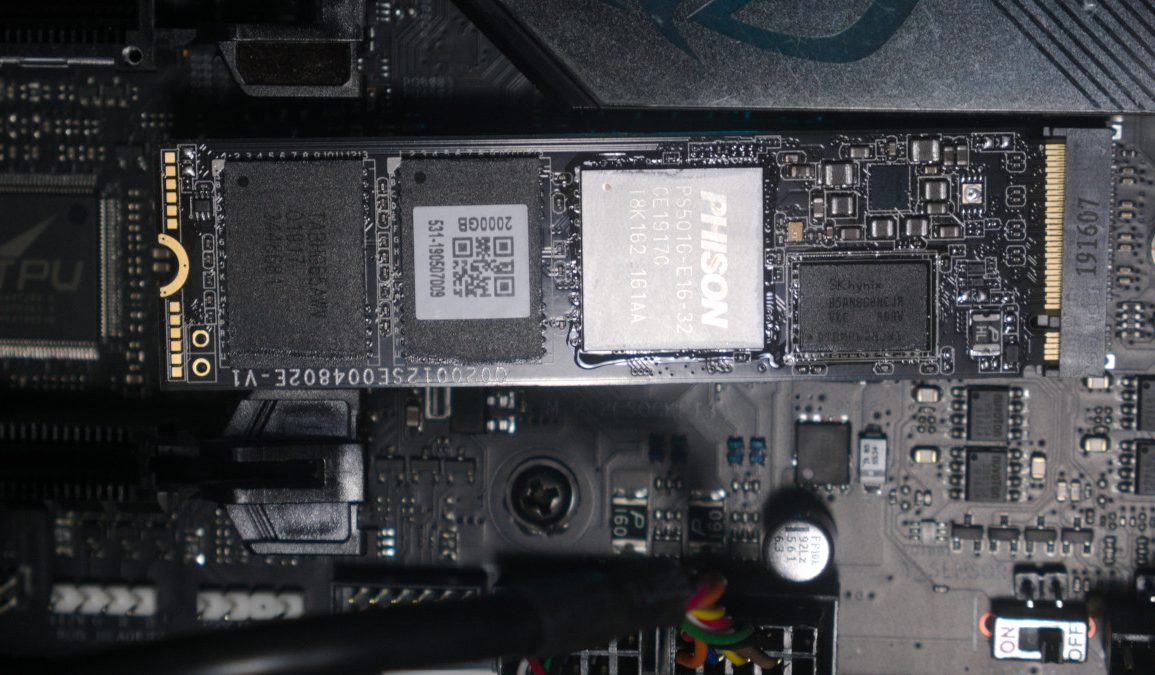 With the introduction of Ryzen 3000, and the X570 chipset, PCI-e 4.0-based SSDs are finally here. Corsair along with Gigabyte are the first two major brands releasing PCI-e 4.0 drives, which by the way are fully backwards compatible with PCI-e 3.0 equipped motherboards albeit at a lower speed.

The reason one might want a drive that is PCI-e 4.0 that NVMe drives have been hitting the top end of the PCI-e 3.0 bandwidth cap in sequential reads and writes for a while now. While this wont effect 4k reads a whole lot it will make a dent on more sequential workloads.

The drive uses a Phison PS5016-E16 controller which AMD rumoredly invested $15 million into to get it out in its 9 month turn-around time. As for the NAND itself it uses Toshibas 64-layer 3D TLC NAND which is standard compared to most other high performance SSDs. The main change here is the addition of doubling the possible bandwidth with PCIe 4.0.

This is the first review I have done with the Ryzen 3000 and X570 platform, I am moving on from the previous generation Ryzen CPUs for future compatability with PCIe 4.0 drives and higher IPC/Clock speed to remove any bottlenecks that would have occured on the previous platform. Some changes that have been made are as following: Testing all performance metrics at 50% full in order to get a more realistic testing scenario, testing all NVMe drives as OS drives and adding more real world testing.

Also I would like to thank AMD for supplying us not only with the CPU and motherboard used in this review but also the SSD we are reviewing today.

Taking a look at the results here we see the MP600 with a win across the board. while the 32MB and 1MB speeds can be explained by the PCI-e bandwidth jump the 4KB and 1KB speeds would almost entirely be due to an improved controller.

CrystalDiskMark is a disk benchmark software made by a Japanese coder named Hiyohiyo and is one of the simplest and most frequently used tests for storage due to its simple and easy to understand UI. It measure sequential reads/writes speed,measure random 512KB, 4KB, 4KB (Queue Depth=32) reads/writes speed,select test data (Random, 0Fill, 1Fill).

Here we see a rather massive performance uptick as expected in Crystal Disk Mark, though 4k single thread performance remained relatively close all of the other tests here showed at least a 20% boost.

AS SSD is the opposite of ATTO as it uses incompressible data rather than compressible data and simulates the worst possible scenario imaginable for an SSD which gives the best understanding of performance when pushing the drive to its limits.

Yet again we see performance on this drive outpaces the others in everything except 4k writes oddly.

Anvil’s Storage Utilities benchmark may be a up there in age, but it’s still very much relevant today as it is VERY taxing on the drives used. It pushes for several performance and response time metrics and gives a score in read and writes then delivers an overall rating, which is useful to see where an HDD or SSD slots in general performance and is one of the easier tests for someone to pull from.

Performance here sits exactly where I would expect with the MP600 pulling ahead by around 25% in one of the harshest synthetics we have in our suite.

In Diskbench we do two file transfers, one a full install of the Witcher 3 i’ve kept seperately and free from updates which has mixed file sizes and secondly a large batch of game recordings that comes up to around 200GB that should fully stress these drives out.

Here we see how fast the MP600 is pushing almost 20% ahead again compared to the firecuda 510 and the BPX pro lags behind, likely due to the amount of capacity used in the video files.

In our game test here we use FFXIV Stormblood because well, it can be easily recorded and as a standalone benchmark it doesn’t need authentication on each system. The load times in this game are rather long as well.

FFXIV actually shows the only case of the Corsair drive trailing, this is something I will be investigating in the near future in another article.

Looking at all the data I have collected today, the Corsair drive is definitely faster than the competition and with the exception of a few tests wins by a significant margin. If you are planning or already have picked up an X570 motherboard and a Ryzen 3000 CPU and are looking at adding a bit more storage anyway, there is a serious performance benefit here to be had, even though the drive is priced a bit more than some of their competitors I would argue it is worth the added cost.

That being said those looking for the lowest cost per GB need not apply since SATA and much cheaper and slower NVMe drives like the Intel 660P will come out cheaper.

Speaking of costs the MP600 comes out to $259.99 for the 1TB and $449.99 for the 2TB which is actually cheaper than the 2TB Samsung EVO 970 and WD Black SN750s, though the Seagate FireCuda 510 tested here is priced $50 cheaper which could make it an interesting choice, though again for the best performance here the Corsair Force MP600 seems like a very solid pick for those looking to get the most out of their X570 motherboards.

I was very impressed with the Corsair Force MP600, in fact I’m giving it our first ever Adored Innovation award. Corsair deserves a lot of credit for being one of the first manufacturers to bring PCIe 4.0 drives to the market.