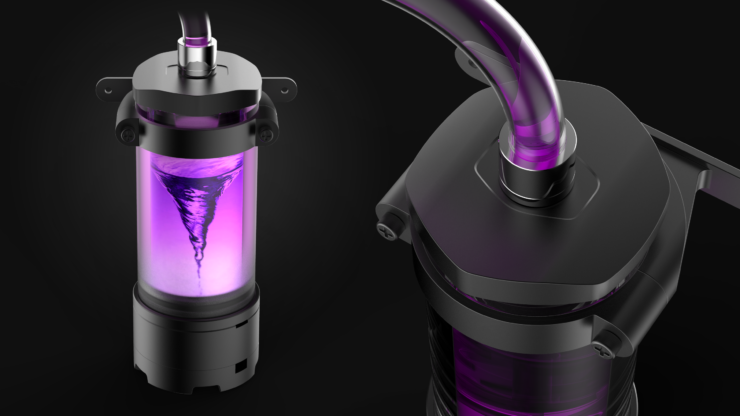 Earlier this week we covered Cooler Master’s case updates, and now we’ll be taking a look at their coolers which they were originally known for. Everything from AIO coolers with a dual pump to air coolers. They’ve also launched a few peripherals as well.

This cooler is designed using Cooler Masters “Vertical Vapor Chamber” technology. Instead of using heatpipes to transfer heat from the CPU it uses a vertical vapor chamber as seen in some previous Nvidia graphics cards. They’ve gone with a U shape which they say will distribute the heat onto the fins to be cooled down by dual 140mm fans. It won’t be cheap though and will be hitting store shelves in December 2019 for $129.99.

Cooler Master also has a low profile design for small form factor builds, the MasterAir G200P and G400P, the main difference with them is the G200P will have 2 heatpipes and the G400P will have 4 heatpipes. These both will use a 92mm fan and may include RGB lighting.

The MasterLiquid Dual Pump AIO is Cooler Master trying to have a new take on AIOs, it has a dual chamber design on both pumps this is targeted to improve cooling performance to increase the flow rate and flow pressure of the coolant on the block, they say this will dissipate heat much faster compared to traditional designs. We do not have pricing or availablity information for these products.

The MasterLiquid ML240P Mirage is a simple single pump design without a fancy reservoir but does use a transparent pump cover showing the impeller and has 8 ARGBs around the rim of the pump which should generate a cool effect for those who really care about the rainbow RGB effects.

Cooler Master also put the Cooler Master SF series of case fans which have been designed with a square fan frame for more direct airflow and pressure. The new square shape of the SF-R ARGB series provides more surface coverage on AIOs and air coolers. The SF120R ARGB, SF240R ARGB, and SF360R ARGB will be available in different sizes of 120/240/360mm with integrated fan frame design.

The MasterFan SF120M is Cooler Master’s first Maker edition fan with a patented square 120mm metallic damping fan frame. The metallic frame is strategically placed on the fan to reduce vibration. The double ball bearings should reduce friction and can be mounted in any direction without affecting fan performance. The noise level is limited to 26 dBA and cooler master considers it to have performance level of an industrial fan.