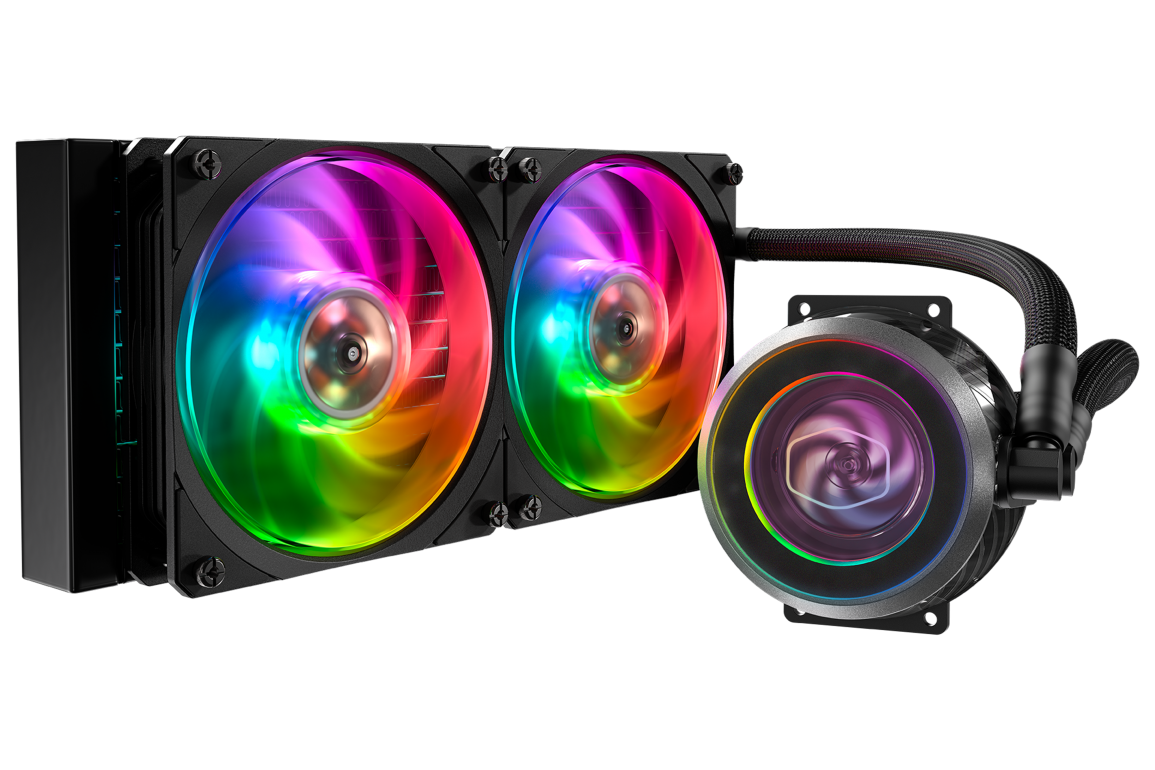 Today, we will be looking at Cooler Master’s high end MasterLiquid ML240P Mirage AIO, which has a 240mm long radiator and a focus on RGB lighting. We’ll be putting it head to head with the classic NH-U12A from Noctua and Arctic’s Liquid Freezer II which we just reviewed recently. Thanks to Cooler Master for sending this AIO in.

The ML240P is a typical 240mm radiator equipped AIO that focuses on aesthetics and RGB in particular. It has two 120mm fans with RGB and the pump is transparent (letting you peek at the impeller inside the pump) as well as lit up by RGB LEDs. As for accessories, Cooler Master has included an RGB control hub, a bundle of RGB cables, a tube of thermal paste, and just a cascade of mounting brackets and associated hardware. I do not exaggerate when I say there are a dozen (or more) plastic bags that come with this cooler.

I certainly can’t fault Cooler Master for including a mounting bracket that is compatible with several AMD *and* Intel solutions (with just a single backplate no less), but there are so many bags of mounting hardware that it’s hard to ignore it. I have my criticism of their mounting hardware (which might be an industry wide issue at this point) but I’ll save that for the end.

The RGB accessories are quite comprehensive; I was actually overwhelmed by how many RGB cables there were included, as well as the hub for connecting it all. While that certainly deterred me from checking out the RGB features, it certainly does impress me that there seems to be so many options.

Currently, the ML240P is about $160 on Amazon, making it one of the more expensive 240mm AIOs, though compared to other brands perceived as high end such as Corsair, it’s not that more expensive. But, yes, it is quite expensive.

Being 60% more expensive than the U12A and twice as expensive as the Liquid Freezer II, the ML240P will need to deliver a significantly better experience in some way, whether it’s through RGB or performance. I wish I had something like Corsair’s H115i which is more comparable to what Cooler Master has, but I think this will at least be a good performance comparison.

If you’re curious why we test two Ryzen CPUs and both thermal paste and pads, I recommend reading my Ryzen 3000 thermal analysis.

As we can see on the 3700X, the race is rather close when using paste but when using a pad the Liquid Freezer II and ML240P fall behind, with the ML240P falling the most. At least the ML240P is competitive with the other AIO in this part.

Perhaps the ML240P can score some victories in noise performance? Well… it’s not far behind the Liquid Freezer II and it’s actually quite a bit quieter than the U12A. But what this graph won’t show is that the ML240P was quite whiny and high pitched as it got louder and louder. So it was certainly the most audible since the U12A, while technically being louder, was not whiny at all and its fans operated at a very low pitch.

When testing the fans themselves, we can see that the ML240P at 25% is actually louder than the ambient noise of 40 dba. At 50%, the Ml240P is still the loudest cooler, just barely though, but it should be noted that the Liquid Freezer II still isn’t louder than ambient at 50% speed. Finally, at 100% speed, the ML240P wasn’t the loudest cooler, but it sure was the most audible thanks to its somewhat high pitch.

So, with all that data, it’s not hard to think that the MasterLiquid ML240P is perhaps overpriced. At $160, it was losing noticeably against the Liquid Freezer II, an AIO half the price. It did faire much better against the U12A but Noctua’s small, premium air cooler is still considerably cheaper. At this price, the ML240P cannot be considered for its performance alone. It will have to come down to other features.

Let’s talk about mounting hardware, first of all (or you can skip this paragraph and the next two if you don’t care). Cooler Master’s mounting hardware is almost as bad as the Liquid Freezer II’s for the totally opposite reason. It’s just so complicated, there’s at least a dozen bags all with screws, brackets, and other mounting hardware related things. None of them are labeled either which is a little annoying, and it took a little while to figure out exactly what I needed. So that’s strike one. On it’s own, not a big deal.

Then we have the actual assembly of the mount. Cooler Master actually includes its own backplate for both Intel and AMD (not just AM4 but much older sockets too) which is great, but putting it together was needlessly complicated. There were clips and and some weird threaded bits and I had to put them together. It really confuses me why Cooler Master thought they needed so many pieces to put together just for a backplate. That’s strike two. On it’s own, again, not a big deal.

But the worst thing is that at the end of all that, the double sided screws that held the backplate to the board (which is a huge step over the Liquid Freezer II already) didn’t actually lift the backplate against the board entirely, meaning the screws were a little short of the brackets attached to the AIO, meaning the thumbscrews that were supposed to bring this package together couldn’t get threaded, which ultimately meant I had to hold the backplate up anyways, just like with the Liquid Freezer II. I also couldn’t use a screwdriver on one of the thumbscrews because the pumps got in the way. That’s strike three.

So, that’s my rant about mounting hardware, which isn’t really doing any favors for the ML240P except in seriously excellent compatibility for both AMD and Intel. What about RGB? Well, truth be told, I never experienced the RGB functionality on the ML240P. I’m just not a fan of RGB. But, there are people out there that do value RGB, and I can tell just by looking at the accessories that Cooler Master is trying to appeal to those people. This AIO has alot of RGB and not only that but Cooler Master enables adding more RGB with that hub they include.

So, I guess you just have to ask yourself whether or not RGB is worth $60-80. For me, no, it’s not, I’d rather have the U12A or the Liquid Freezer II. But maybe there are some out there that would pay more for RGB. And I’m sure it would look nice, too. But, again, is it $60-80 nice? That’s an important question you’ll need to ask yourself before buying one of these.

However, when it comes to performance, the ML240P is not a leader, but it is certainly priced like one. That’s not to say this is a poor performer; the ML240P did fine, in its worst cases it was just barely behind. But at $160, it simply doesn’t make sense from a perspective of value. I can only recommend this AIO to RGB enthusiasts who are okay with having good, but not the best thermal and noise performance.